When I mentioned that I had set myself the challenge of a pumpkin recipe a day for every day in November, my step-daughter suggested that I include a recipe for pumpkin manju. I had no idea what that was but a little research told me that they are a kind of Japanese sweet.

Japanese sweets are quite unlike any sweets we get in the UK. I first discovered this back in 2013 when my step-daughter took me to the Japanese sweet shop just off Piccadilly Circus. We bought an interesting selection of things from that shop and each of them were almost a cross between an elaborate jelly sweet and a beautiful French patisserie. However, the jelly effect is achieved either with beans or rice so they are suitable for vegans and people who wouldn't eat gelatin. 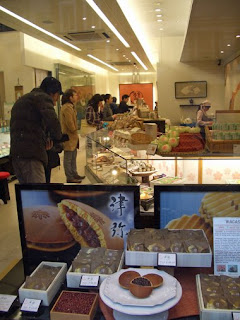 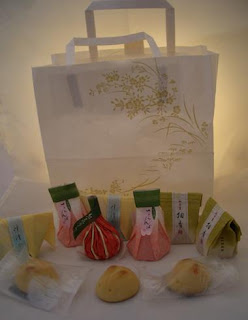 My step-daughter usually brings us back a box of mochi from her holidays in Japan and these again are unlike anything we would consider a sweet in the UK. With an unusual gooey, springy texture, they are often flavoured with peach or green tea and dusted with cornflour so are not unlike Turkish Delight in mouth-feel. Having decided to have a go at making them last year, I discovered that the filling is made from sweetened azuki bean paste and the outside is made from a glutinous rice flour. They were, indeed, unlike anything I had ever made before and very tricky! Anyway, my step-daughter declared them authentic and ate most of what I had made. 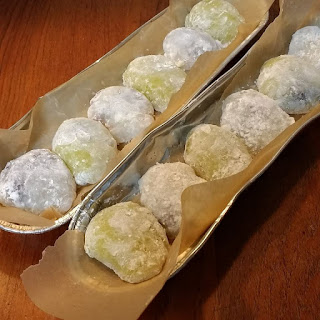 So, now my challenge was to make manju - another type of sweet - but this time I had no experience of even eating them. It is really quite difficult to make something when you don't really know what it is you are trying to make - as I'm sure the average Great British Bake Off contestant would tell you after the baking challenge.

Anyway, a search on google came up with a recipe at the very top that looked tasty and achievable and I had all the ingredients to hand, including some of my very own homegrown sweet potato. 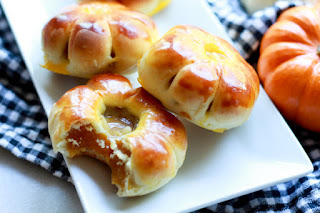 So off I went and created my first batch of pumpkin manju. They didn't look quite as pretty as the ones in the photo online but my family descended upon them and ate all by two of them in the first sitting. They were like a soft biscuit with a sweet filling. Needless to say, the next day the biscuit bit had gone soggy so it was just as well we ate most of them fresh. Having said that, I will definitely be making them again as they were very nice and I liked the idea of them containing both pumpkin and sweet potato. 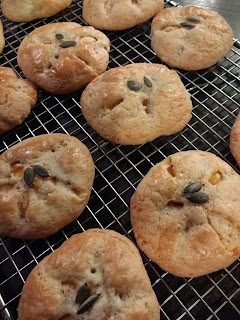 Later, I sent a photo of my pumpkin manju to my step-daughter to ask her if she thought they looked anything like the real deal. Quickly her reply came back, asking if I had baked them. Yes, I had, I told her, as per the recipe. Oh no, she replied, manju are never baked, they are steamed. I sent her the link to show I wasn't going crazy and she said that it really wasn't an authentic manju recipe so she sent me an alternative link.

This weekend I tried again to make pumpkin manju. I don't know what it is with the Japanese culture but they all seem to be so good at beautiful and precise craft so I found making manju a bit of a struggle. It is very easy to overfill the dough and then the filling tends to burst out unattractively. Of the 10 that I made, I had two that looked about right. I steamed them as I would a bao bun and the resultant texture was about the same as a bao bun - like a dumpling. 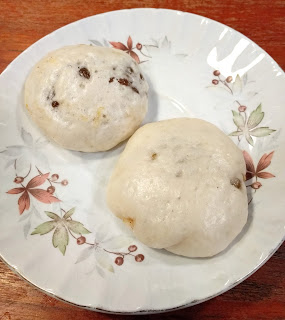 I confess the family did not fall upon this box of delights in the same way as the first attempt. Instead they eyed them suspiciously and prodded them with a finger, raising a questioning eyebrow. However, they all bravely gave them a try and declared them: "Not bad actually."

A photo emailed to my step-daughter was met with approval too so I feel as if this was a success (if not also something of a learning experience). They are, as you might expect, a small dumpling with a sweet cinnamon flavoured filling and actually rather nice.

Mix together the filling ingredients in a sauce pan and bring to the boil to allow the cornflour to thicken the mixture. Cool to room temperature then chill.

Mix together the flour, sugar and baking powder then add just enough water to bring it together as a dough. Knead for a couple of minutes until smooth. Divide into 10 equal size pieces and flatten each piece with wetted fingers on a non-stick surface such as a silicone mat.

Put a teaspoon on mixture into the centre of each disc of dough then use wetted fingers to draw it up over the filling to enclose it. Place each ball, seal side down, on a piece of parchment paper in a steamer. Steam for 10 minutes then remove from the steamer to cool.