I don't know if it is a quirk of the variety of pumpkins I have grown this year or something to do with the heatwave in the summer, but I seem to have grown six or so pumpkins with extremely tough skin. I'm not exaggerating about this; I have to take a hacksaw to them to make the initial cut and then sort of prise the flesh from the outer skin. It is time-consuming and hard work and the next day my shoulders feel as if I had a session at the gym. Quite honestly, it is rather off-putting and I have to really be in the mood to attempt to tackle them.

Anyway, I read something online recently about putting whole pumpkins into the pressure cooker to cook and then dealing them with. This seems like it might be the solution I was looking for so at the weekend I used a pruning saw to remove the stem-stub from one of these pesky pumpkins so that I could fit the pumpkin whole into my Instant Pot electric pressure cooker. I stood it on a trivet inside the pot with a couple of cups of water in the bottom then sealed the lid and set it for 15 minutes. Once finished and the valve released, I lifted the pumpkin out with oven gloves and put it on a chopping board to cool. 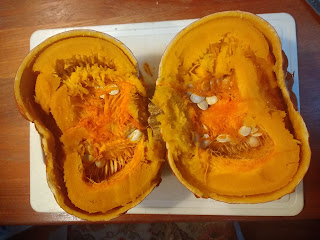 About half an hour later, I took a knife to it. The skin wasn't particularly soft even so but I could at least get a knife into it and I cut it clean in half. Inside the flesh was soft and pulpy, already to turn into pumpkin puree. I scooped out the middle seeds and goo then spooned out the fresh like the inside of a baked potato, leaving behind two shells of pumpkin that could probably be fashioned into re-usable bowls with a bit of knowledge and enthusiasm. Maybe if you have particularly greedy birds they could be used as an alternative to coconut shells to make bird feeders! 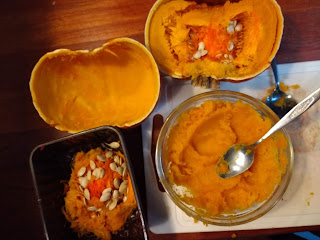 The flesh in the bowl only needed a light mashing with a potato peeler to turn it into puree and then it was good to use in any recipe calling for pumpkin puree. Such a relief! I now feel I can use up my remaining tough pumpkins without causing myself injury!

Anyway, I used 150g of the stuff straight away to make a sausage stew for my two daughters and me for dinner. This was a bit of challenge as my picky daughter had suggested she might like stew and dumplings as long as I did this and that and blah, blah... I figured the best idea was to get her down from her room and into the kitchen to discuss my plans and see what she thought. She wanted a smooth sauce and then only chunks of vegetables that she liked - sweet potato, butternut squash and carrot. And the mushrooms had to be cut up very small. And could I add some spice and some chilli? We compromised on some Cajun spice with no chilli powder. She was there to taste it as we went along and it met with her approval. Indeed, we ate it all, mopping up the last bits with some chunks of homemade bread.

My daughter wanted to know how many of her 5 a day she had ticked with this meal and I reckon it was probably about seven so she was very proud of herself. I figure that the combination of passata, pumpkin puree and other flavours would make a great pasta sauce too so I might use it mid-week for a quick pasta meal to get some more veg inside her.

Put the mushrooms into a small bowl with hot water and soak for half an hour. Heat some oil in a large saucepan then fry the onions for 3-4 minutes then add the garlic and fry 1 more minute. Add the passata, pumpkin puree and soaked mushroom and its soaking liquid then simmer for 10 minutes. In the meantime, fry the sausage pieces in a frying pan until browned, adding mushrooms a few minutes before done. Splash in mushroom ketchup and oyster sauce. Use a stick blender to blend the sauce until smooth then add the herbs, spices, sausages and vegetable pieces. Cook the stew with the lid on for 30-40 minutes. In the meantime, make the dumplings by rubbing the butter into the flour then adding the mustard, cheese and herbs and a little water to bring together into a dough. Split the dough into 6 pieces then plop on top of the stew and cook with the stew for its final 15 minutes. 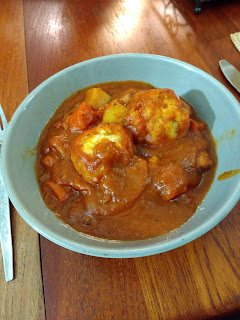