The Endless Loop of Leftovers

Sometimes I find myself in a endless loop of leftovers. I make something, which leads to leftovers and then I find a way to make that into something else, but it leads to more leftovers and on it goes.

I had a meat delivery last week. Mostly I just bag it all up into suitable portions and get it into the freezer to last a few weeks. However, I turned the 700g of stewing steak into steak pies before freezing them, cooking up the pie filling that afternoon and adding some puff pastry once cooled. The pies had circular lids so I was left with some offcuts of puff pastry.

The meat box was also supposed to contain 12 sausages, which I would normally divide into 8 and 4. We eat 8 sausages between us as one meal, and the other 4 I might turn into sausage egg muffins or add them to a mixed grill. However, I only received 1 pack of 6 sausages, which doesn't work for me in terms of numbers. Fortunately, there was a rather delicious sausage pasta bake recipe in the BBC Good Food Magazine this month that feeds four with 6 sausages so I bought some mozzerella and made that. That left a little bit of mozzerella that I boxed up and popped in the fridge. 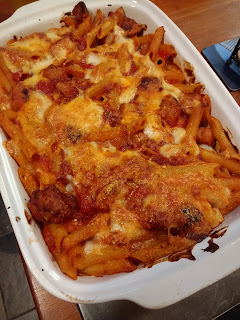 Later, I added to the off-cuts of puff pastry when I made a batch of sausage rolls (also destined for the freezer). One tray of sausagemeat only needs three quarters of a sheet of puff pastry, leaving an odd bit. Sometimes I make this into 3 or 4 cheese straws just to be done but this time I added it to the offcuts from the pies. But what to do with the puff pastry?

I had seen a recipe for Homity Pie in the BBC Good Food Magazine too and I wondered if it might be nice to replace some of the Cheddar in it with my leftover mozzerella and maybe give it a lid of puff pastry instead of shortcrust. It certainly seemed like the perfect way to use up some of the rubbish potatoes from our allotment, along with some onions and leeks from my Oddbox delivery. However, it did mean I had to buy a pot of double cream.

With the double cream purchased, I re-read the recipe and realised it was more a tart than a pie, being without a lid, so that ruled out using up the puff pastry. I also decided that Cheddar would work much better than mozzerella in terms of flavour so I didn't use that either. The pie was really delicious, and definitely one to add to my favourites, especially at this time of year when potatoes, onions and leeks are seasonal stars. 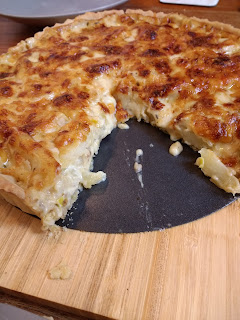 I tried it out as a lunchtime dish for my youngest daughter and me as we like being guinea pigs for new recipes but my husband was so taken with the thin slither he tried that he decided to eat some of it for his dinner.  And the remaining two portions, my youngest and I ate for lunch on Sunday. All good, except it only used half a pot of double cream so I had to think of something to do with that now.

Looking around the kitchen for inspiration, my eyes fell upon some tired looking apples in the fruit bowl so I typed "apple pudding" into Google and found a recipe for Sticky Toffee Apple Pudding, served with cream. I whipped this up on Sunday afternoon and put it into the oven to cook once I had served up the roast dinner. Despite the moment of doubt as I pour sugar water over the top of the cake batter before it went into the oven, it turned out beautifully, creating its own lovely toffee sauce at the base. And it was particularly tasty served with cream. I just had the headache of trying to fit a half eaten pudding into the fridge where a pot of double cream had previously been! 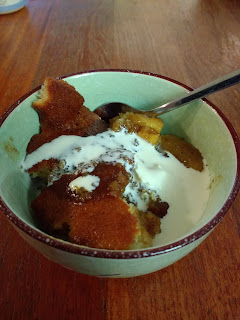 Fortunately, we reheated the apple pudding after dinner on Monday and finished off the last of the cream with it too so that at least was now out of the fridge. We had had leftover pork from the Sunday roast for dinner too so it was a good day for eating leftovers. In addition, I had a moment of inspiration Monday morning and decided to turn the puff pastry and mozerella into a mozerella and courgette tart for lunch for my youngest daughter and me. This also used up half an OddBox courgette but it meant I opened a jar of red pesto but didn't use all of it! 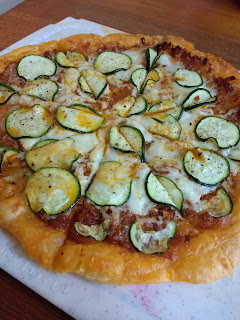 So on Tuesday I decided to try cooking up some Pasta 'ncasciate. I thought this would not only use up the aubergine I had just bought but maybe the tired looking mushrooms, the half courgette and the red pesto. I found a recipe and set about making it, realising it didn't contain either mushrooms or courgettes and that red pesto wasn't really the right thing to use for the sauce either. It turned out to be a very tasty dish and I'm pleased to have found another way to eat aubergine. 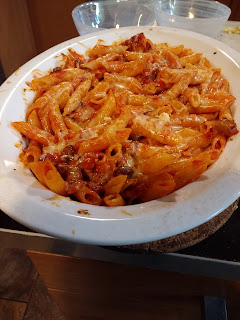 However, it made way more than I needed and once again I found myself scratching my head, wondering how to fit the leftovers in the fridge! Still, that's lunch sorted on another day, and you know what, I might even cook up the half a courgette and tired mushrooms and add the red pesto to it when I serve it up this time!

It was my step-daughter's birthday on Saturday so I cooked her up some of her favourite food. She loves Japanese food and she loves sticky toffee pudding, so that's what went on the menu. As she is vegan, she obviously required that all her food was vegan but she also requested that the whole meal was vegan, i.e. that we all partook.

The main meal was a buffet of different Japanese foods. I cooked sticky rice in my Instant Pot, baked a nasu dengaku aubergine, fried some shop bought vegan gyoza, and whilst she stir fried some tofu and veg noodles, I deep fried some tempura - pumpkin, mushroom and onion. The other addition at the table was a jar of radishes that I had pickled the weekend before.

I had received some radishes in my first Oddbox veg delivery. Despite being one of the easiest things to grow, we don't usually bother because no one really likes them. So I figured I may as well try pickling them to see if that made them more palettable. After all, my step-daughter is generally a fan of pickled things and she likes pickled diakon, and diakon (or mooli) are just very large radishes. I have to say, after they turned a pretty pink colour during the course of the week, I was actually quite excited to try them. Yes, definitely nicer pickled and definitely a very similar taste to pickled diakon. 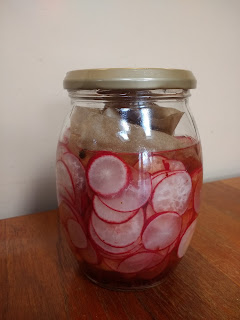 Wash the radish and pat dry then slice very thinly. Separate the slices as you drop them into a suitable jar. Add all the other ingredients and put the lid on then slosh it about a bit to mix. Leave for 1 week before eating. Eat within 3 weeks. 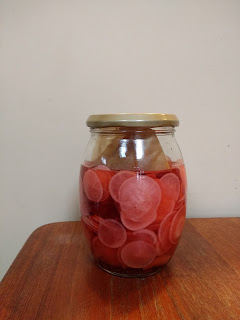 I have made vegan sticky toffee pudding a few times over the years and, in fact, I think I prefer it to conventional sticky toffee pudding because it is soft and gooey and satisfying without being overly heavy. Usually I make it as a single cake in a square cake tin and I have even made it in a hemisphere cake tin at Christmas to look like a Christmas pudding. However, on this occasion I decided to use some individual pudding tins from Lakeland. Normally I glaze the cake with some pear jam or similar but on this occasion I started by putting some of my pear sauce in the bottom of each pudding tin. To serve, I topped with a bit more pear sauce and a dollop of Oatly Oat Fraiche, although vegan custard, cream or ice-cream would have worked well too. 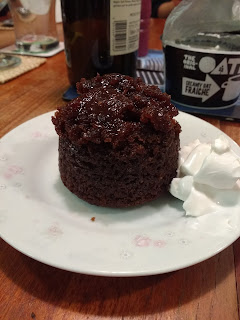 Put the dates, linseed and milk in a saucepan and simmer for 2-3 minutes until soft. Use a stick blender to blitz until smooth. Preheat the oven to 180°C. Put the dry ingredients into a large bowl and mix well, breaking up any lumps in the sugar. Add the date mixture, the oil and 50 g of jam/sauce. Stir well to form a batter. Pour more sauce/syrup into the bottom of each individual pudding tin then dollop in the cake mixture until about three quarters full. Put the tins onto a baking tray and bake for 30-35 minutes until springy to the touch. To serve, run a knife around each pudding and tip into a serving bowl/plate then heat each one for 30 seconds in the microwave. Add more syrup to the top if necessary and serve with creme fraiche, custard, cream or ice-cream. 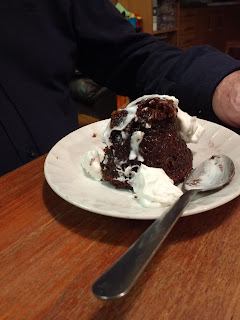