Making a meal without going shopping

We got home from a 3 week holiday on Friday and within a few moments of uncurling our stiff bodies from the car, we were stood on the plot, aghast at how much stuff had grown whilst we were away. Fortunately, my parents and my friend Sue help keep an eye on things whilst we are gone and keep picking the French beans, courgettes and other things that would otherwise go over. Between them (with a hand from Mother Nature), they had done a good job and everything was looking impressive. Within minutes we were picking French beans, courgettes, cucumbers and tomatoes. Tempting as it was to stay longer, it was late and we needed dinner. It was, however, lovely to return home from holiday and yet still have fresh veg with dinner (homemade pies from the freezer, by the way).

The next morning I found myself staring into a mostly empty fridge and wondering if I could get away with not shopping until Tuesday. Tuesday is the day I usually get my shopping delivered, having prepaid for a mid-week delivery pass. If I needed shopping before then I would either have to go out in person and wrestle with the weekend crowds (I hate shopping and I had piles of laundry, unpacking and gardening to do!), or I would have to pay for delivery. Quite often when I get my shopping delivered I then struggle to put it away because there is so little space in the cupboard and fridge and I wonder why I felt the need to do the shopping in the first place. The answer is, possibly partially habit, but also because some key ingredients are required such as milk and bread. We had bought a couple of pints of milk in the service station the day before so that was OK and I had all the ingredients in to make bread so by lunchtime we had some freshly baked bread, which we enjoyed with some tinned soup. There was plenty in the freezer and homegrown fresh potatoes and other vegetables.

In the end I concluded that I we could probably manage. Indeed, I always enjoy a bit of "making do". There is definitely something to be said about having a good rummage in the freezer and reminding yourself what's in there anyway. It's easy to think that things in the freezer keep indefinitely but of course they don't so having a purge every now and then and using stuff up is a good idea. My freezer rummage on Saturday resulted in finding a packet of diced chicken breast and some duck breast strips. That to me looked like the basis of a Chinese style meal. All I needed now was some rice, some veg to stirfry and some Chinese flavours.

The great thing about a stir fry is that you can generally add whatever veg you have to hand. From the garden we had onions, courgettes, carrots and garlic and there were sweetcorn and peas in the freezer. I usually like to chuck some celery into mix for a bit of crunch and flavour but I didn't have any. What I did have was some overly large leaf beet. I've not grown this before but my daughter likes baby leaf beet leaves in salads so we had sown some onto her little plot. Whilst we had been away the leaves had romped away and were about the size of the sole of my shoe and the stems had turned into something that looked like celery - some white and some red. I picked a few of these and chopped up the stems to throw in with the other vegetables. I then shredded up the leaves to add to the duck dish as a substitute for green leaf veg such as pak choi or spinach. 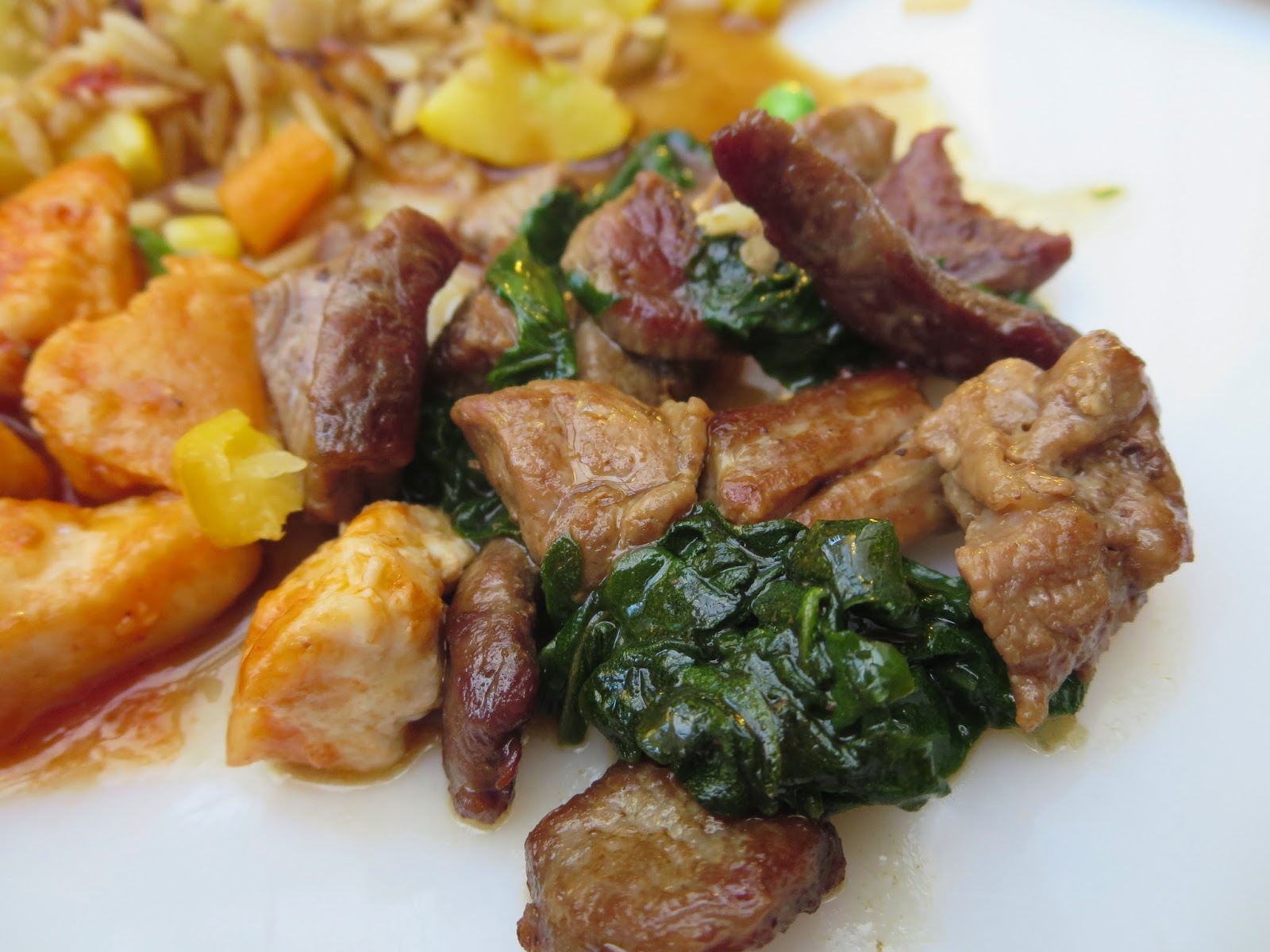 So for the meal, I boiled up some rice, fried the chicken pieces in one pan, the duck pieces in another pan and the vegetables in another. Once the rice was cooked, I drained it and added it to the vegetables with a dash of soy sauce to make some special fried rice. I would have added some sweet and sour sauce to the chicken once it was cooked but when I went to get it I realised I didn't actually have any in the cupboard. Instead, I rustled up a sauce using about 1 tablespoon of tomato puree mixed with a splash of hot water, about 75ml pineapple juice, a tablespoon of onion chutney, a dash of soy sauce and a splash of Balsamic vinegar. This I added to the chicken once cooked then left it to bubble away for a minute or two until it had reduced and thickened. Once the duck was cooked, I added some oyster sauce to the pan and diluted this with some hot water, then I chucked in the leaf beet leaves and let it cook for another couple of minutes until the leaves were cooked. 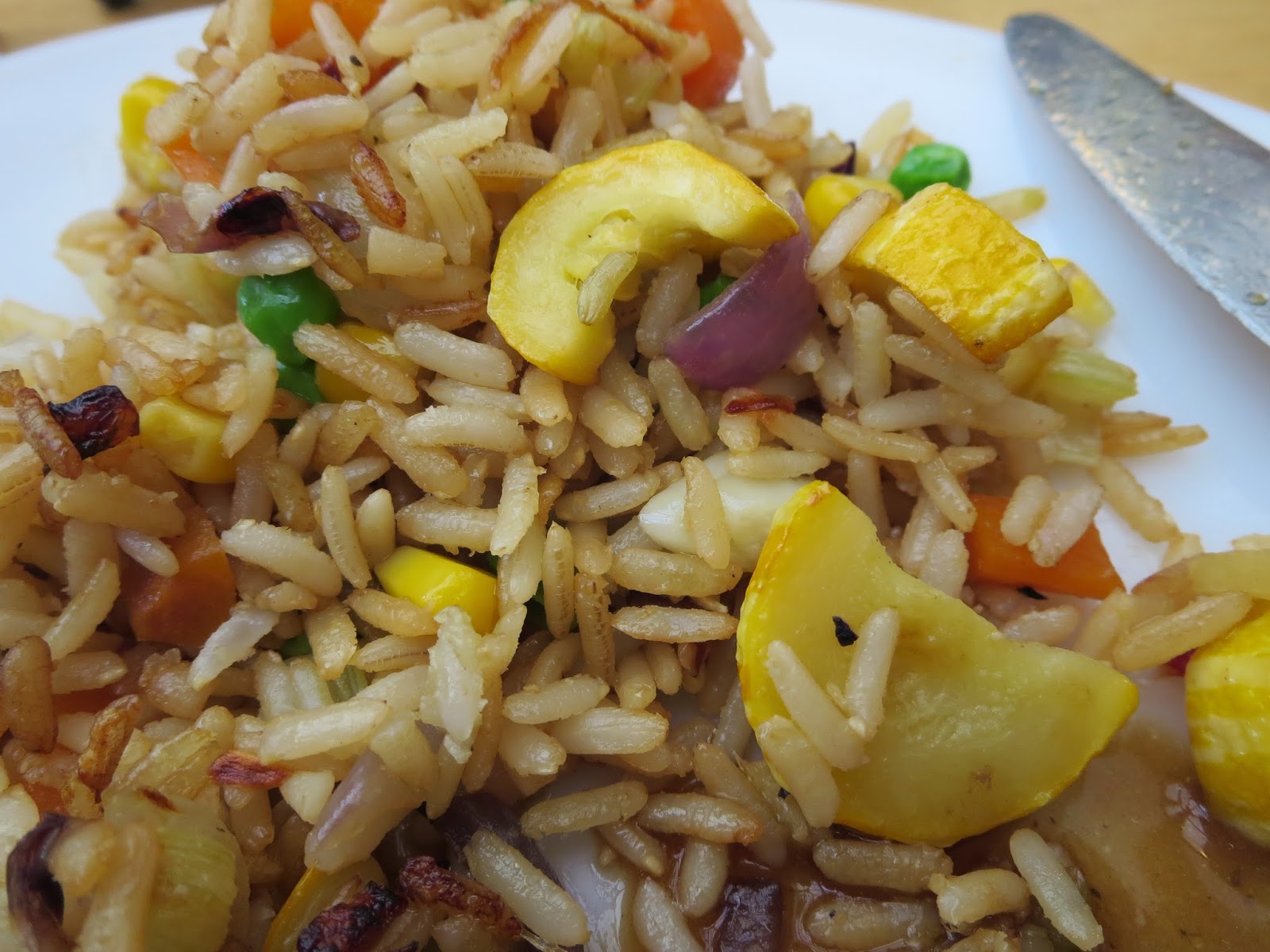 The family tucked into the meal with enthusiasm and even commented on how tasty the chicken sauce was and how much they liked the leaf beet in with the duck. They say that necessity is the mother of invention and being too lazy to go shopping had certainly made me more creative with what I had to hand. 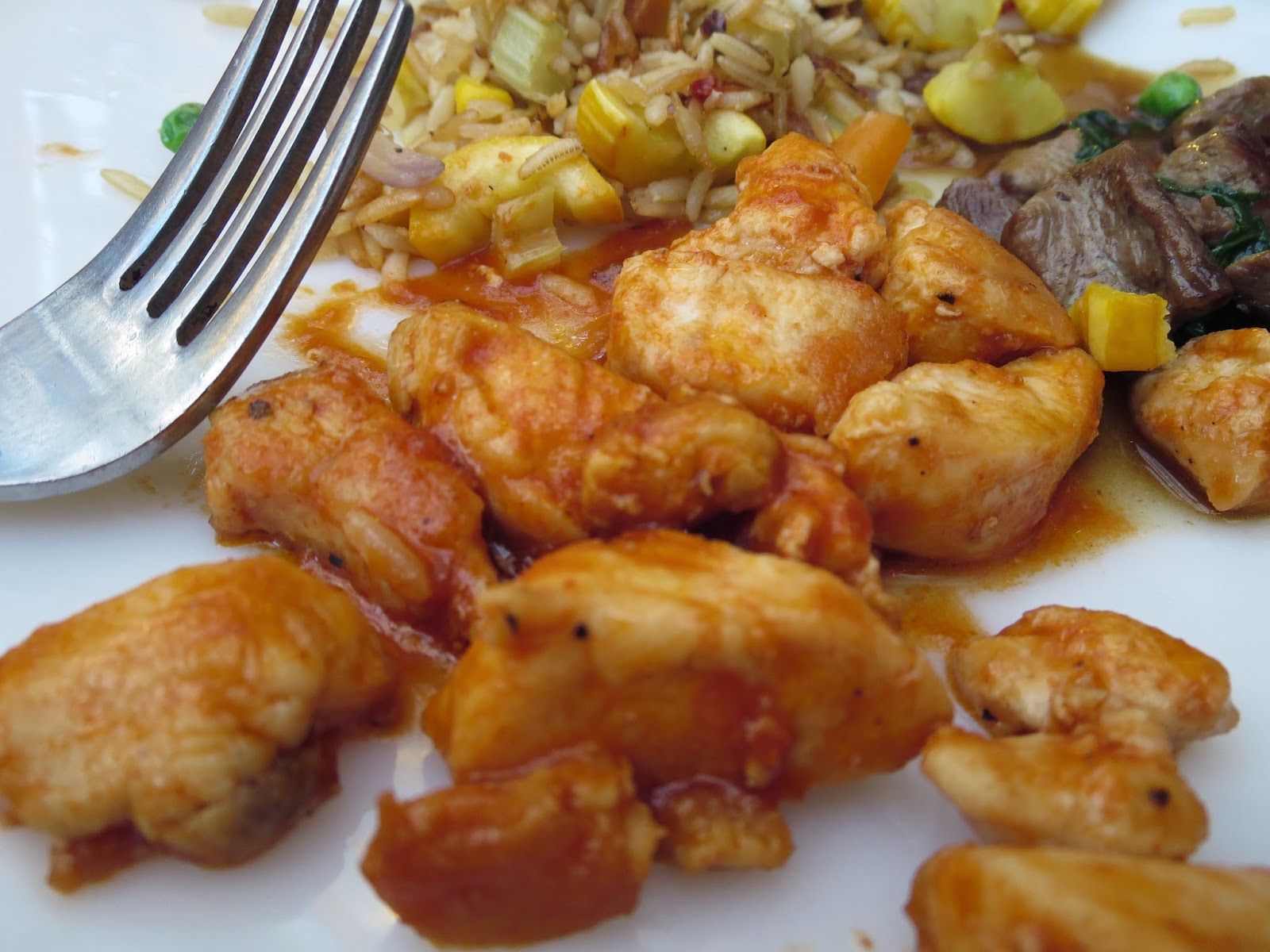 We were out food shopping the other day whilst on holiday and my husband happened to be stood near to the meat counter when the butcher mentioned that he was about to reduce a few bits by 75%. Always keen to grab a bargain, he asked him what he had on offer and a few minutes later he returned to the trolley with some sausages, 2 beef burgers, 2 slices of black pudding, a tiny lamb shoulder joint and 4 pork belly slices.

The lamb we ate that evening, roasted with some potatoes. The next day the sausages, the black pudding and some bacon and eggs made a rather satisfying “all day breakfast” type of dinner with some potato scones, baked beans, mushrooms and tomatoes.

The following day I was faced with cooking the 4 pork belly slices. It may have been a bargain but it was not something I would normally chose to cook whilst on holiday, and wrapped only in the white plastic of the meat counter, it did not come with cooking instructions. I figured that they would probably taste best if treated like barbecue ribs but without the bones. This would require some slow cooking initially and then some crisping up flavoursome final cooking. Straightforward enough but we were, of course, on holiday with limited equipment and few food cupboard essentials. 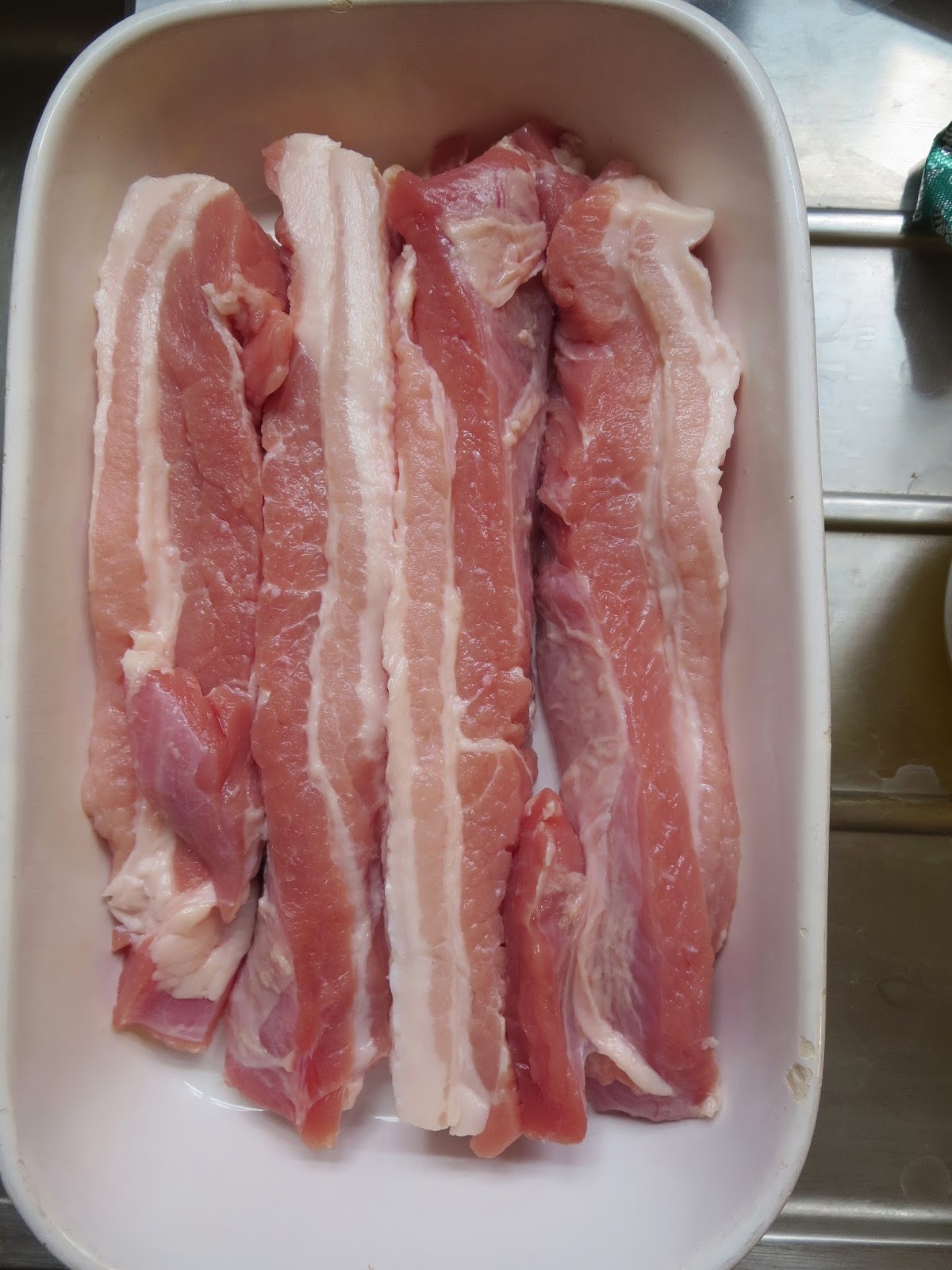 Having preheated the oven to 160°C, I went about creating some sort of stock to slow cook the belly pieces in. Hot water from the kettle was a given, but what else? We’d previously made some gravy with some Onion Bisto so I scattered a couple of teaspoons of Bisto into the bottom of a Pyrex dish. To this I added a chopped up bit of celery (which had previously been pushed too far to the back of the fridge and had been frozen), a couple of chopped up slithers of red pepper, a dash or two of soy sauce and some black pepper. To this I added the 4 pieces of meat, put on the lid and popped it in the oven for a couple of hours whilst I went off and had a bath.

After two hours, it was time to remove them from the stock and to smear them with some sort of tasty glaze that would give them a lovely savoury flavour. Again, time for a little head scratching before deciding to mix together two teaspoons each of soy sauce, mustard and tomato ketchup. This I smeared onto the pork before placing them on a baking tray and returning them to the oven at 200°C for about 20 to 25 minutes. 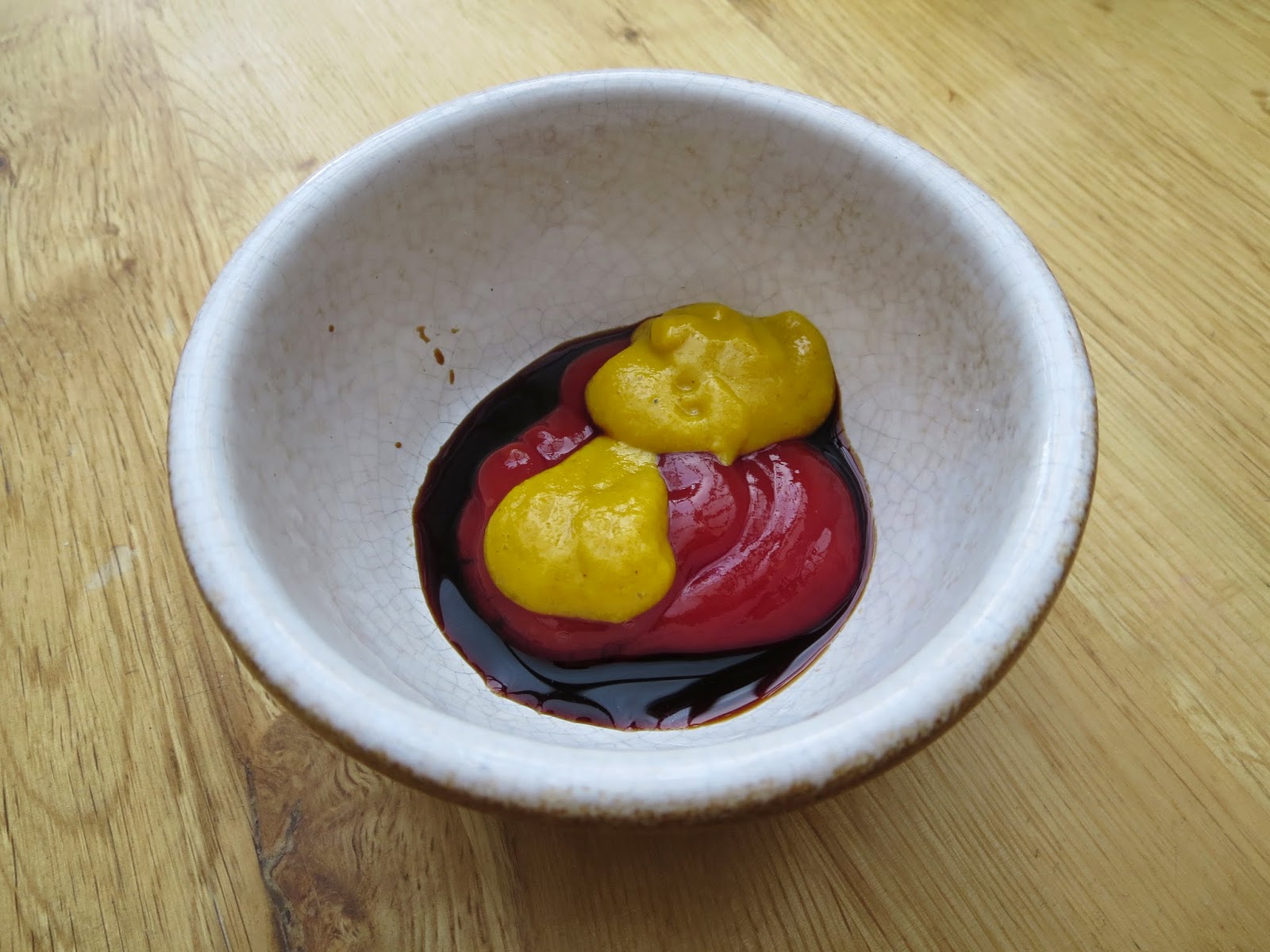 As it turned out, they were amazingly delicious; a lovely, melt in the mouth texture from the slow cooking, coupled with a tasty crispiness from the hot blast in the glaze. Definitely one to chalk up as a success and Steve was so impressed he said I should make them again when we get home. Well, maybe I will, but he needs to go out and lurk at the meat counter for another bargain first! 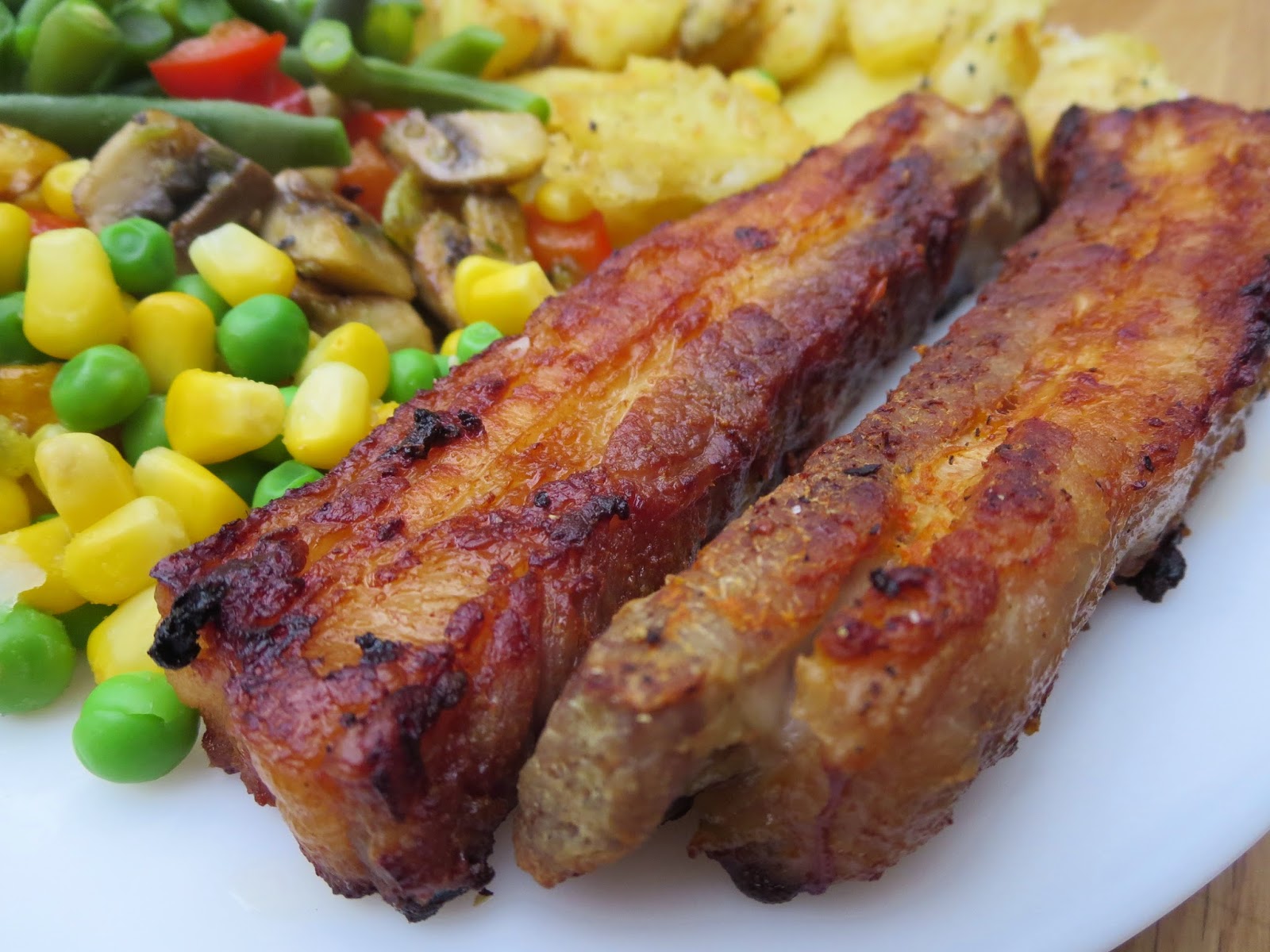