I wrote this article for my contribution to the bi-monthly lifestyle ezine Time Aside. There are 5 of us who got together to create this email magazine and we are now on our 15th issue. It is a great mix of subject matters with my gardening/recipe slot, Mrs Paintbrush's home decorating tips, Gareth's fitness advice, Clare's look at  how to achieve what you really want from life, Mark's film reviews and Angela's reiki and crystal healing perspective. We honestly write it for the love of our subjects, it's completely free to receive and there is no advertising associated with it so if 6 times a year you would like to receive a chatty and informative email please sign up here http://timeaside-ezine.blogspot.co.uk/p/subscribe-now.html

There is very little that can be done in the garden in February. Every now and then the sun comes out and I find myself getting prematurely excited by the prospect of spring. Then the next moment I find myself cycling home with stinging rain being lashed into my face by a north wind. And then I remember that it is still winter and I need to hold my horses.

Having said that, there are 3 jobs I usually try to get done sometime around the February half-term. I usually sow a few leek seeds in trays as they are incredibly slow to grow and if I don’t start early they won’t be big enough to plant out by summer. The second is to sow 4 or 5 tomato seeds in pots to get a head start and hopefully provide me with a few early tomatoes in the summer. And the last job is to sow a few peanuts.

The British weather is not really suitable for growing peanuts it has to be said and for the last couple of years the weather has been particularly unhelpful. However, I like a challenge and have been giving it ago for the past 4 years. Originally, I bought my peanut seeds from a seed catalogue, for which I would receive 3 monkey nuts, containing 6 or often only 5 peanuts. At £1.65 per pack they were quite pricey and not the sort of thing you would want to waste. Sadly, however, I often found the germination rate was poor and the seeds were prone to rotting if over watered, or drying out if under watered. So last year I decided to see if it was possible to grow any old monkey nuts and bought myself a bag of unroasted (obviously!) monkey nuts from the supermarket. At £1.50 for about 200 seeds it was at least a good deal cheaper!


From my 400g bag, I shelled 3 monkey nuts and planted 6 peanuts and a week later 5 of them had germinated.  I had to keep the seedlings on my windowsill until the weather was warm enough in June. They do, however, make rather attractive houseplants whose leaves fold in on themselves every night as the light fades. During the summer the plants produce small yellow flowers very similar in shape to pea flowers. This is not surprising as peas and peanuts are related, both belonging to the legume family. If the flowers are pollinated then, unlike any other plant I know, a long stem grows out of the dying flower and heads downwards until it finds the soil. There it buries itself and in due course a new monkey nut forms underground - hence the other name: "ground nut". As an adult I found this whole process fascinating but my kids loved it! 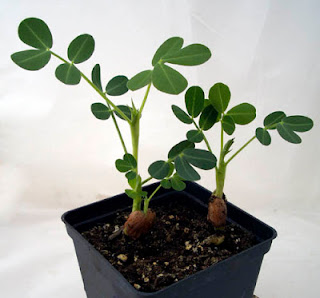 To be honest, I have never yielded more peanuts from my plants than the number of peanuts I started with but I love trying and I’m always optimistic. Surely, this year we are due a proper summer! 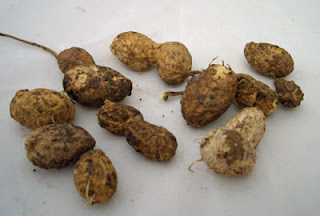 As for the rest of the bag of unroasted monkey nuts, these I roast as a single layer on a large baking tray in a preheated oven at 180°C, gas 4 for 25 minutes. My husband declared these the freshest and tastiest roasted monkey nuts he'd ever tasted! Well, hopefully only until we harvest our own bumper crop in the summer!

Today it was pancake day and it was my birthday so I was left with the dilemma of deciding whether to cook pancakes or make a birthday cake. Or was it possible to combine the two?

I first contemplated this a couple of weeks ago and asked around a bit to see if anyone had ever tried to make a "cake" from pancakes. I was quickly presented with a few links to recipes on the internet and it was obvious that this in fact was not a new idea. It seemed quite common to stack pancakes up, interlayed with creamy stuff, often including chocolate.

I mulled these recipes over for a few days but wasn't sure. After all, what I (and the rest of my family) particularly like about pancake day are the crepe-type pancakes as opposed to American or Scotch-type pancakes, and, of course, the combination of lemon and sugar. I thought my family would be extremely disappointed if I deprived them of their annual pancake experience, so what to do...?

In the end, I found a Jamie Oliver recipe for pancake cake which used what seems to be a slightly thicker than normal crepe recipe, stacked up with chocolate, cream and hazelnuts. From this I took the pancake part of the recipe and then substituted in my dead easy lemon cheesecake filling. So I managed to maintain the traditional pancake texture and flavour.

After blowing out my birthday candles, I sliced the stack as you would any other cake and served them to my eager audience with a splash of single cream. My daughter commented that the crunchy texture of granulated sugar was missing so maybe a sprinkling of this when serving could be added but other than that it was the perfect fusion of birthday- and pan- cake.

Sift the flour and salt into a large bowl. Whisk the eggs and combine with the milk. Gradually mix the liquid into the flour until a batter forms. Heat the oil in a suitable frying pan - the pancakes should be 15-20cm in diameter. Add a ladle-full of batter to the pan and swirl around. Fry on one side for a couple of minutes then flip over the cook the other side. Cool on a wire rack and repeat until all the batter is used (should yield 12 pancakes). Next, put the cheese in bowl then add the grated zest and juice from the lemons and then the icing sugar and beat well until smooth. Now stack 8 of the pancakes up, spreading each one with lemon cheese mixture as you go. Finish with a coating the cheese mixture and decorate with the jellies. Cut into wedges to serve. 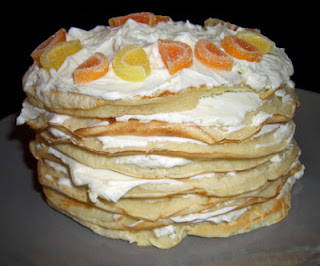 Do you have a food that you would really like to like but just can't? I feel like that about bananas. They look as if they should be so tasty and I know they are really good for you and make an ideal snack but try as I might I just don't like them. I feel the same about porridge too. It is such a good food - nutritious in so many ways and warm and filling. But no, I just don't like it.

My dislike for porridge is a real shame because I would love to eat something like that for breakfast. My husband makes it for himself every weekend morning and then manages to go right through until about 3 o'clock before needing to eat again. What an amazing food - managing to keep you satisfied for so long and being good for you.

Place all the ingredients in a pan and stir. Bring it to the boil, simmer for 5 minutes. Serve hot with a little extra milk, sugar, dried fruit or jam. 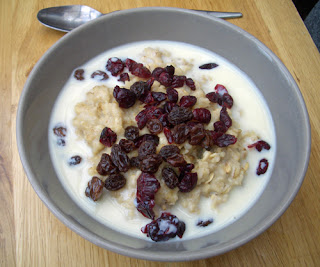 So instead of enjoying porridge, I have been bumbling around trying to find something porridge-like that I would actually like to eat for breakfast. This is why I decided to start making my Lemony Pudding recipe and eating it for breakfast.

Preheat oven to 190°C (gas 5). Boil the milk in a saucepan then add the oats and cook for 3-4 minutes, stirring constantly until thick. Add the sugar, lemon zest and juice then remove from the heat. Beat in the egg yolks and sultanas. Whisk the egg whites until stiff and fold them into the mixture. Spoon into a greased ovenproof dish and bake for 35 to 40 minutes until risen, firm and golden.

I looked at the recipe for a long time, trying to work out why it wouldn't be a good food to eat for breakfast but in the end I couldn't come up with a reason. It is, after all, heavily based on something very much like porridge, just with added eggs and flavours. I have no objection to eating eggs for breakfast as they are an excellent source of protein. And even if I made porridge, I would have to add some sort of flavour to it. My husband usually scatters brown sugar, raisins and dried cranberries over his porridge. I think I would probably spoon on some jam.

So I have been making this pudding for breakfast since Christmas. It makes a tray full that can be sliced into 8 pieces and each morning I just have to remove another slice. I like to eat it cold but it is very easy to re-heat in the microwave. It also lends itself nicely to variations and I have tried things such as substituting the lemon for oranges and adding a bit of mixed spice, or adding cloudy apple juice instead of lemon juice and adding a pinch of cinnamon.

The only downside I have found is that keeping the tray of it in my fridge can be tricky when my fridge is stacked up with other food. So when I have other demands on my fridge space, I have to turn to another solution. And this week that solution is rice pudding. Yet again another "pudding" for breakfast but when you think about it it is just a grain (rice), some milk and a little sugar which is pretty much what breakfast cereal is. It is also very economical and ridiculously easy to make.

Preheat oven to 160°C, gas 3 Grease a shallow ovenproof dish then sprinkle in the rice and sugar. Pour in the milk and stir to combine. Grate over a little nutmeg. Place the dish in the oven and bake for 2 hours until a brown skin has formed. Remove the skin and check to see if the pudding is thick. If necessary, return the pudding to the oven for 20-30 minutes more to thicken. It should be creamy but still slightly liquid when ready. 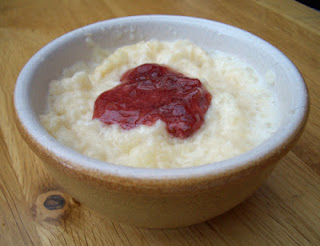 I have found that this recipe makes enough rice pudding for 3 breakfast servings. I have reduced the sugar in the recipe so that I can flavour it with sweet ingredients without making it overly sweet. In the morning, I spoon a portion (about 125g) into a small bowl, add a little extra milk and microwave for a minute, stirring half way through. Then I add something like raisins or a dollop of jam. The question then is whether to eat round the jam until the last mouthful, or stir it through the pudding before starting!

So if you are looking for an alternative breakfast then why not try something from this blog posting. Or you could try the puddings as a healthy dessert if you prefer.