Being someone who loves Milton Keynes, I was eager to get down to the MK50 Anniversary Exhibition in Middleton Hall this week to see what I could learn. It is easy to think that you know a place when you live in it but there is so much more to find out. There is history that out-dates even the oldest of residents and plans that never became reality. So even if you think you know everything there is to know about Milton Keynes, think again. 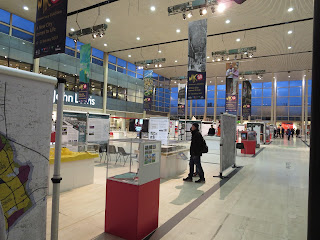 My 12 year old daughter and I carefully went from exhibit to exhibit, making sure we didn’t miss anything. She particularly liked the 3D models in display cases that showed various parts of Milton Keynes. Their toy-like quality and the creation of a 3D space you can view for all angles is probably what appealed to her. After scratching our heads trying to work out which way round the model of The Kingston Centre was, we realised that these models were made during the planning process and not all of them worked out how they were expected. This to me is fascinating and leads on to my favourite part of the exhibition which is the “What Might Have Been” display that talks about things that were planned but never built.  I can’t help thinking that tourists would be flooding to Bletchley to enjoy the Cowcommon Canyon. I would have liked further text to explain why some of these amazing ideas never become reality. 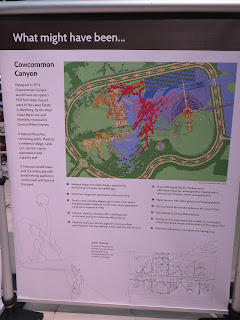 We also enjoyed the maps and boards that went back to the days before Milton Keynes was even conceived and then through the gradual building process. On one aerial photograph we could pick out the field in which our house is now built and we tried to imagine what it was like back then. Throughout the exhibition there was a real mix of the familiar with “oh I had forgotten that,” and “I never knew that.” 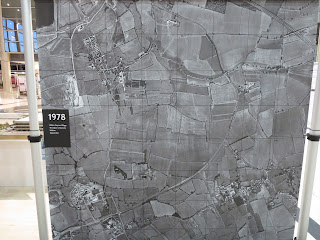 As someone who was interested in the first place, this exhibition was a great opportunity to slowly digest and ponder the various forms of information on a variety of different aspects of Milton Keynes life. My daughter was also suitably entertained by it but I can see that not every child would be quite so patient. The organisers have made an effort to make the exhibition accessible for all and to have a variety of different ways of conveying the information to appeal to different ages and types. If reading information boards is not your thing then the models in cases are interesting, as are large objects such as the driverless car or the Triceratops . Alternatively, you can sit and watch an old TV advert or similar at one of the TV screens. There are also a few hands on play areas for younger kids that include building things out of blocks that look like giant Lego or playing a large board game. Give yourself 10 minutes to half an hour to get round it depending on your level of interest and whether you are being nagged but do make the effort to go – after all there’s not going to be another 50th birthday. 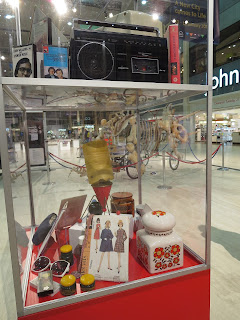 The exhibition is in Middleton Hall in the Centre:MK, is free and can be accessed during normal opening hours between now and 23rd January. 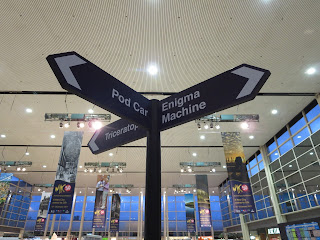