OK, there is no jam mentioned in this recipe but it is fun and Christmasy!

Christmas Puddings on Sticks - makes about 8

Plus 8-10 skewers or cake-pop sticks 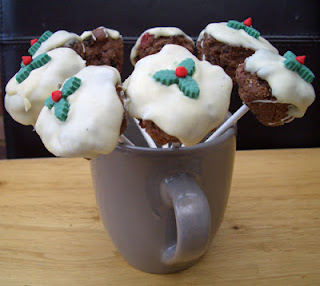 I remember years ago sitting behind my table of jams and chutneys at some Christmas fair when a rather harassed lady rushed up to my stall, glanced over the array of jars then asked, "Do you have any marmalade?" To this I replied, "Er, no, I don't grow oranges." She didn't stop on her manic Christmas shopping to think about this and no doubt continued her marmalade hunt elsewhere. However, it was a serious point. For people who make jams and preserves, it is often the "homemade" bit that is most important to them. But for me it is the "homegrown" bit that I'm most passionate about. Short of building an orangery, how could I make marmalade using Milton Keynes grown produce?

Giving this some thought and poring through recipe books, the following year I had marmalade on offer. It was my All Hallows Marmalade. Why "All Hallows"? Well, because it is made using pumpkin. Yeah, I could have called it "Orange and Pumpkin Marmalade" but how many people would buy that? There is something about the word pumpkin that just puts some people off but the marmalade itself is actually lovely. The pumpkin doesn't contribute to the flavour, which of course is dominated by the oranges that also go into the recipe, along with rather lovely warming undertones from grated root ginger. Instead, the pumpkin gives the marmalade a beautiful smooth background texture. All in all it is a tasty autumnal marmalade and the name "All Hallows" really rather suits it. But most importantly, with the use of pumpkin, I was able to offer a marmalade where a good bulk of the ingredients were homegrown.

There is no doubt that marmalade is a popular food with a definite fan club. Some people would really rather have marmalade on their breakfast toast than jam so this year I have given more attention to this preserve to expand my range. First came "Jamdelade". I invented this when presented with a rather large bag of crabapples. It is in essence, crabapple and orange jelly with pieces of peel suspended in it. Sweeter than a normal marmalade, it is the missing link between jam and marmalade and makes a good "trainee" marmalade for those who prefer sweet to bitter. Next came Lemon & Lavender Marmalade, made using the lavender that grows in my front garden. Forget soap, this marmalade taste of lemons but with a more complex flavour that is hard to pinpoint without the clues from the label. 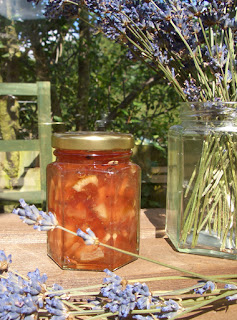 Later, Laura found a recipe for Orange and Rhubarb Marmalade in her grandmother's old recipe books. What a find that was - a very popular marmalade that sells from the name alone, but it stands up to taste testing too with it sherbetty-orange zing. Then in the autumn, with the apple harvest, I tried an Apple & Ginger Marmalade recipe. It is a joy to make as it well behaved and sets beautifully and again it is a popular choice. Finally, I adapted the Apple & Ginger Marmalade recipe to try a flavour combination suggested by Lisa on my Facebook page - Strawberry & Lime marmalade. Wow! What a revelation that was! It is made using limes, lemons, apples and strawberries and if you shoved a whole pack of Fruit Pastilles in your mouth in one go you would get a close approximation of the flavour of this marmalade. 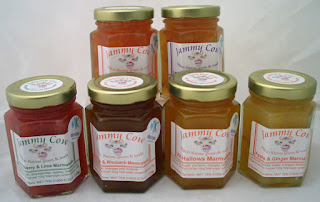 For many home-made preserve makers, there will be growing anticipation as we approach the long awaited Seville orange season early in the new year. Not so for me. Seville orange season will once again wash over me and instead I shall be making a steady stock of marmalades throughout the year as the different fruits come into season. And with such an amazing selection of flavours on offer, who would be satisfied with a jar of plain old Orange Marmalade anyway?