It has now been about 10 years that I have been struggling to joyfully feed my picky daughter. I know she is not as bad as many, for which I am grateful, but I cannot help but wish I could serve up an evening meal where what she had on her plate was the same as everyone else and that she actively enjoyed. There are the occasional wins, like a payout on a fruit machine, that make me happy. Then the next day arrives and I'm back to scratching my head and scheming.

It wasn't that long ago that I felt we were making progress when she asked to make ramen noodle soup. For this I had to boil up bones for a few hours to make a bone broth but it was worth it to see her spooning nutritional food into her mouth with enthusiasm. Now she has declared her desire to be a vegetarian. Certainly a contrast to eating bone broth but also made more challenging by the fact that she doesn't like vegetables. A (I hope) temporary stepping-stone has been the arrival of "Quorn" and "Linda MacCartney" products into my kitchen but my own food beliefs of making food from scratch from recognisable ingredients is somewhat at odds with this.

With a stubborn teenager in the house, taking the moral high-ground over animal-rights, the only way to realise my dream of us all sitting down to eat the same meal is for the rest of us to eat vegetarian meals too. This is not all that unusual, actually, as I don't have an overwhelming drive to eat meat with every meal and I'm fully aware of the evidence that less meat in our diets would do us a whole world of good. With an allotment full of free ingredients it makes perfect sense too. Only, up until now I've not made too much of a push in this direction as my picky daughter would reject a veggie meal due to the vegetable content.

A few weeks ago I was at the Stony Stratford Apple day with husband and other (non-fussy) daughter. Having inspected the various catering stalls, my daughter decided she fancied trying the food from Urban Grilla. They were serving halloumi with couscous and my daughter said she had always fancied trying halloumi. I had only tried it for the first time back in May when it was served up as a starter at the MK Food & Leisure Awards and I was sure she would like it. 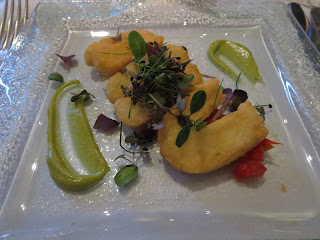 So we bought her a portion of that and I tried their chicken. Indeed, she did like it, along with the couscous and salad. It certainly was something a bit different from the usual burgers or sausages we enjoy and it made a good value, filling meal. 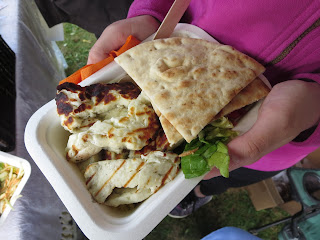 So, this week, with that meal in mind, I decided to have a go at recreating it at home. Of course, Urban Grilla barbecue their food and it is very definitely not barbecue weather at the moment but I figured a griddle pan would work well enough. Sliced and then fried on each side in a dry griddle pan for 2-3 minutes a side, halloumi is certainly easy enough to prepare.  I served it up with wraps, salad (in separarte parts for personal selection) and couscous. There were a few finely chopped stir-fried vegetables in with the couscous and I had soaked it in vegetable stock but left it relatively bland in order not to offend. 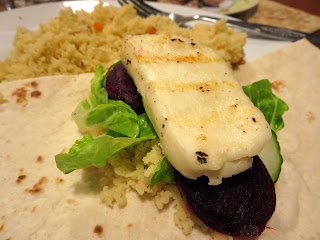 My daughter was suitably impressed when she came down for dinner, declaring the food "something I want to eat for a change." And indeed she did, refilling her plate until she was full and remaining cheerful throughout. Ah... maybe just another random fruit machine pay out... or maybe progress.
Posted by Jammy Cow at 05:46 No comments: