My girls have never been particularly keen on cereal for breakfast, preferring instead to have toast, crumpets, pancakes, waffles or brioche. I guess you could say they prefer a continental-style breakfast. So when my daughter came home from school, talking about doing a school project on French culture I explained she part way there when it came to breakfast.

In the next few days she did a bit of research into French food and we had fun cooking some French recipes for breakfast, lunch and dinner. Chicken Provencal for dinner, Croque Monsieur for lunch and pain au chocolat for breakfast. Then last Saturday morning I whipped up a plate of French Toast brioche for their breakfast, complete with a little portion of jam for dipping. I have to say it was dead simple to do, only took a few minutes to cook and went down a storm! I think this might feature regularly on the weekend breakfast menu.

Crack the egg onto a dinner plate and add a splash of milk. Whisk the egg and milk together carefully. Heat the oil in a large frying pan then dip each piece of brioche into the eggy mixture until coated on both sides and all the mixture is used. Fry the pieces of brioche on one side for a couple of minutes until golden then flip and cook the other side until golden. Remove from the pan, cut into soldiers and serve with a tablespoon of jam for dipping. 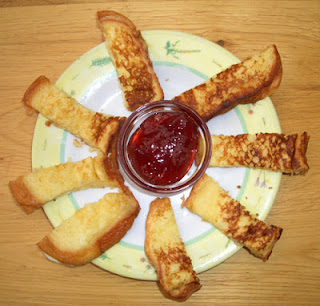 Devonshire Splits... don't mind if I do!

Ooh... I do love a decent cream tea but quite honestly I'm a bit rubbish at making scones. And a rubbish scone ruins a cream tea. I have tried... but somehow they always turn out on the dense side and hard work to wade through. No good at all.

At the weekend, my daughter was thumbing through my bread machine recipe book and oohing and ahhing at the possible things we could bake. Eventually she came across a recipe for Devonshire Splits that I had previously bookmarked.

"These look yummy, can we make these?" she asked.

But why had I bookmarked them but never made them? It usually means I didn't have one of the ingredients to hand when I last considered it. A quick scan down the page revealed a remarkably simple recipe for the splits themselves but a serving suggesting with clotted cream and jam. OBVIOUSLY it wasn't the jam that was the problem but the clotted cream.

I put the cream on my shopping list then and there then after this week's shopping trip had a go at making a batch. They are in effect just a slightly sweet bread bun but they work really well. And the combination of clotted cream with my Strawberry and Vanilla Jam is just divine! So much better than a rubbish scone any day. 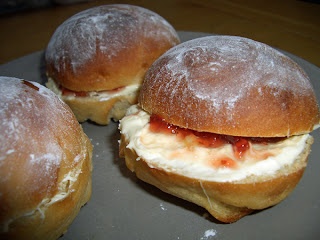 Place all the ingredients into your bread machine in the order stated in your instructions and set to dough. Once finished, remove the dough from the bread machine and knock back on a lightly floured surface. Cut the dough into 8 pieces and shape each one into a round roll. Place on a baking tray and cover with greased Clingfilm. Leave to rise for about half an hour. In the meantime, preheat the oven to 220°C, gas 7. Bake the buns for about 15 minutes until golden. Place on a wire rack to cool completely. To serve, cut in half and fill with clotted cream and jam and sprinkle icing sugar on top.
Posted by Jammy Cow at 14:18 No comments: