My life has been somewhat apple-themed of late. Since Mr Fitz asked me to make Apple Sauce for his hog roast at the MK Food Fest, I have been surrounded by bags of apples. I have made several batches of Apple Sauce, Apple Ketchup and Brown Sauce for Mr Fitz and I have made various apple jams too - Apple & Ginger Jam, Apple & Ginger Marmalade, Toffee Apple Jam, Orchard Fruit Jam, Apple & Cider Mincemeat and Spiced Apple Curd. This is partially driven by the need to make use of the apples before they spoil and partially because October is Apple Day season and it is nice to have some apple preserves on sale for those. Last weekend I was at the Stony Stratford Apple Day and next weekend I shall be on hand to provide information about foraging at the Great Linford Apple Day. 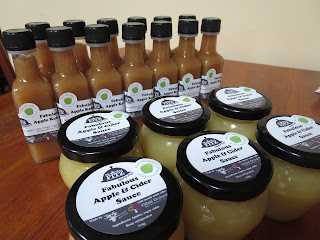 The Stony Stratford Apple Day was a lovely day out. I have been attending this event since it started about 5 years ago and I think this year's was the best yet. My daughter always enjoys entering the cooking competition. A few years ago she got third prize for her apple crumble, last year she entered her apple charlotte and this year the competition was for apple cake. A week beforehand she selected a recipe for Dorset Apple Cake and tested it out on the family. It didn't cook according to plan and we had to leave it in the oven for much longer than it suggested but it had a lovely crunchy topping and a lovely flavour. Happy with this, she made it again for the Apple Day.

In the meantime, the idea of creating an apple cake had been ticking away at the back of my brain. I wasn't really thinking I would enter the competition too as I had enough to be doing anyway in preparation for the day but then the idea struck me that I could make an apple-shaped cake using the hemisphere tins my mum had bought me for my birthday a few years ago. You may remember that I once used these tins to create an elephant cake for my daughter's birthday. That had been a banana and maple cake inside so I began to wonder if I could make the same basic recipe but substituting mashed bananas with cooked apple. But, then, of course, there had been the pumpkin cake I had made for Halloween last year. This cake had been a Lakeland pumpkin cake recipe. So.... maybe I could make that but swap the grated pumpkin for grated apples... 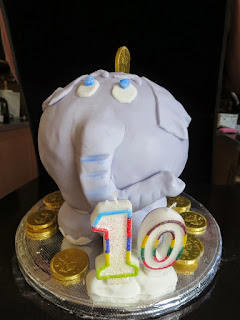 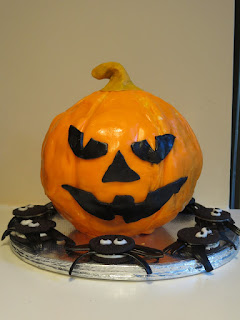 That seemed the most likely option so on the Saturday before the apple day, whilst my daughter busied herself with her Dorset Apple Cake, I set about making my apple cake, grating 6 Bramley apples into the batter instead of pumpkin. Once cooled, I sandwiched the two hemispheres together using some freshly made Spiced Apple Curd. Next I cut a little divot out of the top, drizzled over some more of the Spiced Apple Curd and stuck in a cinnamon stick to resemble the stalk. 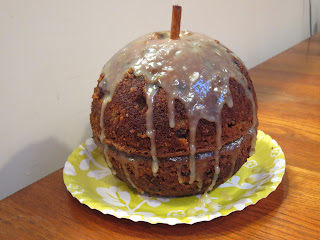 The next day my daughter and I proudly took our cakes over to the judging tent, where a fantastic selection of other cakes were already on display. Then later that afternoon the winners were announced. My daughter got herself a "Highly Commended", although the critic that came with the certificate said it had a soggy bottom. Alas this proved to be true - such is the problem with cooking cakes with chunks of apple in. Sadly, I didn't get a place and my critic said that there wasn't enough apple in it. Ho hum. Taking home the remains, I have to say that I thought it tasted fantastic and my daughter said it was like some sort of amazing birthday cake.

Preheat oven to 160°C/gas 3 and grease 2 medium hemisphere tins. Sift the flour into a bowl and add caster sugar, raising agents, salt and spices. In a measuring jug, mix together the oil, light brown sugar and eggs. Add this mix to the dry ingredients, add the grated apple and sultanas and stir together until combined. Divide to batter between the two tins and make for 1 hour 20 minutes until golden brown. Test with a skewer. Leave to cool in the tins. Once cool, sandwich together with spiced apple curd, jam or butter icing.

The idea of the banana and maple cake still nagged at the back of my mind too and I was curious to know if it would work. So, later in the week I made a batch of what should have been banana and maple muffins but I substituted the mashed banana for an equivalent quantity of my Apple Sauce. Oh my! These proved to be a winner, making golden muffins with a beautiful light texture. The Apple Day judges wouldn't have liked them as they didn't taste at all appley but that in itself has its advantages when looking to create a beautifully light plain cake in the future. Definitely one to remember. 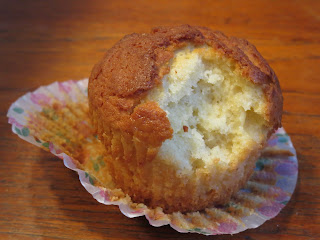 Preheat oven to 190°C, gas 5 and put paper cases in a 12 hole muffin tin. Cream together the butter and sugar then add the eggs (one at a time). Stir in the syrup and then add the apple sauce. Add the flour and baking powder and stir until just combined. Spoon the batter into the muffin cases and bake for 15-20 minutes until golden brown. Test with a skewer. Cool on a wire rack.

Every Sunday I insist that we sit down to a roast dinner. I know this is a dying tradition but it is one I am keen to hold on to and I do particularly enjoy crispy roast potatoes, seasonal vegetables, slices of roast meat and lashings of gravy. My personal favourite roast meat is lamb, my husband loves pork - particularly if the crackling has crackled properly, and my daughters love chicken.

On 18th September we went out for dinner to celebrate my parents' 45th wedding anniversary - no mean feat! They suggested the Harvester closest to their home and we went early enough to catch the last servings from the carvery. I was glad of this as Sunday without roast dinner just isn't right! Their meats of choice that night were turkey and beef. I wouldn't normally bother with turkey at home as both chicken and duck have more flavour in my opinion and we have a goose at Christmas (another tradition I'm keen to keep alive). I love the flavour of roast beef but when doing it at home it can be as tough as an old boot. Trying to cook a small bit of beef without making it tough is tricky and often results in disappointment. So on this occasion I enjoyed the novelty of turkey and beef and stacked my plate high with roast potatoes, vegetables and impressive Yorkshire puddings.

Last week whilst out shopping I found myself drawn to the beef roasting joints now that my appetite had been refreshed with the taste. I found a bit on offer but it was only about a kilogram - enough to feed the family but difficult to cook. So I asked my friend Turan from Coldsmoking Cookery School how he would cook it for best results. He suggested brining it first then slow cooking it covered for a few hours. This, he told me, would make it fall apart with the touch of a fork. This wasn't entirely what I was after as I was more looking for nice slices than "pulled brisket". So he amended his instructions to brining then cooking covered at 180°C for about an hour, then taking off the foil for the last bit and ramping the temperature up to brown.

Turan's instructions for brining couldn't have been simpler. I found a suitably small plastic container and put it on my scales and zeroed them. Then I added the meat and filled the container so that the meat was covered. Together the meat and water weighed 1500g, so I needed to add 15g of salt to create a 10% solution. I put the lid on the box and put it in the fridge for 24 hours. To cook, I placed it on a rack in a roasting tin and covered with foil then cooked at 180°C for 1 hour. Then I removed the foil and turned up the oven temperature to 200°C. I had been making some Garlic & Ale Mustard for my mate Mr Fitz earlier in the day and I had a little bit of that left over so I coated the meat with it and put it back in the oven for another twenty minutes before finally bringing it out to rest. 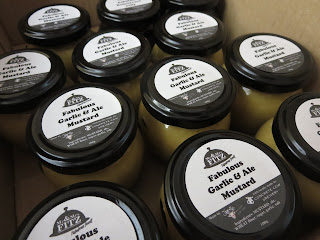 I'm pleased to say that the combination of brining and cooking left me with a piece of meat the sliced beautifully and was both tasty and tender to eat. I do believe that roast beef may be back on my Sunday menu from now on. 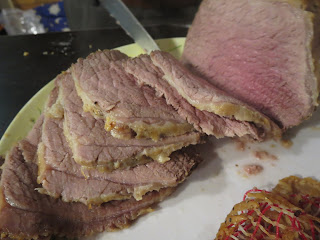 My allotment neighbour James has an amazing talent for growing marrows. This is not something he particularly works at. Indeed, he is merely trying to grow a few courgettes. I did suggest he should find himself a champion marrow contest to enter but he didn't seem impressed. He was on the verge of throwing away what he considered to be inedible courgettes (but what I could see were beautiful marrows) when I said I could make use of them if he didn't want them. This started a weekly delivery of a crate of marrows. Although overwhelming for some, I know I can make use of the marrows in chutneys as well as in every day cooking and baking. They are lovely in small amounts, chopped up and added to casseroles, stirfries and any number of savoury dishes. They also work well grated into cakes. Indeed, on one marrow delivery, I asked James if he fancied trying my chocolate courgette muffin recipe, which he was enthusiastic about. In fact, since then I've not had another marrow from him! 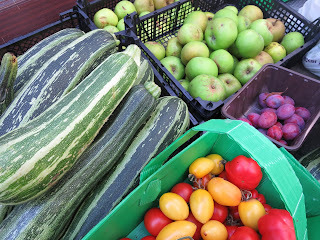 Anyway, I'm now in the process of working my way through a lovely pile of marrows. I guess we get through 1 or 2 marrows in everyday cooking during an average week. They are particularly good at bulking out mushroom recipes, with onions and garlic added too.

There I was thinking that I would make some chocolate courgette muffins myself when I spotted two bananas in the fruit bowl looking too far gone to survive a trip to school in a lunchbox. Two bananas are a little tricky as most banana bread recipes call for 3 but I thought, like the mushrooms, they could perhaps be bulked out with a bit of marrow. And so Banana & Marrow Cake was born.

Preheat oven to 180°C, gas 4 and grease a 23cm deep square cake tin and line the bottom with baking parchment. Put the flour and baking powder into a large bowl and combine. Stir in the sugar. Add the sultanas. Grate in the marrow and add the mashed banana but don't stir. Beat the eggs into the oil then add this to the bowl. Stir together until combined. Pour into the prepared cake tin and bake for 1 hour, testing with a skewer. Cool in the tin for 10 minutes or so then turn out onto a wire rack to cool completely. 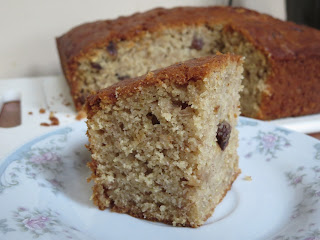