When I got back from holiday the plums on my Victoria plum tree were falling off the tree, they were so ripe. Now there is a rush against time to process them as quickly as possible to preserve them before it is too late.

One of the quickest recipes I know for using plums is Plum and Orange Mincemeat. It is a slightly odd thing, to make a Christmas recipe in August but now is when the plums are ripe and by Christmas the mincemeat will be nicely matured. So last night I carefully chopped up 3lb of plums and mixed it together with the oranges, dried fruit, sugar, spices and brandy.

This morning I had the rather pleasant task of boiling this delightful mixture up for half and hour to meld the ingredients together into a beautiful mincemeat. Doing so filled the house with gorgeous smells, with a hint of Christmas that wasn't so out of place on a rather dismal August day. Even the girls in the living room were led into the kitchen by their noses, asking, "What are you cooking, Mummy, it smells lovely?"

The only problem with this was the anticipation it building in your body - an expectation to eat something yummy. But alas, the concoction was to be sealed into jars with no more than the final lick of the spoon before the washing up.

Preheat oven to 180°C. gas 4 and line a 2lb loaf tin. In a large bowl, cream together the butter and sugar then stir in the eggs. Grate the zest off the orange and add this to the bowl. Squeeze out the juice. Set aside 2 tablespoons of orange juice for the drizzle and put the remaining juice into the bowl. Sift in the flour and spice then stir until well combined. Finely chop up 4 of the plums and add this and the sultanas to the cake mixture and fold in. Dollop the mixture into the loaf tin and bake for 1 hour until a skewer inserted comes out clean. Leave to cool completely in the tin. Destone the remaining plum then place it in a blender with the reserved orange juice and blend until smooth. Add the icing sugar and stir. Prick the cake all over with the skewer then pour over the drizzle. Enjoy. 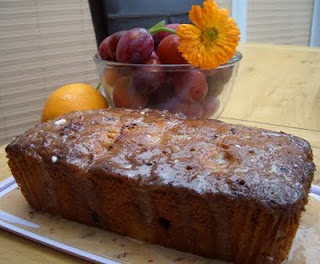 Jammy Cow was slotted between a stall selling cured Continental meats and the local butchers, Woburn Country food. So for two and half days we were teased with the smells of chirozo and freshly cooked sausage samples. Any member of the public wandering through the tent could have foregone lunch after sampling one of everything on offer to taste. A delight of local and exotic flavours.

I often think a weekend inside a marquee at an event like this is like being on the set of a murder mystery drama such as Miss Marple or Midsomer Murders. Thankfully there were no murders but there were definitely the usual mix of eccentric characters and stereotypical gentry. It is all so quintessentially English.

Friday was a warm, dry afternoon but fairly quiet on the custom side of things. Most customers were women of a certain age and retired men. It was a pleasant afternoon, although I had expected to be supplied with a chair as well as a table. I spent most of the afternoon stood up and occasionally sat on the grass behind the stall, resting my aching back. Towards the end of the afternoon my companion Clare went for a walk round the stalls and stopped to chat with the people at the Corkers crisps stall. These are handmade crisps, which easily rival the likes of Kettle or Tyrrells. To my surprise, a moment later the man from Corkers came walking towards our stall with a high stool in his arms. This he gave to me to borrow for the weekend. What a hero! From then on I spent a good many hours perched on that stool, resting my legs and back! 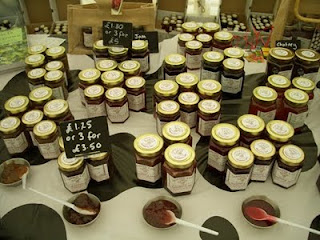 Before leaving on Friday evening, Clare pointed out that the cardboard boxes that housed the extra Jammy Cow stock were getting damp on the ground. For this, we slipped a couple of plastic box lids underneath them and stacked them on top of each other to get as many of them off the ground as possible. This proved to be a particularly fortuitous bit of forethought when the next morning I arrived at the marquee in torrential rain. A few moments after arrival a small trickle of water began flowing in under the edge of the marquee and gradually flowed down the length of the marquee behind every stall on that side of the tent. Then within the next few minutes the trickle turned into a small stream and quickly my canvas boots yielded to the water, soaking my socks. I retreated to the highest piece of ground I could find behind my stall and stood there on the boggy hillock wondering what to do. 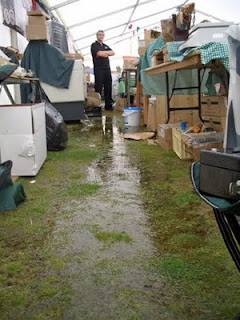 As the flow of water became steadily worse a kind of Dunkirk spirit set in amongst the stallholders. Helen from Woburn Country Food lent me 3 large plastic crates to get my stock off the ground, the man at the Indian sauce stall improvised wellies out of two plastic bags and the groundsmen from the Abbey site came in with bags of sand and sheets of hessian to raise the ground level for the worse effected stalls. None of this, of course, stopped us from continuing regardless. Eric merely straddled the steam passing his stall and continued to carve sarroso off the bone and I perched on my borrowed stool, soggy feet resting above the floodwater. What amazed me was that some people actually came out anyway to shop that day. 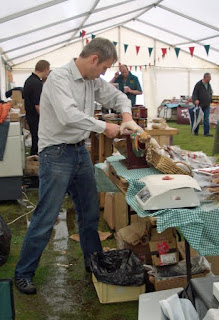 Sunday was the best day. The weather had calmed down, apart from a playful wind that occasionally tried to whip my cow-print tablecloth away. And the customers were out in force. A busy day, with the stallholders behaving like automatoms in a theme-park ride. Motion-sensitive, as a potential customer walked past we would switch on and play our pre-programmed line:

Then at the end of Sunday it was time to pack it all up and say our goodbyes. I returned the stool and the plastic crates, exchanged business cards and spent a little less money than I took! Hard work, tiring but successful. Many more people aware of the Jammy Cow name, lots of people with Jammy Cow preserves to take away, a few empty boxes for me to take home and pleasant weekend spent in the company of people as passionate about good quality food as I am.
Posted by Jammy Cow at 03:47 1 comment: