As you know, I am all in favour of eating with the seasons and wish that supermarket stocks would reflect the seasons more than they do. Having said that, there is one food item that disappears from the supermarket shelves for several months of the year that I wish would be available all year round. That food is prawn toast. It first appears in January, in time for the Chinese new year and stays on the shelves until the barbecue season, when it disappears to make way for barbecue meat. Then Christmas fare replaces the barbecue foods, preventing the prawn toast from reappearing until January.

As you may have realised, I like prawn toast and it makes a nice little addition to our home cooked Chinese meal that we have probably about once a fortnight. It is therefore a little annoying not to be able to buy it all the time. So, the other day when I was thinking that I really fancied a couple of triangles of it, I wondered how hard could it be to make my own. To be honest, I didn't have much of a clue as to what might go into it, other than bread, prawns and sesame seeds. Still, a short internet search soon gave me some ideas and various recipes. Most of them used 8 slices of bread, making a whopping 32 triangles... I only wanted 8!

So, I jotted down a few ideas for ingredients, quartering what had been suggested and then went off into the kitchen to give it a go. It is at times like this that it is really handy to have homegrown garlic and shallots available because they come in all sorts of different sizes and I just needed one tiny shallot and one tiny garlic clove for my scaled down recipe. The other consideration was that, when cooking a stirfry, the last few minutes of the meal preparations can become a bit hectic when you feel as if you need about 4 arms as everything is on the go at once. So, ideally, I wanted to just pop my prawn toast into the oven to reheat - like the frozen ones I usually buy - rather than having to create them in addition to everything else I would be doing. I decided, therefore, to make them in advance, leave them to cool and just pop them back into the oven to reheat before serving. I figured too that this would probably give them the nice crisp texture that I like.

The recipe was surprisingly straightforward to make - really just an exotic fried bread. They reheated perfectly too and, as for the flavour, let's just say I won't be bothering with the shop bought ones anymore! 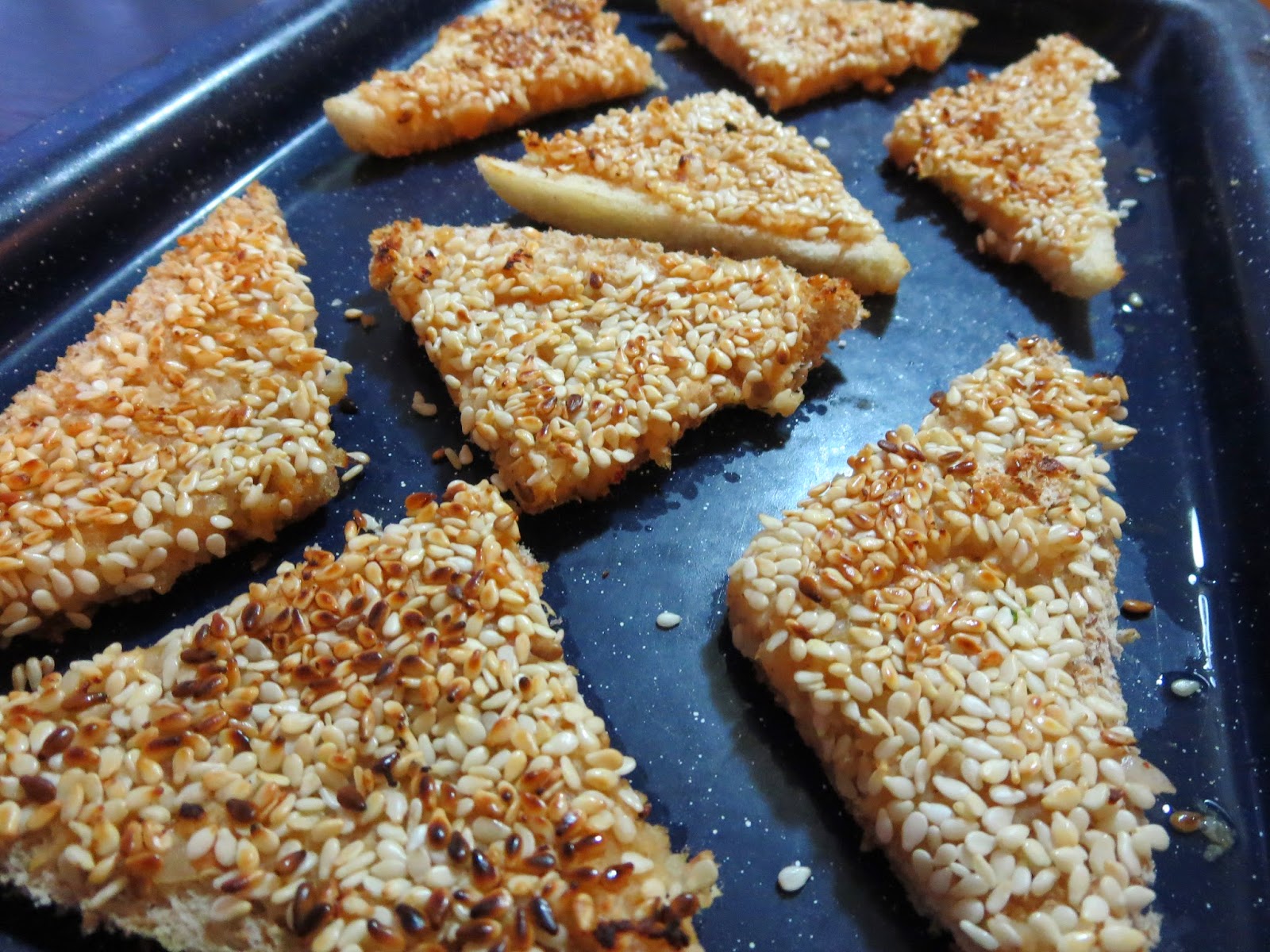 Put the prawns and other ingredients (except for the bread and sesame seeds) into a blender and blend briefly until a slightly lumpy paste forms. Cut the crusts off the bread then spread the paste over the 2 slices. Heavily sprinkle over the sesame seeds and press down lightly. Cut each slice of bread into 4 triangles. Heat some oil in a frying pan and shallow fry the bread for about 2-3 minutes on each side then set aside on a baking tray (or serve at this point). Reheat in an oven at 180C, gas 4 for 5 minutes then serve hot with a Chinese-style meal. 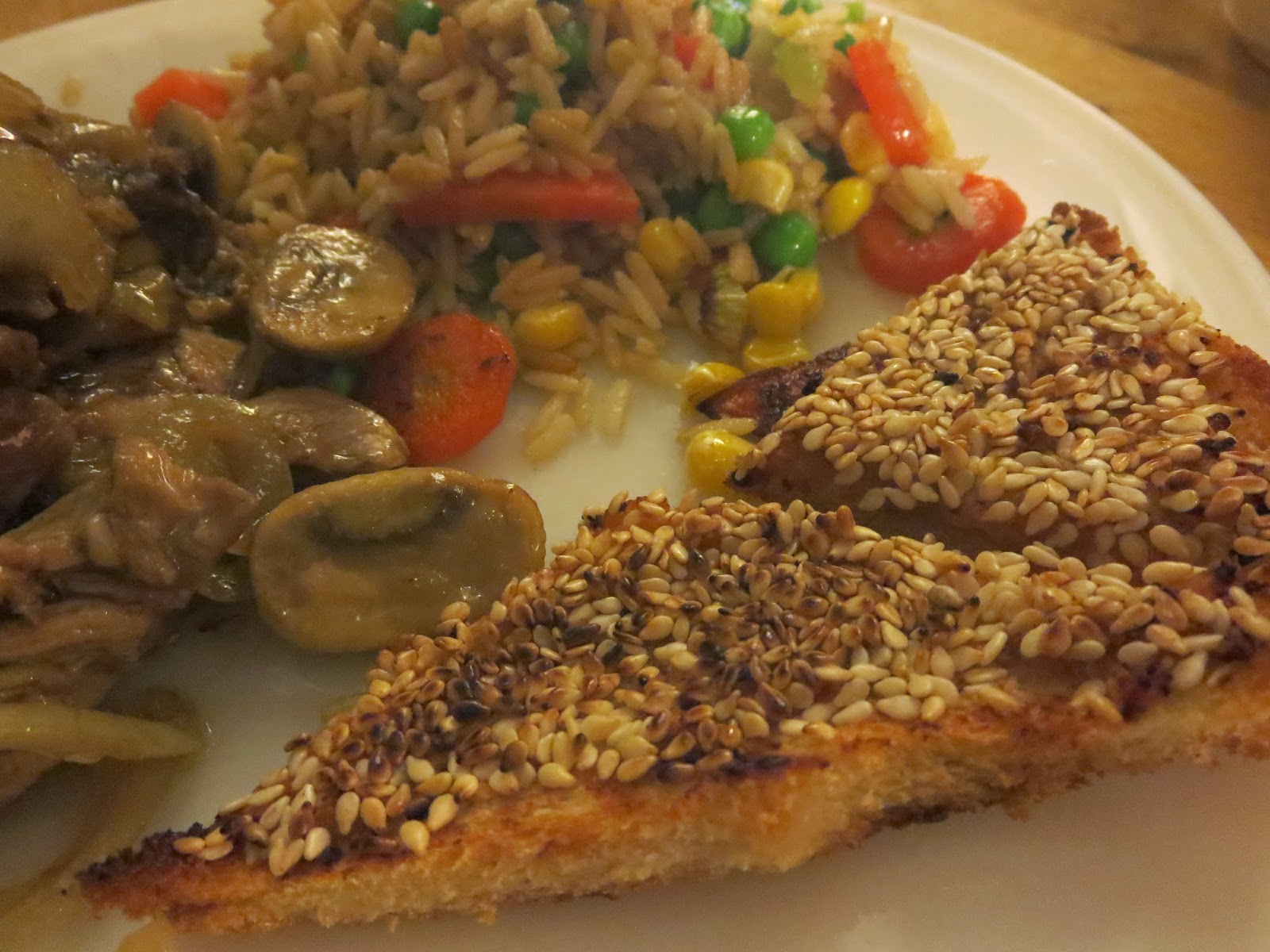 We have had a bumper crop of tomatoes this year. I usually sow lots of tomato seeds which readily grow into numerous tomato plants. However, sometime in August blight usually strikes and that is the end of that. A good excuse to make green tomato chutney but a bit of a shame in terms of getting lovely ripe red ones. When you realise that blight flourishes when the temperature doesn't drop below 10°C and the humidity is high, it is hardly surprising it usually arrives in August, along with the thunderstorms. However, this year, August was cool and September was the driest on record and so blight has had pretty much no impact on my tomato harvest. So, all the tomato plants have cropped nicely... abundantly actually! 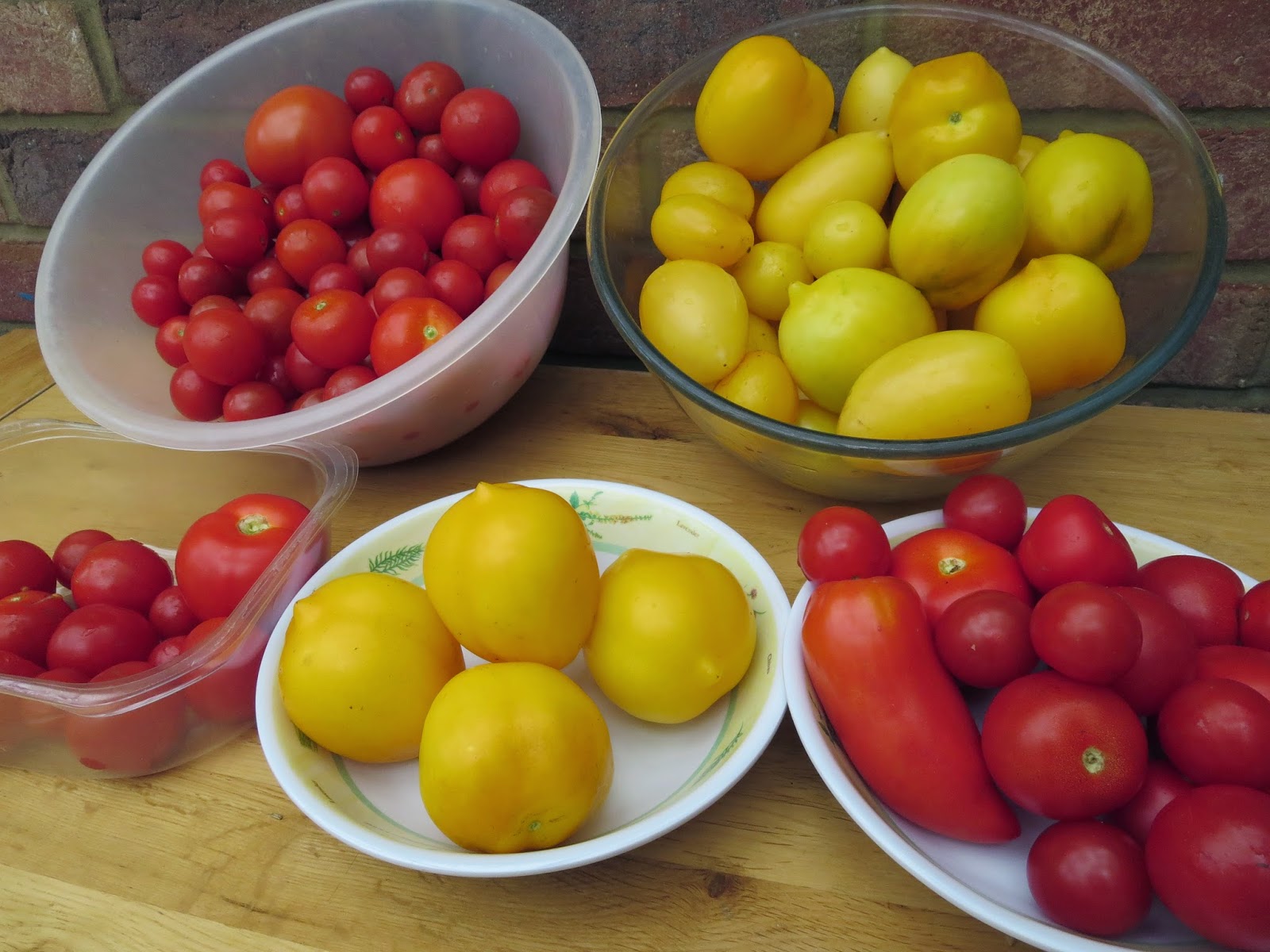 I have made several batches of various tomato chutneys so far and have also shoved some tomatoes in the freezer and generated 24 pints of puree! Now I have harvested all the tomatoes, ahead of any frosts likely to arrive in October. I have strung the trusses up in the greenhouse to continue to ripen. , However, I'm in no hurry for more ripe tomatoes right now as my freezers are groaning under the weight of the tomatoes already in them.

So, when my new food dehydrator was delivered this week I wondered if dried tomatoes would be a nice thing to create. Would make a change from chutney or puree, I thought. I sliced one large tomato thinly, arranged the slices on a rack of the dehydrator and seasoned them with "pizza and pasta seasoning" then set the dehydrator off for hours for the magic to work. 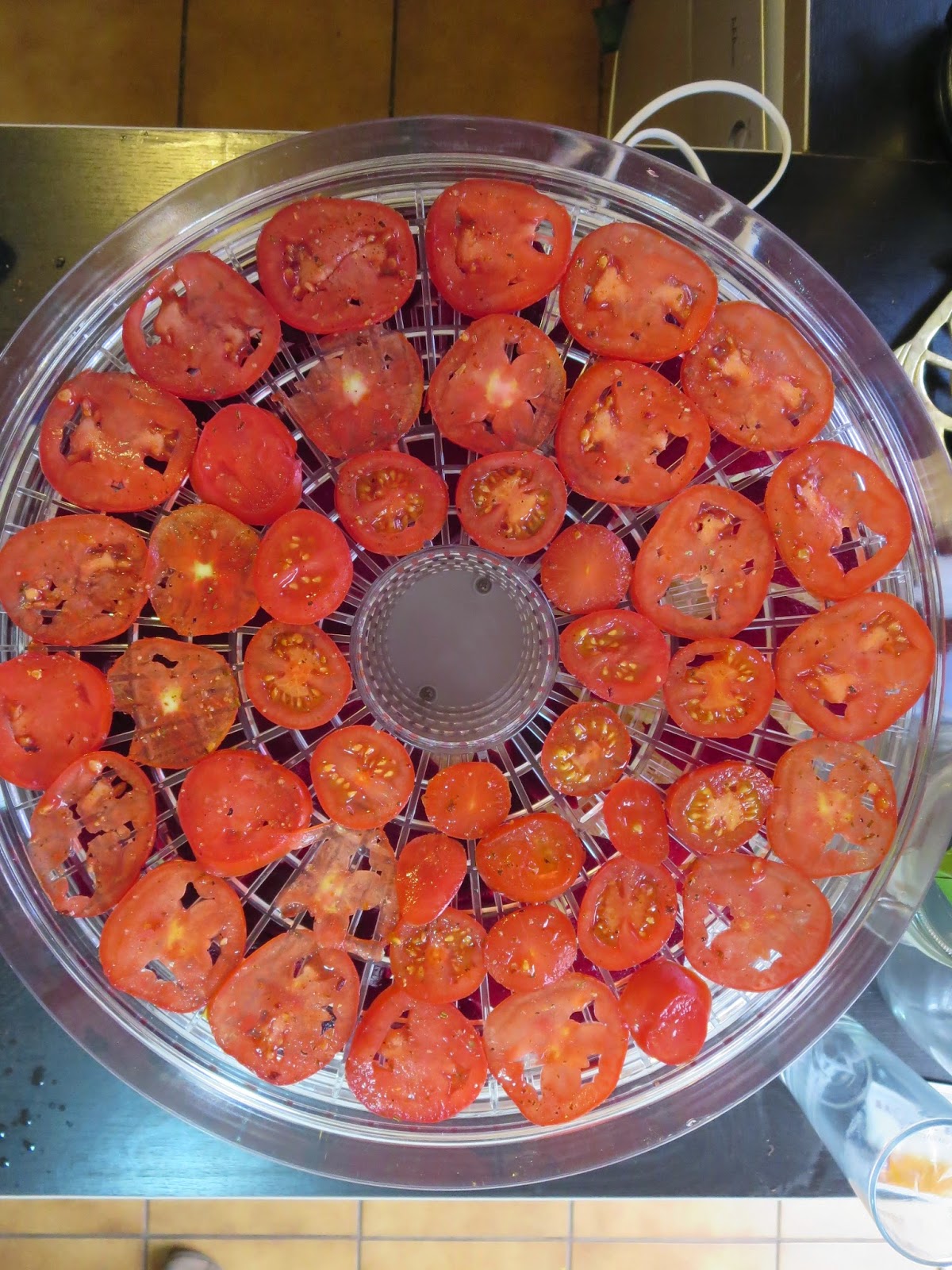 Wow! What a taste sensation - bursts of flavour in the mouth, several of them, in turn, and all intense.

So, having created these wonders of flavour, what could I do with them?

The next morning I set off a batch of focaccia dough in the bread machine, chopped up the dried tomatoes with some scissors and threw that in whilst it was kneading. A couple of hours later we were tucking in to some amazingly tasty, freshly baked bread, which, honestly, you could not have bought in a shop or gourmet restaurant. 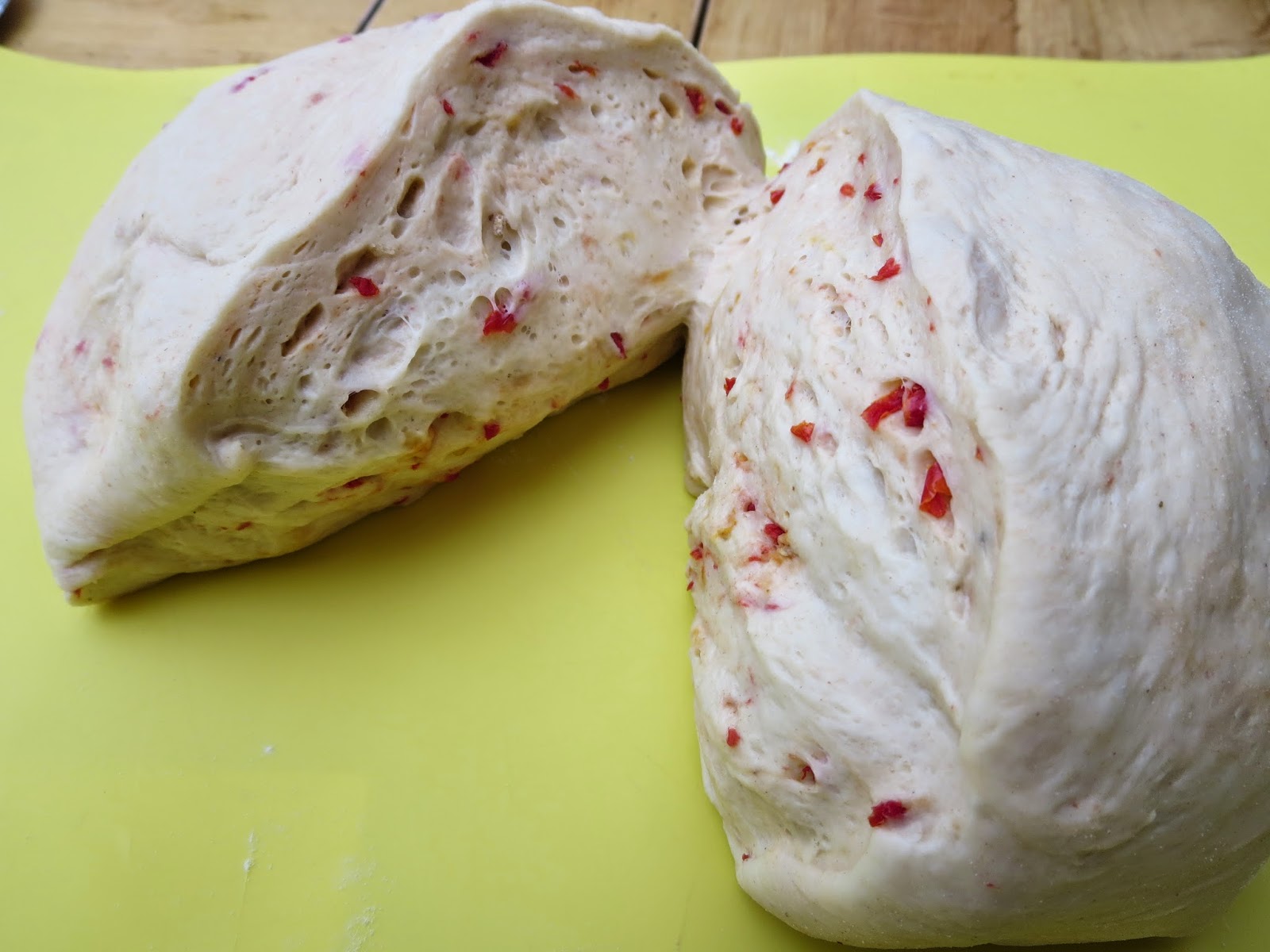 With new found enthusiasm, I sliced up 10 of the largest ripe tomatoes from the greenhouse and restacked the dehydrator. Mmm... looking forward to lots of yummy bread now! 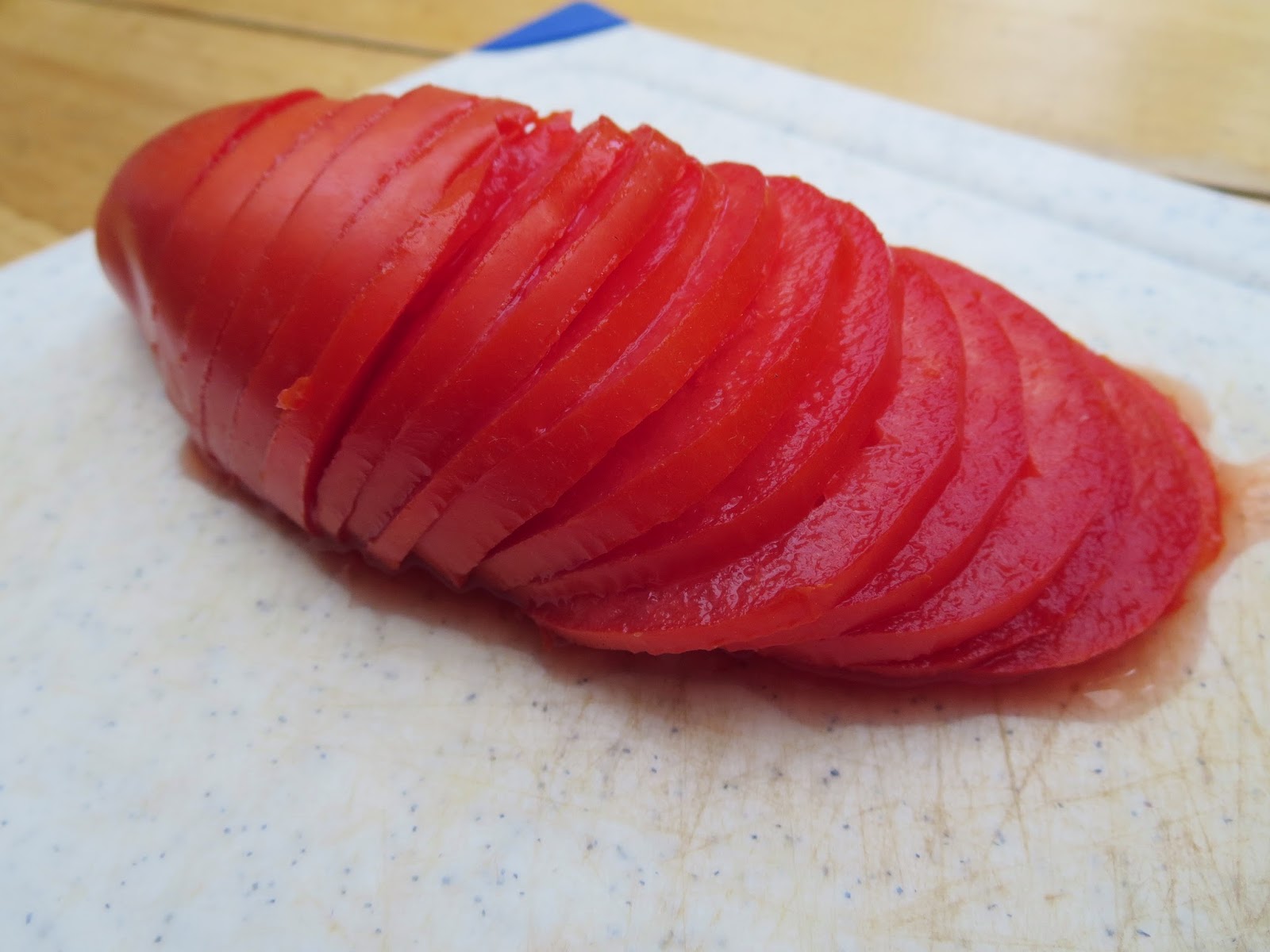 Put the water and oil into the bread machine pan then add the flour, salt, sugar and yeast and set the machine to dough. After 10 minutes of kneading, add the dried tomato pieces to the machine. Once the dough is ready, take out the dough and knock it back and divide it equally into 8 pieces. Roll into a ball then flatten each piece and place on a greased baking tray. Cover with oiled clingfilm and leave for half an hour. Preheat oven to 200°C/gas 6. Poke the surface of each piece of bread with the end of a wooden spoon to indent all over. Drizzle over a little olive oil and sprinkle with coarse sea salt. Bake for 20-25 minutes until golden and serve hot or cold. 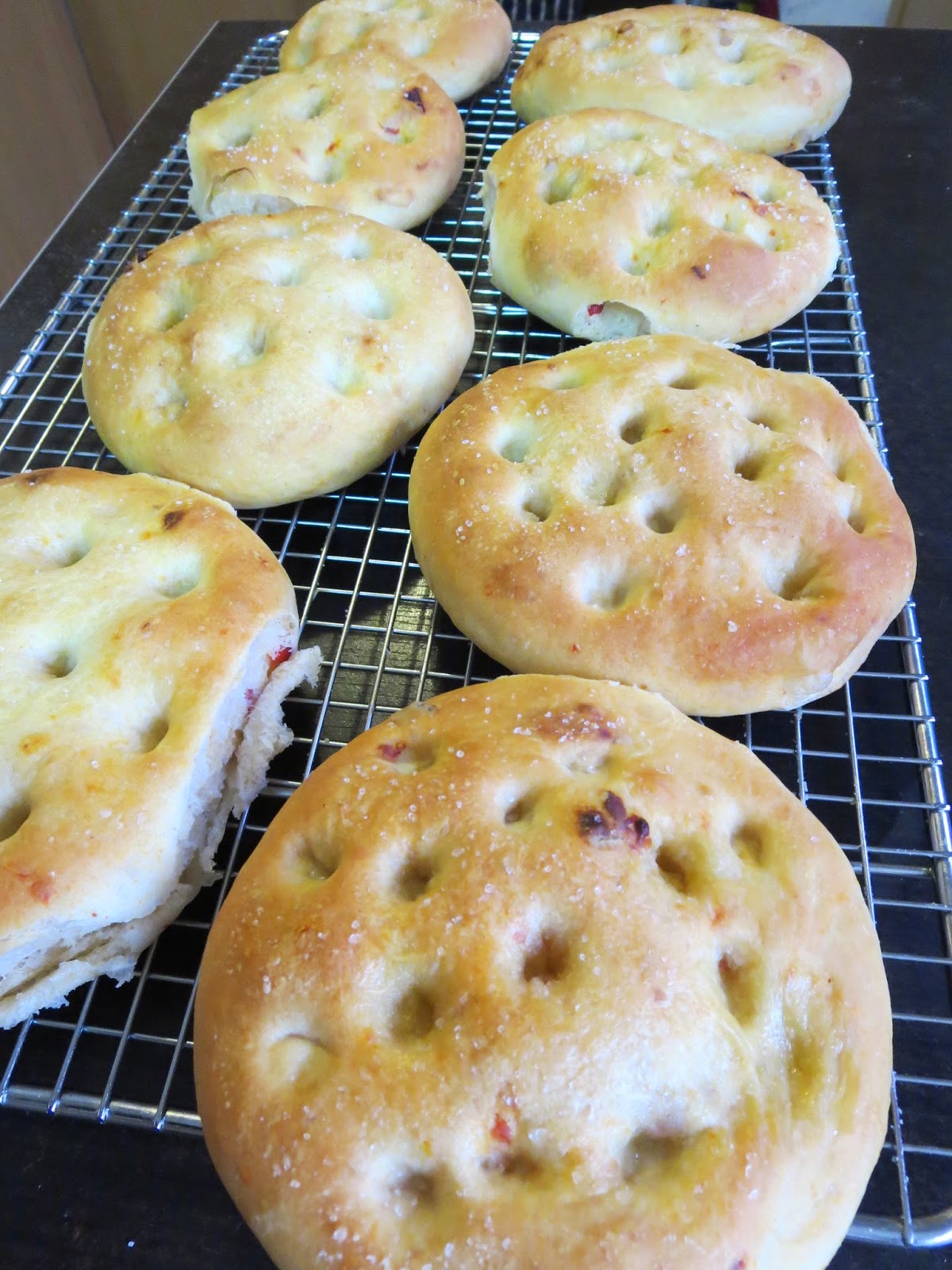 We ate these hot the first day but had some left over so the next day I placed them under the grill with some grated cheese on and had them as a very tasty cheese on toast.
Posted by Jammy Cow at 15:20 No comments: