January is very often the time of year when people take a good long hard look at their eating habits and see what can be done to improve them.

I am no exception to this but I don't restrict my thinking to January. Improving your diet in any kind of sustainable way is only achievable if it isn't extreme and completely different to your normal habits. As such, I find that a gradual process of careful honing works best for me, where I consider very gradual changes over months and months. As such, at the time I barely notice the change but if I were to compare what I eat now with what I was eating five years ago there would be a noticeable difference - it is a process of evolution.

The common thread to my dietary changes has been a move away from processed food. There are lots of arguments about what the perfect diet looks like, whether it be low fat or low sugar, vegan or paleo. However, I think it would be hard to argue anything other than a move away from processed food is a move in the right direction. I really don't want emulsifiers, artificial sweeteners and weird gums in my body whether they are also coupled with excess sugar, fat and/or salt.

So over the last few years I have progressively moved away from ready-made foods so that I find myself day in a position of making my own cakes/biscuits, jam/chutney, bread, granola and yoghurt, and all dinners are cooked from scratch too... sometimes starting by nipping over to the allotment to pick the ingredients. It is both idyllic and demanding and at each stage I didn't think I would have time to add anything more to my life but here we are, a step at a time. And once you have made that step it is difficult to go back. As hard as it was to attempt to make all our bread, I now cannot stand the smell of a sliced white from the supermarket so if I want bread (which I do!) then I have to make it. 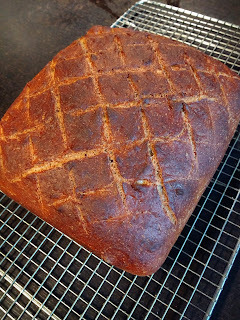 One of the easier steps was yoghurt making. Some companies would have it that it is complicated and that you need specialist equipment and sterile conditions and that you might kill yourself if you do it wrong. Well, you don't and you won't. I started with a flask. These days I own an Instant Pot - a multiply purpose cooking device that can pressure cook, slow cook, make soup and take the dog out for a walk. I'm not sure about that last one as we don't have a dog so I haven't tested it. Anyway, with it already taking up work surface and being in use often, it would be stupid of me not to have moved away from the basic flask and use the Instant Pot yoghurt making function.

The easiest way to make yoghurt is to start with UHT milk because it has already been treated to kill off any unwanted bacteria so there is no need to boil the milk first (as you would if it were fresh milk). Then add to it some yoghurt (stuff you have bought or some leftover from your last batch). I use about 50-60g of yoghurt per litre of UHT whole milk. Don't faff around with semi-skimmed or skimmed milk - whole milk is best. If you eat a satisfying portion of full-fat yoghurt you will feel sated and won't go craving biscuits in half an hour so overall you will be better off! Mix the yoghurt into the milk then heat it gently to around 40°C and keep it there (if you can) for about 8-10 hours.

The main function of yoghurt making kits is to provide the temperature control. However, I did achieve good results from using a thermos flask and sticking it in the airing cupboard over night.

Once you have made your yoghurt, you can thicken it up by straining it, if you wish. I do this by putting a nylon sieve over a bowl and lining it with a piece of muslim (I usually scold this with boiling water first as it helps the liquid to flow through). Then fill the sieve up with yoghurt and leave it to drip for a couple of hours. You are then left with lovely think Greek-style yoghurt (without any added thickeners necessary) and some liquid in the bowl. The liquid is whey and it is a very useful ingredient. 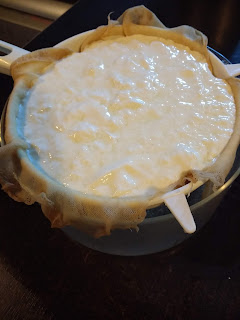 Whey is bio-active in the same way that yoghurt is so it is worth eating it for the friendly bacteria it offers. It is also high in protein so can improve the nutritional content of foods you add it to. It is also slightly acidic so reacts really well with bicarbonate of soda to make baked good rise. Wherever you see buttermilk mentioned in a recipe, you can substitute in whey. I use whey a lot so I will post more recipes on this in the future.

You can, of course, eat yoghurt plain or use it in recipes. My favourite way is to stir in some jam or lemon curd. 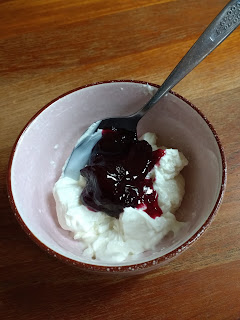 I think raspberry jam mixed into yoghurt in my favourite. It is simple and has a lovely pure flavour and a satisfying creamy, filling consistency. And so it should when you consider the ingredients - raspberries, sugar, full fat milk and cultures.

I know which one I would rather eat and it reminds me why I put the effort in but even without the label to put me off, homemade just tastes so much better! 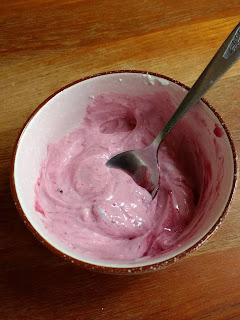