One of the things I find frustrating when I flick through preserving recipe books is when a recipe requires ingredients that are not available at the same time when growing your own. Blackcurrant and apple may be a classic combination but I do not have apples ready when the blackcurrants are out. I saw a recipe the other day for a jam using rhubarb and apple. Fail! There are about 4 months between these two ingredients (at least in my world!).  Fortunately, with the use of the freezer it is possible for me to freeze some blackcurrants to use when the apples are ready and so I do make Blackcurrant & Apple Jam.

Another classic and delicious combination that requires the intervention of the freezer is gooseberry and elderflower. These two seem to miss each other by a matter of days, with the elderflowers finishing by the end of May or early June and the gooseberries ripening sometime from mid June to July. So rather than risking missing that special moment when both are available (although arguably not at their best), I pick the elderflowers in May and freeze them until the gooseberries are good and plump. Having said that, with the late spring this year the elderflowers have only appeared since the arrival of the warmer weather in June. And the gooseberries are already forming so maybe, just maybe, this will be the year when the two occur at the same time!

I don't grow elderflowers myself but they feature frequently in the hedgerows and municipal planting of Milton Keynes. We pass many bushes on the school run each morning in fact. Once you have your eye in you'll spot them all over the place. Although it may not be your eyes that notice them first, as the heavy scent is often so strong that your nose lets you know too.

There are other whitish cream blossom flowers out at the same time so if you do decide to collect elderflowers please make sure you know what you are doing. The result really won't be the same if you collect the wrong flowers and I guess there is a possibility you may poison yourself! Below is a photo of a blossom that isn't elderflower. 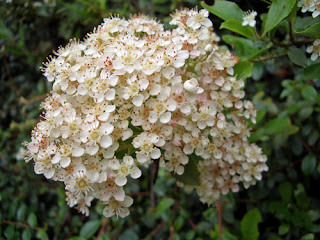 Elderflowers grow on shrub or tree sized plants and have an umbrella shaped blossom made up of numerous tiny cream flowers. The leaves are typical leaf shaped, fairly large and grow in collections of 5 or 7 leaves on one stem. If you think you have found the elderflower then smell it. It should have a lovely strong sweet perfume. If it has no perfume or stinks like sweaty donkeys then forget it! Below is a photo of what you are looking for. 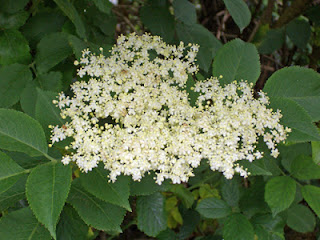 Most recipes call for 20 large flower heads so aim to collect at least that many. They can be snapped off with sharp fingernails or snipped off with scissors. Back home, give them a good shake to remove any bugs. You may also wish to wash them. I always use my elderflowers in recipes as a flavouring so they usually get strained out of the finished product. This means there is no need to fiddle around with snipping each flower from the head. They can be used fresh or frozen. If freezing them, pack them into freezer bags, squash out as much air as possible and seal then pop them into the freezer until needed. They will probably go brown on thawing but they will retain their flavour and this is the key thing. They can be used from frozen to flavour jams and desserts as well as to make things such as elderflower cordial.

Elderflower cordial makes a lovely summer drink and is a nice non-alcoholic drink to serve at garden parties and barbeques. At this time of year, I make up a 2 litre bottle with elderflower cordial and a mixture of chilled still and sparkling water to make a slightly sparkling non-alcoholic drink to take to an event instead of a bottle of wine. It goes down well and is suitable for all. A couple of weeks ago a boy about 12 years old decided to give my sparkling elderflower drink ago and liked it so he came up to me and asked what elderflower were. Not only was it a flavour he'd not tried before but he didn't even realise that the flowers themselves were growing in the street in which he lived.

Usually at this point in June you would have missed the best of the elderflowers but they are just coming into their prime so make the most of it and make some elderflower cordial.  It is dead easy and tastes delicious. As well as diluting it to make a drink you can use it to flavour other things such as butter icing for fairy cakes, yoghurt or panna cotta. Whatever you decide, if you want to use elderflowers then get out there and pick some now because before you know it they’ll be gone for another year. And, even if you don't want to make anything then go out there and find some elderflowers and have a good smell - it is a beautiful scent. Better still, take children with you and teach them how to identify and use elderflowers so that we don't lose the art of foraging. 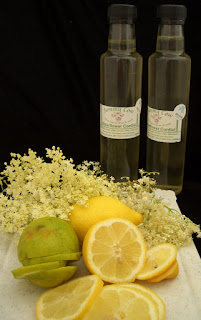