I don't know if you have ever played a Mr and Mrs type game where you have to see whether you can guess what your spouse gave as the answer to questions about themselves. Despite knowing my husband for 18 years, I'm not sure how many of these questions I would get right but one thing is for certain, if I was ever asked what he would choose off the menu in a restaurant I know the answer would be a fish dish. He, on the other hand, would know that I would always go for the meat pie.

I remember as a child giving the answer of meat pie in response to the question: what is your favourite food. In particular, it was my grandad's homemade steak pie that I adored. And my love of steak pie has continued into adulthood. So when I'm out and there is a steak pie on the menu I shall opt for it. Steak and Ale pie, as is so often offered in pubs, is equally as good an option, particularly when it is a dish of pie filling with a slab of puff pastry on top. Yum.

However, for a long time I have struggled to replicate such wondrous pies at home, much to my disappointment. Then, last week, I received my first order of a box of butcher's meat from a food box scheme. It contained a selection of meat that I was happy to receive but which I had not specifically chosen. Amongst this was a pound of casserole steak. Hmmm... I would rather casserole lamb if I'm honest so I pondered whether it was worth trying again with the elusive Steak & Ale Pie.

Having googled several recipes and blogs on the topic, I pulled together some ideas and set about making up my own recipe, using, of course, ale from the local Concrete Cow Brewery, and shallots from the garden. Several hours later, delicious smells wafted from the kitchen and my optimism grew. Despite the tempting smells, we were having chicken for dinner that night and the pies were destined for the freezer but later that week I retrieved a couple and we gave them a go.

So, this week when my butcher's box of meat arrived I was excited to see another batch of casserole steak inside for it meant a chance to restock my freezer with these yummy pies. Once again my kitchen smells delicious and I'm eagerly anticipating pie night.

Preheat over to 160°C, 150°C fan, gas mark 2. Toss the steak in the flour then brown all over in a hot frying pan. Spoon into a casserole dish then add the pancetta/bacon and shallots to the pan to brown. Add these to the casserole dish then put the remaining ingredients (except the pastry) into the frying pan. Stir, and scrape the bottom of the pan, until hot. Pour the liquid over the steak and place a lid on the casserole dish. Cook, covered for 2 hours then uncover and cook for a further 30 minutes until thick. Spoon about 150g of pie filling into suitable ovenproof contains/dishes and cover each one with a lid of puff pastry. It should make about 3 pies. Glaze the pastry with egg or milk and make a couple of steam holes in them. Freeze until required. Cook from thawed for 20-25 minutes at 190°C, gas 5, until the pastry is puffed and golden. Serve hot with potatoes and vegetables. 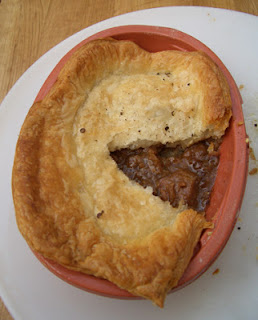 My husband is from the north and from the sort of poor background where they used to eat corned beef hash for dinner and the corned beef was so heavily diluted by the potato that it only appeared as the occasional pink thread. Coming from such a background, he prefers to eat Meat & Potato Pie - with those made by Hollands being a particular favourite. So he requested I padded his pie out with potatoes. To do this, I took 150g of the pie filling out once cooked and added it to 350g of finely diced, boiled potatoes. This I then made into 3 individual pies with a puff pastry lid.
Posted by Jammy Cow at 14:57 No comments: