Sometimes things just drop into place so perfectly that they are obviously meant to be. Like, for example, how I hadn't got round to opening up my subscriber copy of the September edition of the Good Food Magazine until the end of October. There I was about to start carving pumpkins for Halloween and out drops the usual load of leaflets... advertising mainly but also the monthly subscriber recipe card. And what should it be? Pumpkin cinnamon rolls. 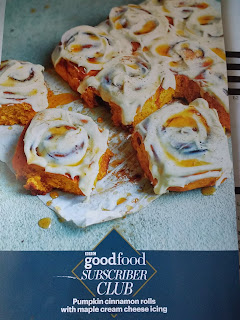 We are all huge fans of cinnamon rolls in this house and I usually find myself irresistibly drawn to them whenever I am at the same event as Geoff's Real Artisan Bread. He does amazing cinnamon rolls and I was really pleased to learn how to make them at the bread course he ran back in March - see my previous blog post about that. Since then I have made them a few times and they always go down well so it seemed only logical to give this recipe for pumpkin cinnamon rolls ago now that we had an excess of pumpkin to hand.

Of course, I can't help but tinker with any recipe and I used my bread machine dough setting to do all the hard lifting with this one. Actually, it was mainly the icing that I changed on this as I didn't have any cream cheese to hand so I made my usual icing sugar drizzle. Unlike Geoff's, which are all individual swirls, these ones are cooked together in a square tin so come out as a block that you can tear individual rolls from.

It was Saturday afternoon when I made these and Saturday evening by the time I had drizzled over the icing. And so, as we sat watching Strictly Come Dancing, we pulled off rolls from the batch and munched our way through the next dance. Often pumpkin in lost or disguised within a recipe and you could argue that the bake would be the same if it wasn't included. However, I have to say these rolls had a particularly nice flavour that I can only attribute to the pumpkin.

You could easily make these vegan by using soya milk and a suitable margarine instead of the butter.

For the icing:
100g icing sugar, 1 tsp vanilla, plus water

Use a bread machine on dough setting or an electric mixer or your hands to bring together the bread ingredients as a dough. Knead for 10 minutes and leave to rest for an hour. In the meantime, make the filling. Knock back the dough and roll out to a rectangle to 30 by 40cm. Spread the filling over the dough then roll up tightly along the longest length. Cut into 12 slices and place in a greased square tin. Bake at 180°C for 45 minutes then allow to cool completely. Make up the icing using just enough water to allow it to pour and drizzle this over the rolls. Tear off to eat. 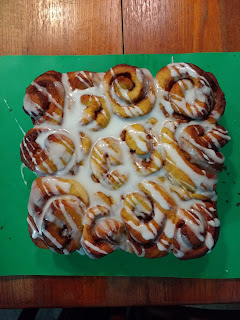