I first came across Pumpkin Katsu when I visited Yo Sushi a couple of years ago for the first time. Yo Sushi is a little daunting when you first go as not only do they have the relatively unusual serving arrangements of food dishes passing by on a conveyor belt, but the menu, unsurprisingly, is full of Japanese dishes. Although I had by that point eaten in Akasaka in Wolverton and been introduced to Japanese cuisine generally by my step-daughter, I was still a little unfamiliar with the dish names. Fortunately, I was with my eldest daughter and she had visited Yo Sushi a few time previously with my step-daughter so was a little more au fait with the surroundings and the menu. So it was her that grabbed a bowl of pumpkin katsu from the conveyor belt and suggested I gave it a go. 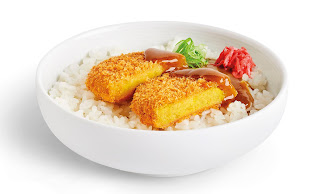 Needless to say, I enjoyed my first pumpkin katsu and I have made it a few times at home now. The easiest way I find is to just take slices of pumpkin, coat them in breadcrumbs and deep fry them. It feels as if the pumpkin wouldn't cook quick enough during the brief time in the oil but my previous attempts at pumpkin tempura (a future post) had told me that it would be fine. And indeed it is, coming out crispy on the outside and beautifully soft on the inside.

I don't know an awful lot about Japanese cuisine but a little research has told me that katsu can be used to refer to things deep fried in breadcrumbs. Chicken katsu, for example is very popular and you can even buy this as a ready meal in supermarkets. Katsu is then usually served with some kind of sauce. Often this is a curry sauce but equally it can be served with a tonkatsu sauce. This is very similar to a barbecue sauce and you can make it at home by mixing together some ketchup, Worcestershire sauce or soy sauce and oyster sauce.

The curry sauce that comes with the ready meal chicken katsu seems to be more along the lines of an Indian curry sauce or similar to the ones you might buy at a fish and chip shop. However, it seems more appropriate to me to make it with the blend of spices more usually associated with Japanese cuisine and for this you need some Japanese curry powder. You can pour the curry sauce over the pumpkin katsu but we prefer to serve it as a hot dipping sauce so that the katsu remains crisp and each diner can control how much sauce they want to eat.

I confess that a lot of my uses of pumpkin in recipes completely disguises the pumpkin so that you can't taste it or (often) even detect it in the resulting recipe. This is because it is there for what it adds to the texture of the dish or because it absorbs the flavours of the other ingredients (a property of pumpkin I particularly like). However, in katsu you can actually taste the pumpkin so if you have ever wondered what it tastes of and if you actually like pumpkin in its own right, then katsu will allow you to find out. 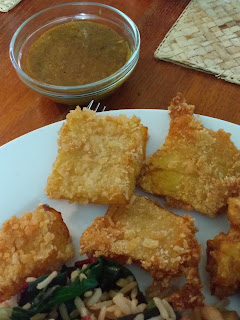 Cut as many slices of pumpkin as you wish to eat  - e.g. 3-4 pieces per person. Dip each slice firstly into the flour, then the egg and then the breadcrumbs to coat. Heat a good depth of oil in a wok then drop the coated pumpkin pieces into the oil in batches. Cook for a couple of minutes then turn over and cook until golden. Transfer to a baking tray in an oven to keep warm until all pieces are cooked. To make the sauce - fry the onion in a small pan then add the garlic and ginger. Fry one more minute then add curry powder and flour and cook for 1 minute. Gradually add water to make a thick dipping sauce then add soy sauce and honey and taste. Serve as a dipping sauce with the pumpkin.