I have been making Pumpkin and Ginger Teabread for years now. It uses fresh pumpkin, grated into the cake, so it one of those things you can only make when you cut into a new pumpkin. That's to say, it's doesn't use pumpkin puree, and as such you can't use puree saved in the freezer or from a tin. I, therefore, see the cutting of a new pumpkin as an opportunity to make this wonderful cake and all in all I don't make it more than once or twice a year. This, and its flavour, means it is remains held in high regard in our household.

It is worth noting that I have had some failures with this cake. There have been occasions when, despite being put into the oven for the required length of time, it has still been doughy in the middle. Despite putting it back into the oven for longer and even getting to the point where it was burning on top, it has remained apparently under-cooked in the middle.

The first time this happened, I had just had a new oven installed so I blamed the oven. However, since then, and with experience of similar failures with other recipes, I have concluded that it is in fact down to the pumpkin. Specifically, the water content of the pumpkin. Ideally the pumpkin flesh used in this recipe needs to be quite dry - with the consistency of, say, a carrot, rather than a cucumber. Some lantern type pumpkins can be quite soft and wet so if you have a pumpkin like that, forget it (or use carrot instead).

If you have one with a firmer flesh then give it a go because it is such a lovely cake when it turns out well - like a soft, gingery Madeira cake. And, should it hang around long enough to go a little stale, it also makes an ideal cake to line the bottom of a trifle. 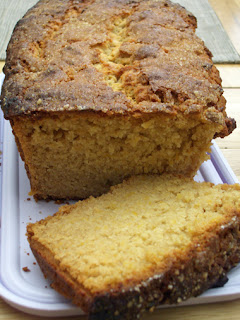 
Preheat oven to 180°C, gas 4 and line a 2lb load tin. Mix together the butter, honey, egg and pumpkin. Add the muscovado sugar, flour and ginger and stir until well combined. Pour into the tin then sprinkle over the Demerara sugar. Bake for 50-60 minutes until risen and golden. Check that a skewer inserted into the middle comes out clean. Leave in the tin to cool for 10-15 minutes before turning out to cool on a wire rack.
Posted by Jammy Cow at 01:44