When you set yourself the task of sharing 30 pumpkin recipes in 30 days, it seems only logical to have a look on Pinterest to see what other people are doing with their pumpkins. Pumpkins are a massive deal in the USA and they seem to get through a heck of a lot of pumpkin puree. It is even something they voluntary buy in tins - something that the average Brit would find a tad baffling.

Anyway, during my search I came across a recipe for Pumpkin Snickerdoodles. I had absolutely no idea what a Snickerdoodle was but it seemed like such a delightful word that I wanted to find out more. I really don't know how familiar the word Snickerdoodle is to people in the US but maybe it is like saying "Hobnob" over here, who knows.

It turns out to be a kind of cookie - large, fairly flat and with a soft chewy but not cakey texture. Intrigued, I decided to give it a go. Well, actually it was my youngest daughter who baked them as she likes to have a bit of a baking session at the weekend. It was very straightforward and produced something like a large soft gingernut biscuit. It's soft texture is really quite disconcerting when you first bite into it but then a moment later you find yourself enjoying it immensely, like being allowed the nibble on cookie dough before it goes into the oven.

Well, they quickly got the approval of both my daughters and they proved robust enough to be packed in their lunchboxes and maintained their soft texture for the 3 or 4 days that we managed to eek them out. Definitely a keeper.

Cream together the butter and sugars then add the egg, vanilla and pumpkin puree. Add all the dry ingredients then mix until combined. Cover and refrigerate for 30 minutes. Preheat oven to 180°C and line a large baking sheet with parchment paper. Use an ice-cream scoop to put portions of dough onto the baking tray. Flatten slightly and sprinkle over the Demerara sugar. Bake 10-15 minutes then cool on a rack. 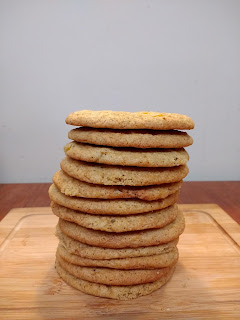