When you are the child of a woman in the midst of a 30 day pumpkin challenge, it becomes necessary to ask, "Does it contain pumpkin?" whenever an unfamiliar food is put before you.

And so it was when my daughter walked in through the door on Monday night to find dinner on the table - an (almost) classic English fry-up - bacon, egg, baked beans, mushrooms and... pancakes.

It has been a few years since I last made these savoury pancakes so it was no surprise that they were met with questions. She is a fussy eater so I never expect her to eat everything on her plate, even though it is often an edited version of what everyone else is having. So I kind of expected her to leave some of her dinner - only it was the fried egg that she left. Apparently she wasn't in the mood for a fried egg on this particular occasion. I usually find she is in the mood for a fried egg on the occasions when I decide she probably doesn't fancy one and don't cook one for her. Contrary, I believe is the word for that! Anyway, the pancakes went down a storm so that's the main thing.

They do go particularly well with a fried egg on top but there are other ways to serve them and they are great for breakfast or lunch as well as dinner. Previously I have made a vegan version of them by using soya milk, taking out the egg and replacing it with a total of 3 tsp baking powder and a total of 3 tbsp of oil, plus 2 tbsp water. As they are a sort of Scotch or American pancake, it is nice to scatter something into the middle of the pancakes where you might expect sultanas in a sweet version. For this, I would suggest chopped up red pepper, mushroom, sweetcorn or shallot pieces and to give them a quick fry before starting to fry the pancakes. Once you have poured the batter into the pan, scatter your ingredient(s) of choice into the centre. I also think the spice combination of Japanese curry powder compliments pumpkin particularly well but you can use Indian curry powder instead.

If you don't eat all the pancakes in one sitting, they can be bagged up and frozen for later use. Thaw out then fry on a low heat on both sides for a minute or two or pop in the microwave or even in the toaster. 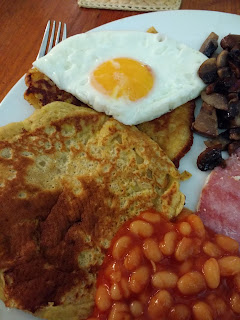