We love a cheesecake in our house and I enjoy making different cheesecakes with the changing seasons as different ingredients come to hand from the garden. Usually these are soft fruit or tree fruit but the year usually starts with a rhubarb cheesecake and ends with a pumpkin one.

Pumpkin seems to suit spicy flavours so it is no surprise that in the USA they have "pumpkin spice", which is very similar to our "mixed spice". It can also be paired with ginger or cinnamon on their own and even a bit of vanilla works well.

Cheesecake recipes fall into two categories - baked or non-baked. Often soft fruit suit the non-baked ones but pumpkin works best with the baked cheesecake method. When baking a cheesecake there are two main issues - one is making sure it is cooked just enough to set it but not too much to be kind of sticky in the mouth. And the other is making sure that the cheesecake cools down slowly enough that it doesn't crack. However, as I own an Instant Pot electric pressure cooker, I have recently learnt that cooking a cheesecake in the Instant Pot takes away both of these issues.

Well, it certainly is easy and the cheesecake came out cooked to prefection and it cooled without cracking too, so if you have an Instant Pot or other electric pressure cooker I would definitely recommend giving it a go.

This recipe is fairly low in sugar and the resulting cheesecake isn't very sweet. On its own its taste is reminiscent of an egg custard tart and I think the lack of sweetness would suit some people's palette. However, my family found a drizzle of maple syrup and a good dollop of sweetened whipped cream really lifted both the flavour and the mouth-feel.

Melt the butter in the microwave in a small bowl. Blitz the biscuits in a food processor and add the crumbs to the butter. Stir well then press the mixture into the bottom of a 7 inch circular cake tin. Place in the fridge to cool. Mix together the cream cheese and icing sugar until smooth then
add the eggs, stirring with each addition. Put in the pumpkin puree and 55g of the double cream. Add the vanilla and mixed spice and mix thoroughly. Tip the mixture into the cake tin then place on a trivet in theInstant Pot above 2 cups of water. Seal and set manual for 30 minutes then allow natural pressure release. Remove to cool to room temperature then refrigerate for 4 hours. Whip up the remaining double cream with a tablespoon of icing sugar then serve slices of cheesecake with a drizzle of maple syrup and a dollop of the cream. 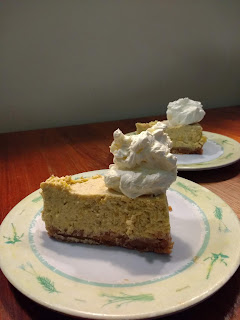