I always think Swiss Rolls look as if they are complicated to make. However, they are fairly straight forward as long as you have the correct sort of baking tray and enough time and patience to wait for things to cool.

The biggest headache with Swiss Rolls is the cake cracking when it is rolled up. The way to avoid this is to roll it up whilst it is still warm and to leave it rolled up until it is very nearly at room temperature. I genuinely believe that the addition of the pumpkin puree to the cake makes for a more pliable cake that is less inclined to split when rolled.

You could, of course, fill the middle of the roll with butter icing but I think the cream cheese icing has a better, less sickly flavour. It does, however, have a tendency to go a bit slack when first mixed so it is best to mix it whilst cooking the cake and chilling it in the fridge until the cake is cooled.

I have plenty of different flavours of jam to hand but I think plum jam is best to use for this one. I guess apricot would work well too but I don't have that as I don't have an apricot tree. Anyway, it needs to be a plain-ish jam that doesn't smack you round the lips like blackcurrant or raspberry would. Because there is spice in the cake, I would avoid a spiced jam too, so a plain plum rather than, say, plum and cinnamon, works well.

Grease and line a Swiss roll tin - that's just a baking tray with rim all the way round. Preheat oven to 190°C, gas 5. Cream together the butter and sugar then stir in the eggs. Sift in the flour, spice and bicarbonate of soda then add the pumpkin puree and stir well. Pour this mix into the lined tin and level out. Bake for 20 to 25 minutes until springy to the touch. Remove from the oven and carefully maneuver the cake on its paper backing onto a clean tea towel then use the tea towel to roll it up into the Swiss roll shape. Leave it like this to cool completely. Mix together the cream cheese, icing sugar and vanilla extract. Once cooled, unroll the cake again and spread the cream cheese icing and the jam over it. Remove the baking paper as you roll it up again then sprinkle with caster sugar. 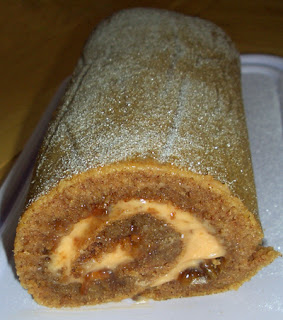