This year we carved one large pumpkin and 4 little ones. My youngest daughter was in charge so they all ended up cute, not scary. In the process we generated 8oz (225g) of usable pumpkin from the bits cut out of the faces. Once the lanterns had gone outside, I chopped up the pumpkin pieces and steamed them for 20 minutes until soft then bagged it up and put it in the fridge. 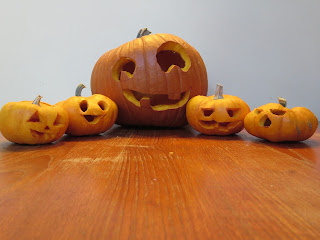 The next morning, I squidged the pieces of pumpkin in the bag between my fingers to mush them up then I loaded the ingredients for the bread into my bread machine and set it to "dough". It is entirely possible to do this bit by hand but the bread machine just gets on with it and I can do other stuff. An hour and half later, the dough setting finished and I knocked back and shaped the dough and left it to prove in the tin for a bit before cooking it in my oven. Although bread making take time, there isn't very much of it that involves me actually doing something.

The bread was ready in time for lunch and my daughter ate some slices with some homemade leek and potato soup that I had made a few days before in my Instant Pot - another time-saving device that allows me to get on with stuff whilst it works its magic. My all time favourite thing to do with fresh-from-the-oven bread is to eat it with butter and slices of mature Cheddar, so this is what I did. This is known in our house as "A Fairytale Lunch" - not only because it is so magically but because people in fairytales seem to mainly eat bread and cheese (and occasionally a bowl of porridge or turnip soup!). 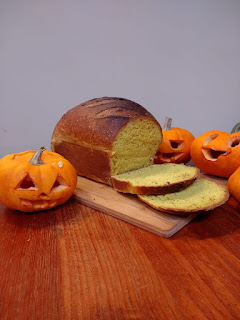 So here is my recipe for Golden Pumpkin Bread. The pumpkin gives it a slight yellow hue but I pepped this up a bit with the addition of a teaspoon of turmeric. I think it makes it look better and turmeric is amazingly good for you (although possibly not in this small a quantity) and it doesn't change the flavour. Feel free to leave it out if you prefer.  I also used up some of the left-over whey that I generate when making yoghurt. Yoghurt making is another Instant Pot thing, which it does overnight whilst I'm sleeping so it is absolutely no effort at all! The next day I strain the yoghurt through muslim to remove some of the whey, leaving behind a thick Greek-style yoghurt. As this is a weekly task, I have found lots of interesting ways to make use of the whey and using it in bread is just one of them. If you haven't got whey, you can use 110ml of buttermilk and 45ml water.

I've included the recipe for leek and potato soup too, should you fancy that.

Gently combine all the ingredients to form a dough then knead for 10 minutes. Leave, covered, in a warm place for an hour to an hour and a half to prove. Knock back and shape ready to go into a 2lb loaf tin. Place dough in a greased/lined loaf tin then cover and leave to rise for 30-45 minutes. Preheat oven to 190°C. Uncover, slash the top of the loaf then put in the oven and throw a quarter of a cup of water into the bottom of the oven to create steam. Cook for 40-45 minutes then remove from the tin to cool.

Set to Saute and put a little olive oil in the bottom of the pan. Fry the potato for a minute or two then add the onion, followed by the leek and eventually the garlic. Stir constantly to prevent sticking, particularly from the potato. Switch off. Add the stock and stir well to deglaze the pan. Put on the lid and close the valve then set to Soup for 15 minutes and leave for Natural Pressure Release. Remove lid and blend until smooth with a stick blender.

Heat the oil in a large sauce pan and fry the leeks and onion, stirring constantly to avoid sticking until the leeks are soft but not brown. Add the potatoes and continue to fry for another 2 to 3 minutes then add the garlic and fry for one more minute. Add the stock and bring to the boil. Cover the pan and simmer for 30 minutes until the vegetables are soft and the potatoes are breaking down. Blend in a food processor until smooth and season to taste.
Posted by Jammy Cow at 04:06