The Victoria plum tree in our garden tends to alternate between years of abundance and years of lean. One year it became so overloaded with fruit that the branches snapped! Lesson learned, I try to remove fruit before that happens now.

When it is an abundant year, I try to make sure I make the most of it, making jams and chutneys and getting plenty of them stored away in the freezer. We also try to eat a fair few and use them up in baking.

My husband always likes something sweet to eat with his after dinner cup of tea but he prefers that to be an oaty biscuit or a flapjack. So in plum season I have been known to make him plum flapjacks! They are tasty and worth making but it should be noted that after a couple of days the moisture in the fruit makes the flapjack go soft so I would recommend eating them up fairly quickly. Not that that should be too difficult!

Wash and chop the plums then sprinkle with spice, salt and 55g of the sugar. Set aside. Preheat the oven to 200°C and grease a suitable tin. Melt together the remaining sugar, butter and syrup. Put the oats and flour in a large bowl and stir together then pour over the melted mixture. Combine well then tip half the mixture into the tin. Layer the plum mixture on top. Sprinkle the rest of the oat mixture over the top and gentle press down. Bake for 40-45 minutes then cut into 12 pieces whilst still warm. Leave to cool completely in the tin. 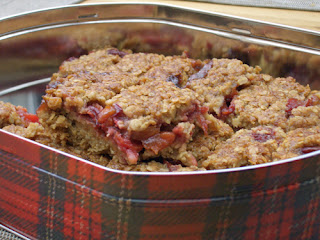