It's the weekend, it's half term, there is an extra hour in the day and it's October. What better time to cook some apple pancakes for breakfast?

Cooking pancakes for breakfast isn't the sort of thing you can do on a school/work morning but they are a nice thing to cook for a relaxed weekend breakfast. Once cooked, however, they can be stacked in the fridge and stuck in the toaster to quickly heat for breakfast or elevenses after that. Or you can freeze them for another occasion. They make a great dessert too, served with ice-cream.

With a bucket of Bramley apples by the kitchen door, it seems only natural to use one in pancakes at this time of year.

Mix together the flour, baking powder, caster sugar and cinnamon in a large bowl. Beat together the milk and egg then gradually stir this into the dry mix until to forms a thick batter. Set aside. Peel, core and chop the apple and place in a small bowl with the brown sugar and raisins. Cover and microwave for 1 minute until soft. Heat some oil in a frying pan then ladel two dollops of batter into the pan. Add a spoonsful of the apple mix to each dollop straight away. Fry for 2-3 minutes then flip and continue frying until cooked on both sides. Serve hot with maple syrup and cream. 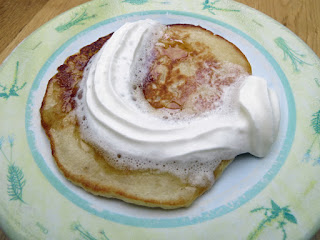