It is quite a common idea to "hide" vegetables inside other food. Some might argue that I do it all the time when I make a courgette cake or stick pumpkin puree into something. But that isn't the same. No one eats carrot cake because it is the only way they can stomach carrots and they think it will add to their five-a-day! No, they eat carrot cake because it is delicious! And that's why I make cakes with vegetables in them. I'm upfront about it too - "Here, lovely children, eat this courgette muffin."

When I don't think it is helpful to put vegetables within food is when it is "hidden". If you are blending carrot and courgette into your kids' pasta sauce or pizza topping and not telling them that's what you have done then it isn't helping them to learn that they like pasta sauce with added carrot and courgette. They won't realise that there is a way that they can enjoy those vegetables that in other forms they don't enjoy. So, ok, put it in their pasta sauce and don't tell them at first, but make sure that at some point, when they have clearly demonstrated that they like it, you do tell them. They need to learn to associate certain flavours with certain foods and then when they are an adult they will know that they actually like that food and not spend the rest of their lives thinking that they don't.

I was a fussy eater and looking back at my former self I am as baffled by my behaviour as I am by the behaviour of my eldest daughter. I mean, what did I think would happen if I just relaxed and tried the food?! And you know what, it still kind of persists into adulthood. If I get flecks of broccoli florets on my carrots, I will brush it off with a knife rather than shoving the lot into my mouth even though I know I will probably not even taste the broccoli! It is a mental battle against illogical thinking in many regards.

And now my eldest daughter is at that crossroads in her life where she appreciates she is now dipping her toe into adulthood and she doesn't want to look like an idiot in front of other people because she doesn't like certain foods. She is fully aware of the nutritional make-up of food and how to get a balanced diet and she WANTS to eat one, yet she still struggles to eat certain foods.

Yes, there are certain foods she still flatly refuses to eat but she if tells me that she'll eat mushrooms if they are chopped finely, then I will chop them finely. And if she will eat food that has grated carrot or courgette in it, fully aware of its presence, then I think that is ok too. These are the first steps towards less finely chopped food and food presented on its own, without having to be incorporated into other foods.

At the weekend I made us all some hidden veg pork and apple burgers. This was not because I wanted to be sneeky about it or feel triumphant should she eat her burger and unwittingly enjoy it. No, it was because I figured it would make the burger taste nicer whilst at the same time finding an agreeable way to boast the vegetable content of her diet.

And you know what, they were really tasty burgers with a lovely moist texture so I think I shall be making these again in the future.

Using a food processor, finely chop the onion, garlic and mushrooms then fry them with the courgette for 5 minutes until cooked and not too wet. Leave to cool. Add all the ingredients to a large bowl and stir very well, using your hands, until well combined. Weigh out 100-115g of mixture and press into a biscuit cutter to form patties. Chill for at least half an hour or freeze. To cook, fry on a medium heat for 7 or 8 minutes on each size. Serve in a burger bun with salad, sauces and relishes of your choosing. 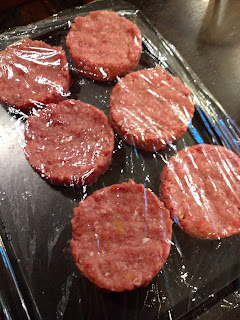 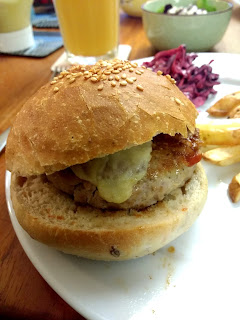 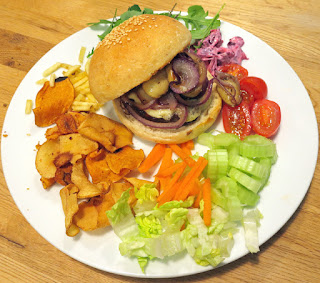