Maybe it's because my grandad came from Dorset and I have something in my genes, or maybe it's because this traditional cake has the perfect balance of sugar, spices and fruit, but I don't like to let an apple season go by without baking a Dorset Apple Cake or two.

A simple, no fuss cake, with a lovely crunchy topping, a slice is just perfect in the middle of the afternoon whilst I stop for a breather. Savouring every mouthful, I watch the squirrels in the garden, busily hiding nuts, somehow unable to grasp that tomorrow there will be more nuts in the birdfeeder. 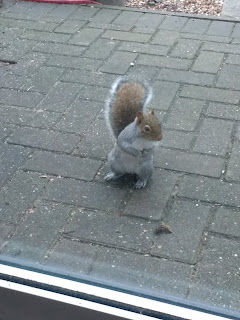 Preheat the oven to 180°C and line a 20 cm circular cake tin. Put the flour and cinnamon in a bowl and rub in the butter until it forms a crumb texture. Stir in the sugar. Add the egg and milk to form a batter. Stir in the apple pieces and sultanas. Spoon into the cake tin then sprinkle over the Demerara cinnamon mix. Bake for 40-50 minutes.