The last trug of pears are rapidly ripening now and I really need to use them up but I am reluctant to just chop them up and freeze them for later use in preserves as I have been enjoying a variety of pear based desserts and I still have ideas I want to try.

One of the problems (if you can call it that) of having friends who are also artisan food producers, is that you get exposed to some really lovely food. What could possibly be wrong with that? Well, once you have tasted it, you don't want to go back to the rubbish you were eating before.

I certainly find this the case with chocolate. I haven't had Cadbury chocolate in the house for years because I find it awful, quite frankly, but I don't mind buying more continental-style chocolate. As it happens, Lidl do a very decent dark chocolate that I like to use in cooking. However, no dark chocolate ever lives up to the quality of the dark chocolate that Steve Mills from The Chocolate Mill uses in his truffles. As such, I asked him if he would buy in some extra chocolate for me from his supplier. And whilst he was at it, I wondered if I could get some milk, white, ruby and gold chocolate too.

Honestly, a bag full of high quality, interesting chocolate to play with was just the boost I needed during lockdown and we had some fun trying out some ideas over the summer. Yes, I did, as always enjoy the flavours of the dark chocolate but I found the ruby chocolate and gold chocolate the most fun to experiment with because they are so novel, yielding interesting colours as well as flavours. I should probably share the recipe for the ruby chocolate ganache that I made for a rather spectacular strawberry Victoria sandwich cake in July but that is a story for another day.

Anyway, restocked with fresh supplies of gorgeous chocolate in time for half term, we have once again been experimenting and I knew that I wanted to try out the hunch that I had that the gold chocolate would pair particularly well with pears. So, with all the ingredients to hand, I set about making a pear and gold chocolate cheesecake. And yes, it most definitely worked - somehow taking on the taste of a silky smooth salted caramel cheesecake, despite not adding any salt to the recipe!

To serve, I scooped out some balls of the pear and vanilla ice-cream I had made at the weekend. Honestly, vanilla ice-cream doesn't get any better than that! Somehow the pears seem to make it taste extra creamy and extra vanilla-y without that weird back of the throat burning you can sometimes get with over flavoured vanilla ice-cream.

So, some random Thursday evening in October we enjoyed an absolutely top class dessert. And why not, as there is so little else permittable these days to raise the spirits!

For the base
150g shortbread biscuits, crushed in a blender
75g butter, melted

For the biscuit base combine the crushed biscuits and the melted butter in a bowl then press into the greased base of a 20cm circular tin or dish. Place in the refrigerator for at least half an hour to solidify.

Next, gently steam the pear pieces with the vanilla pod for about 5 minutes until soft. Cut open the vanilla pod and scrape out the seeds onto the pears. Put in a food processor and blend until smooth. Set aside to cool.

Next, melt the chocolate and butter in a bowl over a pan of simmering water. Leave to cool. In another bowl, mix together the cream and cheese and beat until smooth. Once the chocolate mix is suitably cool add it to the cream mix and stir thoroughly. Add the cooled pear mixture and stir in. Spoon the mixture onto the biscuit base. Return to the refrigerator to chill for a few hours or over night to set before serving.

Peel, core and chop the pears into pieces. Cut the piece of vanilla pod in half length-ways and scrape the seeds out onto the pieces of pear then add the pod shells to the pears too. Steam the pears and vanilla together for 10 minutes until very soft. Remove the pod shells then blend the pears until totally smooth in a food processor, adding the sugar towards the end of the blending process. Allow the pear puree to cool down then mix the puree with the milk and double cream. Pour into suitable containers and freeze for 2-3 hours. Remove from the freezer and beat then return to the freezer. Repeat every two hours until solid. 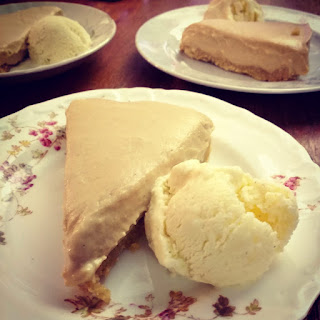