What to do with yellow beetroot

It was a funny coincidence that the day after I had grated part of an enormous yellow beetroot into beetroot and potato rostis, my mum mentioned that she had what she thought looked like yellow beetroot delivered in her veg box.

She had just signed up for OddBox deliveries and she was really chuffed with her first box, although she wasn't entirely sure what she was going to do with the sweet potatoes and she wasn't sure she had correctly identified the yellow beetroot. She took a photo and texted it over to me and from what I could see she definitely had two large yellow beetroots not much smaller than the two monsters I had just harvested. 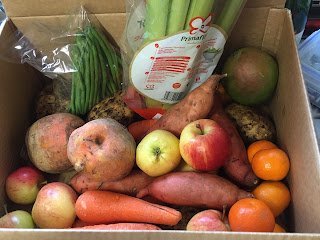 Her next question was, what should she do with them and how could she cook them. I have a bit of an eye for cooking times with beetroot, having practised this mysterious craft for more than 20 years now and I told her that hers would take 40 minutes of boiling or 30 minutes in the pressure cooker.

It wasn't long after that that she sent me a photo of her freshly cooked cubes of yellow beetroot. I was shocked! There is an unwritten law in beetroot-craft that states that a beetroot must be cooked whole, unpeeled and not even so much as shown the blade of a knife. Everyone knows that you twist (no cut) the leaves from the top of a beetroot and you leave its root in tact and boil it whole, or so I thought. With this assumption I had neglected to include these details when explaining the cooking times to my mum so not only had she peeled it, she had cubed it and cooked it like that for 15 minutes.

"You shouldn't peel or cut beetroot before cooking," I texted curtly back (I was working at the time).

This made me laugh and also to take stock for a moment. It is one of the issues with ancient practises such as kitchen gardening. "Wisdoms" get passed down from generation to generation without people necessarily questioning why they are done and if they are indeed useful or necessary. So did is actually matter if your beetroot bleeds, especially if it yellow? It definitely wouldn't make it inedible or toxic, maybe it would lose some nutrients, and, worse case scenario, it might stain your kitchen (if its purple).

I reassured her that she hadn't rendered the beetroot inedible and she went on to enjoy it in salad for the next couple of days. 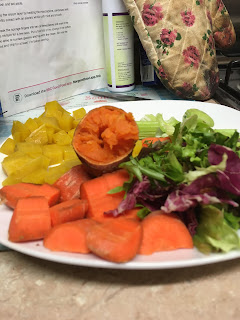 In the meantime I had one enormous yellow beetroot left on my draining board (and several still in the ground), so what should I do with it?

The thing about yellow beetroot is that it is different from purple beetroot. I mean, it tastes the same and it could be used in exactly the same way as purple but the colour really makes a difference. Whereas I might turn large purple beetroot into chutney, no one wants a weirdly off-putting light brown beetroot chutney. On the other hand, a yellow beetroot can be used in a casserole without causing the whole thing to turn an alarming colour. So how best to enjoy this particular shade of beetroot.

Having made the beetroot and potato rostis and a medley of roasted vegetables with the other one, I was warming to the idea of using it in a way that wouldn't give a purple result.

So the following weekend I made a beetroot and orange cake. It is actually a recipe carrot cake I have been using for years but I figured that yellow beetroot and carrot are interchangeable and it proved to be the case.

Preheat oven to 160ºC (gas 2) and place the cake tin liner in a cake tin. In a large bowl, beat together the oil, sugar, eggs, vanilla, orange rind and juice. Peel and grate the beetroot and stir it into the mix. Add the sultanas. Sift in the flour, spice, raising agents and add the wheat germ/bran. Stir well then spoon the mix into the cake tin. Bake for 60 to 70 minutes, test with a skewer. Cool in the tin. 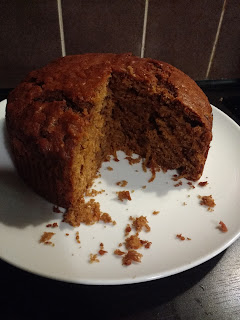 And later in the week I enjoyed inventing the pleasing sounding Bacon, Beetroot and Brie Muffins, which we had for lunch with salad and crisps.

Chop up the bacon and fry quickly to brown then set aside to cool. Preheat the oven to 180°C and line a muffin tin with paper cases. In a large bowl, mix together all the dry ingredients. In a jug, beat together the milk, egg and oil. Pour the wet ingredients into the dry and add the beetroot, brie and bacon before quickly stirring together until just combined. Dollop the mixture into the muffin cases then bake for 25 minutes. 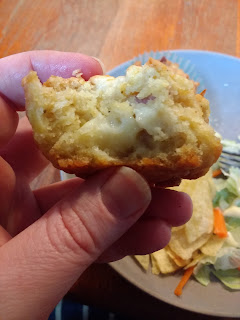 Although I am sure that little flecks of purple in either of these would have been fine or even amusing, it was nice to stealthly ninja beetroot into baked goods in such as way as to not draw it to anyone's attention. Maybe useful to know if you are trying to feed someone who would be put off by its presence if they knew it was there?