I had a piece of pork to roast the other day and I knew it would create leftovers. Some leftover meat is easier to deal with than others and I often find myself a little lacking in inspiration when it comes to cooked pork. As such, I had a look at what Hugh Fearnley Whittingstall recommended in his leftovers book.

As a result, we had pork rissoles on Monday. Never made them before but I particularly liked them as they also used breadcrumbs - another leftover ingredient. 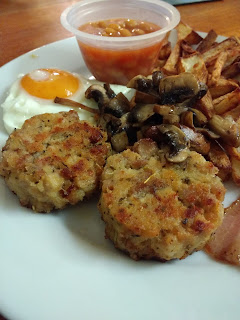 On Friday it was Chinese New year so I saved a small piece of the pork to try Hugh's suggestion of pork wontons. He said that mixing pork with brown sauce worked surprisingly well as a wonton filling. So, I bought a pack of filo pastry, cut up a little bit of pork into small pieces, dolloped on some homemade brown sauce and created some wontons. And, you know what, he was right - I was surprised by how well it worked. 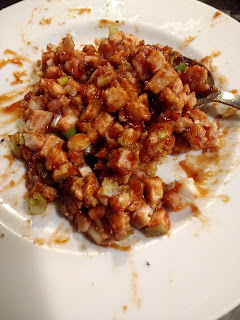 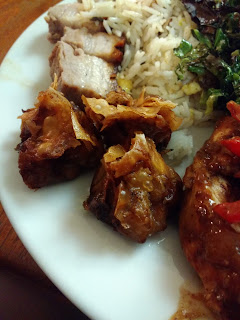 However, I had a pack of 10 sheets of filo pastry and I had only needed one sheet for my wontons.

Asking around the internet for filo pastry inspiration, I decided to give apple strudel a go. I'd never made it before but I don't really know why. The only thing was I didn't have any apples left in storage - just bags and bags of cooked apples in the freezer.

So on Sunday morning I took a bag of frozen apples out of the freezer and tips its contents into a sieve over a bowl. I figured I didn't want it particularly runny as a filling so I would drain out the excess moisture as it thawed.

I was pleased to see a mention of breadcrumbs in this recipe too, both because I like using up stale bread in useful ways, and because I figured it would help stablise the potentially sloppy mixture.

It was simple enough to turn the cooked apples into strudel filling and it was easy to layer the filo pastry up, with generous brushings of melted butter in between. I was also pleasently surprised by how easily and neatly I managed to fold and roll the pastry into a self-contained bundle. 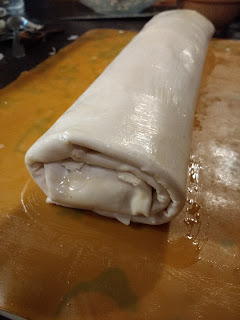 I figured that the wet filling probably wouldn't do the pastry any good if I left it to sit so I got it into the oven straight away then put it back into the oven later to reheat in the residal heat after removing the roast. I served it with the last of the pumpkin ice-cream. An excellent use of ingredients for the perfect winter dessert. 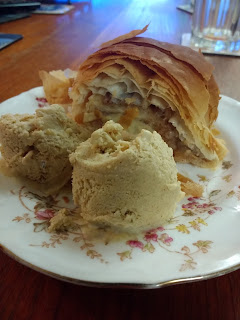 Preheat the oven to 190C and line a baking tray with baking parchment. Mix the apples with the cinnamon, lemon juice, sugar and sultana. In a small frying pan, melt 20g butter and fry the breadcrumbs until golden-brown, then add to the apple mixture. Melt the remaining butter in a pan. On a clean, dry tea-towel or silicone baking mat, lay a sheet of the filo and brush with some of the melted butter. Lay another sheet on top and repeat until all the filo pastry is used. Pile the filling along the length of the pastry along one side about 2 cm from the edge and carefully fold in the ends of the pastry then roll the pastry up to enclose the filling, finishing seam side down. Brush with the remaining melted butter. Bake for 40-45 minutes, until golden-brown. Leave to cool to room temperature and dust with icing sugar. Slice and serve with cream, ice cream or custard. 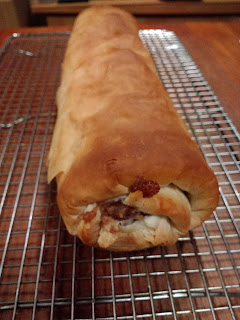