There is a notice on the allotment gates currently stressing, in no uncertain terms, the importance of maintaining social distance when on site. This is not particularly tricky to abide to, especially at this time of year when trips to the allotment tend to be fleeting and rarely coincide with anyone else. Even if there are other people on site, each allotment plot is 10 m by 10 m and I have never, in the 24 years of having a plot, felt the need to tend to the edge of my plot at the same time as my neighbour is tending to the equivalent edge on theirs. Even when we have stopped to have a conversation, it has always been within comfortable shouting distance rather than face to face.

So, on a recent trip to dig up potatoes, it was vaguely nice to see someone else on site rather in the least bit alarming. She was three plots away and tending to her apple tree. In fact, she was there with her husband, which in itself is rare as the plot is very much her hobby rather than his, but he had clearly been called in for some heavy duty work and she seemed to be pointing to various bits of the tree that needed pruning. They were fully engaged in their task and I wasn't even able to wave hello as I seemed to have snuck in unnoticed.

It was nice to see her caring for the tree as it had produced an absolute bumper crop in 2020. So much so that she had asked several of the plotholders, including myself, to help themselves to apples from it next time it was safe to do so. 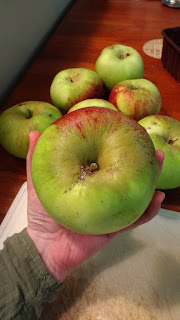 Now, I love a Bramley apple, especially the way they mush down when cooked, so I had taken her up on this, at first filling a bucket with windfalls each time I came to visit and eventually, on her insistance, helping to finish picking apples from the tree itself. These I packed carefully into open boxes in the garage whilst I worked my way through them, cooking them up and freezing them in 1 pint portions ready for use in jam, chutney or pie. 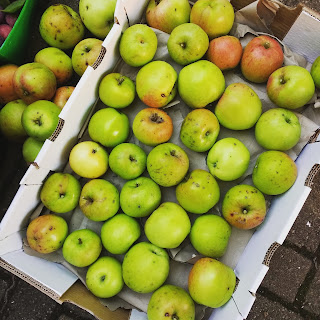 With the general other abundances from the allotment during the autumn to attend to as well, I only made slow progress on the boxes of apples but in fact they stood very well as they were, only needing the occasional eviction of a mouldy one. Indeed, it was only last week that I took the last two apples out of the box to use in a recipe for salted caramel apple pudding. Here's hoping that with its winter care and attention, the tree will go on to crop as heavily again this year, and maybe by then I will have used up the apples in my freezer! 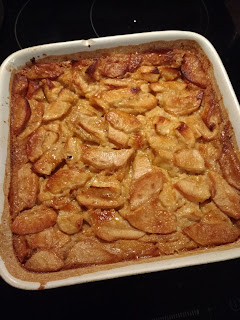 Preheat oven to 180°C and butter a 30 by 20cm ovenproof dish. Peel, core and slice the apples then scatter over the base of the dish. Put the eggs, yolks, sugar, milk, cream, 200g of caramel, vanilla and salt in a large bowl and stir with a whisk until well combined. Gradually stir in the flour to form a smooth batter. Pour the batter over the apple pieces. Bake for 50 to 60 minutes until set all the way to the centre. Heat up the remaining caramel and serve up portions of the pudding with a drizzle of caramel and scoops of ice-cream. 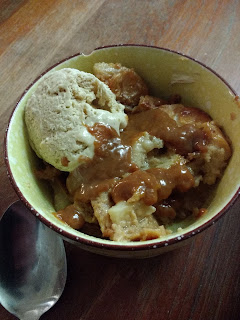