If there is one thing that COVID times have taught me, it is never put off until tomorrow something which you can do today. Clearly as this is an ancient saying, it is not an original thought or revellation but it is so much more obvious now than under normal circumstances. I'm sure we have all experienced a moment when we thought, oh I'll do that next week or see that person soon, only to have restrictions put in place that meant that it was no longer possible.

So when it was sunny briefly last Tuesday I asked Steve if he fancied digging up some potatoes that afternoon as we were running low. It wasn't an immediate problem as I had planned a rice meal for dinner that night and noodles for the day after that. However, it was still a surprise when Steve said he didn't fancy digging up potatoes that day. With rain forecast Wednesday and Thursday, I decided I would regret missing the opportunity to dig up potatoes in the relatively pleasant conditions of Tuesday so I pulled on some warm clothing, grabbed a bucket and a fork and marched off to the allotment myself. 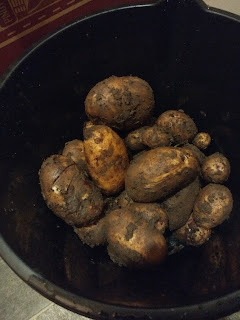 And yes, I was very pleased at the end of a wet Thursday when I was able to grab a few potatoes to make mashed potatoes to go with our sausages for dinner. In fact, I was so enthusiatic about my haul of potatoes that I used way too many of them and we couldn't eat all the mash.

Never fear, mashed potatoes are well worth keeping and I put them in the fridge whilst I dithered about which leftovers recipe I would use them in.

The previous weekend Jaclyn had recorded a vlog about making doughnut using up some of the apple sauce we made before Christmas, based on a recipe in the Good Food Magazine. We enjoyed custard and apple doughnuts after our Sunday roast whilst watching The Great Pottery Throwdown. 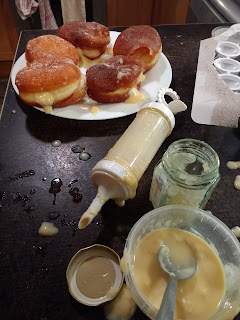 Maybe that was why the nag in my brain kept coming back time and time again to using the mashed potato up in doughnuts. This was something we had first tried years ago, based on a recipe from Sorted Food. Having said that, the recipe had failed and we had had to add way more flour to it to get it to work but I didn't weigh the amount we had used so I had never written the recipe down.

So this Sunday I went back to Sorted Food and found the recipe unaltered and just as soppy but this time I sensibly noted how much extra flour I needed and how much mashed potato I used and I altered the method, based upon the success of the previous weekend's doughnut making.

With the doughnut dough knocking around in the bread machine I gave in to the call of the sunny weather and went outside for a bit. I didn't know what I would do when I got round to the allotment but I knew there would be plenty that needed doing. Indeed, one of my fellow allotmenteers was sat in the boot of his car, pulling his whellies on when I got to the allotment gates and he commented on what a lovely afternoon it was for it. For what? It turned out neither of us knew but we both knew we would be busy.

So I pottered around for a bit, tidying away bamboo canes, still stood upright with dead plants tied to them. I pulled up a few easy weeds and spread some black plastic over a patch of ground to suppress more weed growth. And I said a cheery hello to my allotment neighbours before we settled in to a conversation at a respectful distance about the struggles of lockdown and our gratitude for a piece of mud that offered a reason to be outside on a sunny January afternoon.

Back inside, the dough was ready for knocking back, shaping and another prove and whilst I waited for the rise, I peeled and chopped 3 pounds of Bramley apples from storage. With the phone wedged under one ear whilst I talked to my mum, I fried the doughnuts then turned the apples into Toffee Apple Jam. Then squirted some of the suitably cooled jam into the centre of each doughnut.

And so, as we watched The Great Pottery Throwdown, Ros said, "Am I having deja-vu or were we eating doughnuts this time last week too?"

"I have created a new tradition," I explained, "of eating doughnuts whilst watching the Pottery Throwdown. What flavour would you like next week?"

Sugar for dusting
Oil for frying
200g of jam

Load the doughnut ingredients into your bread machine and set to dough. When finished, knock back the dough and roll out to about 1cm thick. Use a 7cm circular cutter to cut out the doughnuts and place them on a well floured board/tray. Cover with greased Clingfilm and leave to prove in a warm place for half an hour. Heat 2-3cm of oil in a deep frying pan until hot (aroun 170-180°C) then fry the doughnuts in batches for about 2 minutes on each side. Sprinkle with sugar whilst still hot then put on a rack to cool. Once cool, use a piping bag or syringe to fill each doughnut with jam or custard or sauce of your choosing. 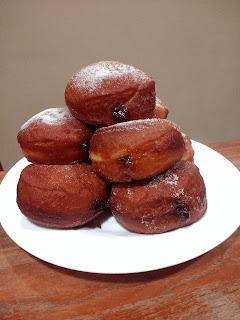