I had a lovely box of fresh fruit and vegetables delivered last week from Jasper's Catering. It is very exciting to get a mixture of fruit and vegetables that you might not otherwise have chosen but it can be slightly inconvenient if it contains something that you don't like or duplicates something you already have. As it happens, between us we like everything that was in the box but unfortunately, we already had quite a few tomatoes in. 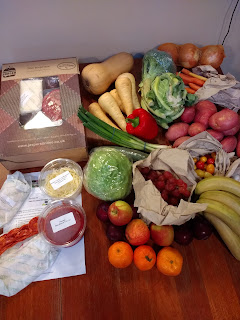 With the fresh box containing a nice selection of small tomatoes in both red and yellow varieties that my youngest said actually tasted like the tomatoes from the allotment, it was, inevitably, the large tomatoes from the supermarket that got neglected - and they were older to start with!

Nobody in this house seems to want anything to do with a tomato once the skin goes wrinkly so I figured the only way to save them from the compost bin would be to cook them into something. With food and garden waste bin collections temporarily halted due to a lack of staff after two binmen died of COVID and others had to isolate, and with COVID and Brexit disrupting food supplies, there is no way I'm throwing anything away if I can help it!

And so, with both my girls tied up with "live" online lessons until half past one today, I decided to rustle up some tomato soup ready for our slightly late lunch.

Four wrinkly tomatoes, half an onion, a little pasta sauce and some leftover single cream later and I had a batch of "Cream of Tomato Soup". 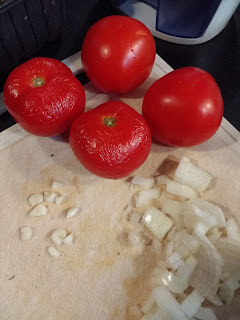 "Well, it ain't Heinz," declared my eldest upon a tentative sampling, then went and opened herself a tin of Heinz.

My youngest, on the other hand, rather liked the herby flavour and was grateful for it after an "awkward" morning of Teams meetings.

What was left I bagged up and froze, ready for another day. Four tomatoes saved!

Finely chop the onion and saute for 3-4 minutes then add the pieces of red pepper and fry for another minute before adding the garlic. Plunge the tomatoes into boiling water for a minute or two then remove the skins before chopping. Add the chopped tomatoes to the pan and continue to fry for a couple of minutes until they have started to soften. Add the stock and the pasta sauce then bring to the boil. Simmer for 10 to 15 minutes until it is all soft then remove from the heat. Use a stick blender to blend until smooth. Taste and add salt and pepper as necessary. Return to the heat then pour in the cream and stir through until warmed. Serve hot with bread. 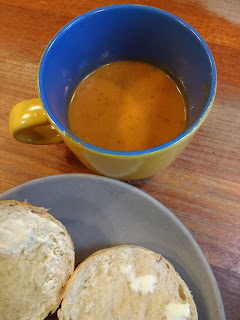