Cooking with the seasons is a way of life for me and this extends into my home baking too. We like to have some kind of cake or biscuit in the tin for an afternoon snack or an after dinner dessert so I bake most weekends in order to keep the tin topped up. As the seasons pass I look at what I have to hand and what is in need of being used and this usually helps me decide what I shall bake. Sometimes this is as simple as some over ripe bananas in the fruit bowl or sometimes it is to use up a glut from the allotment.

In that regard January is an odd time of year because the available produce from the garden isn't going to make a tasty treat. Sprout flapjacks anyone? Or how about a leek mousse?!

However, what I do have to hand is odds and ends of things in jars - little bits of mincemeat leftover from Christmas pies, some cranberry sauce, a bit of apple sauce, and half filled jars of jam.

Before Christmas I made quite a lot of Plum & Mulled Wine Jam. In fact, I sold out twice so had to restock, which was fantastic. It was a great way to make a dent in the bags of frozen plums in the freezer too after a bumper crop and in fact the only hiccup in the supply and demand loop was the rather slow delivery of some jam jars. As a result, I didn't have quite enough of my little 110g jars available at the time to bottle the whole of the third batch of jam so I had decanted it into spare 340g so as not to waste it.

Plum & Mulled Wine is certainly a flavour that screams Christmas but, as you might expect, it doesn't sell that well after Christmas. Even harder to sell two 340g jars of the stuff. So, time to find a way to use it up.

A January tidy-up of the book shelf required a rather pleasant afternoon thumbing through past editions of The Good Food Magazine; ripping out recipes to try and recycling the rest. In an October edition I found a recipe for a plum and ginger cake that sounded like one I would like to try next August when the plums are back in season. Although, having said that, my experience of pieces of plums in cakes is that they are glorious on the first day and progressively soggy on the subsequent days, and eventually fluffy with mould. So, yes, nice idea if you want an impressive dessert for a family meal or cake for an afternoon tea with friends but not ideal when trying to restock the weekly cake tin.

And so I wondered if replacing the fresh plums with jam might help to avoid the sog, and maybe Plum & Mulled Wine Jam would be even better, complimenting the spices in the cake. So, with that change and some fiddling around with the sugar quantities and spice mixes, I came to make a Flapjack Topped Plum Ginger Cake on a Sunday afternoon. And I can confirm this Friday morning as I tuck into a slice for elevenses that there still isn't a hint of sog.

Preheat oven to 180°C and grease and line a small rectangular cake tin. Put the butter, sugar, syrup and treacle into a large bowl and place in the microwave, 30 seconds at a time until the butter is melted then mix thoroughly together. Stir in the eggs then add all the dry ingredients and stir well. Spoon the batter into the cake tin, leaving about 2 tbsp of the batter in the bowl. Dollop the jam over the top of the batter until mostly covered. Add the remaining flour, oats and ginger to the remaining batter and mix together. Carefully drop/crumble this mixture over the jam until mostly covered. Bake for 25-30 minutes then leave to cool completely in the tin. 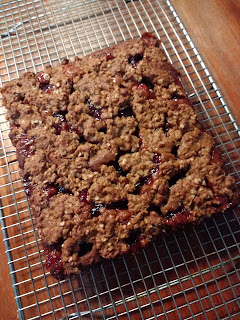