With food waste really hitting the headlines and as Hugh Fearnley-Whittingstale's new series about waste on the TV this week, it is alarming that so many pumpkins will be thrown in the bin this week. It is estimated that 18000 tonnes of pumpkins will end up in the bin after Halloween. Sadly, most people who buy a pumpkin at this time of year do so to only carve it into a lantern and have no idea how and no inclination to eat it.  And yet pumpkins are amazingly versatile vegetables and can be used in many different ways in the kitchen from savoury recipes such as curry to sweet bakes such as cakes. 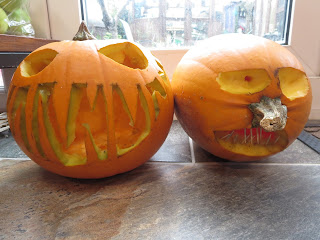 I grow pumpkins every year, with the hope that at least two will be big enough and impressive enough to make into Halloween lanterns. Growing anything is not an exact science so it is impossible to only grow what you need for Halloween. One year I accidentally grew 19 pumpkins! Since then, I have become something of an expect in finding ways to use pumpkins. My All Hallows Marmalade is an orange marmalade with pumpkin. My Lime Pickle is a lovely chutney suitable for Indian food that contains pumpkin, and in the absence of mango, I use pumpkin to make a "Mock Mango Chutney". Even my Tomato & Piquant Pepper Chutney has pumpkin in it, as does my "No Added Sugar Tomato Ketchup". But I use most of my pumpkins up in every day foods such as soups and cakes.

I think the problem starts when people think about either trying to eat pumpkin as an ordinary vegetable or they think about making something like a pumpkin pie. Plain boiled or steamed pumpkin is pretty gross. It is bland and the texture isn't all that pleasant either. However, that lack of flavour makes it wonderful for using in recipes because it takes on the flavours that are added to it so it is ideal in curries. I use small strips in stirfries because it adds colour and crunch without changing the over all flavour. Similarly it can be added to casseroles where it is hard to tell the difference between that an any of the root vegetables floating around in the gravy. Whereas pumpkin pie may be pretty disgusting, pumpkin works brilliantly in other bakes. In cakes it can be grated in in much the same way as carrot is used, or it can be steamed and mashed first and the added to the batter of things such as pancakes or drop scones. Here, the flavours of mixed spice work perfectly to make satisfyingly warming autumn bakes.

So, how to avoid wasting your pumpkin lantern.

When I carve (or rather when my daughters carve their pumpkins) we save the bits that are cut out for things such as eyes, mouth etc. This year, I grated the flesh straight off the skin from these fiddly little bits and had enough grated pumpkin to make Lakeland's medium pumpkin cake. This I decorated to look like a pumpkin and we ate it at a Halloween party. 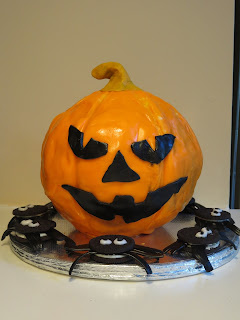 Today (Tuesday), 3 days after Halloween, I brought in the smaller of our two lanterns and set about chopping it to pieces. Lanterns tend to keep better if an LED light is used inside them rather than tealight candles and with the cool conditions, this pumpkin was in really good condition. It took about half an hour to chop it up into cubes, cutting off the dried out exposed surfaces and the skin. In total, I had 2lb 12 oz of cubed, usable pumpkin from this one lantern. 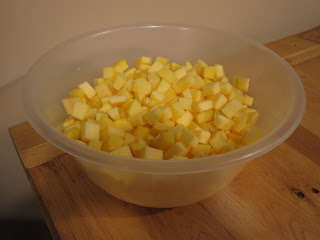 This evening I used 1 lb of pumpkin, and l lb of butternut squash to make a batch of soup that I bagged up to freeze. It made 6 portions in total. Then I made some pumpkin salsa to go with our dinner. This was a new invention for me but definitely something that is worth making again. I bottled most of this and put it in the fridge for future use. Tomorrow I will make a batch of Lime Pickle with the remains of this lantern and see about cutting up the other one.

It would have been wrong to have thrown the lanterns in the bin when they are such a useful vegetable but if you have a lantern and really have no inclination to eat its remains, or they have already gone mouldy, then at least put it into your compost bin or into your food waste and not the black bin. Next year think about all the tasty things you can make from your lantern, making that Halloween purchase a true bargain!

Put some oil in the bottom of a large saucepan and gently saute the cubed vegetables for about 5 minutes then add the garlic and fry for another minute. Pour in the stock and tomatoes and add the curry powder. Put a lid on the pan and simmer for 30 minutes until the vegetables are soft. Blend until smooth, taste and season as necessary. Eat hot or cool and freeze in portions. 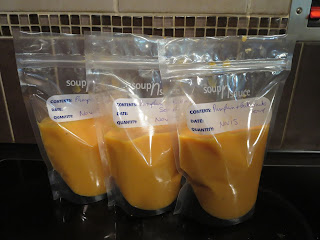 Put the cubed pumpkin in a small saucepan with the sieved tomato and bring to the boil. Simmer for 20 minutes or so until the pumpkin is soft then blend to make a small puree. In a medium saucepan, fry the onions until just beginning to colour then add the garlic, pepper and tomatoes. Pour the puree into the pan with these vegetables and add the other ingredients. Simmer with the lid off for about 10 minutes to thicken then taste and season if necessary. Allow to cool or pour into a glass jar and seal whilst still hot to keep for later. 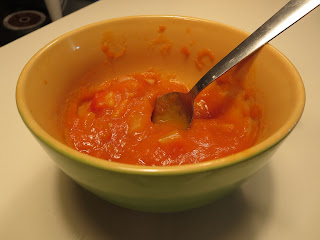