When I was a kid one of my very favourite biscuits was the "fig roll". I never did give much thought to what that lovely, squidgy filling was and despite the name, it would not have occurred to me that it had anything to do with figs. I'm not sure I even knew what figs were anyway back then.

I haven't had a fig roll in years but when I was thumbing through the Good Food Magazine the other day I came across a recipe for fig rolls. Actually, to be more actuate, it was a recipe for Sticky Toffee Fig Rolls. It was a recipe by Barney Desmazery, where he says he has based his recipe on the traditional fig roll in terms of shape and appearance but added chewy toffees to the figgy filling to add to the sweetness. I suspect that Barney has a bit of an issue with a sweet tooth as he is the same guy that wound me up in the spring by suggesting substituting the currants in hot cross buns for chocolate chips to make the recipe more child-friendly. Quite the opposite to me, as I usually find that cutting the sugar content of the recipe by a couple of ounces improves it. Anyway, it made me realise for the first time that it is possible to home-make fig rolls.

Given my general mission to eat less processed food, I was quite excited by the prospect of making a batch of fig rolls. Homemade food rarely tastes the same as processed food and, as much as the concept of highly processed food with questionable ingredients grates against my food preferences, sometimes I actually prefer the shop-bought version! I suspected fig rolls might be one of these times. None the less, I gave Barney's recipe a go, following the pastry instructions to the letter but substituting the chewy toffees for a grated ripe pear. Yeah, I know, they really aren't the same thing at all but I had a glut of pears at the time and had just been making a batch of Figgy Pear Mincemeat so I knew the flavours work together.

Anyway, the filling was delicious (even if not much like the shop-bought biscuit) but the pastry was all wrong. It was very much like a crumbly short-crust pastry and the whole thing was a bit like eating a sausage roll shaped mince pie. Clearly the pastry needed a rethink. 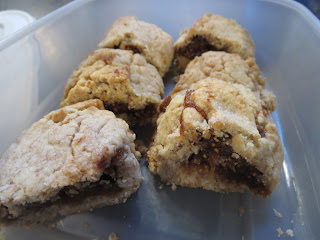 A week or two later I came across a recipe on the internet for fig rolls (don't know how, because I can't find it again now!). The pastry in this recipe was different to Barney's version and the figgy filling was just figs and water. So I decided to give it a go, using my modified version of Barney's filling and this new pastry. However, having made the filling, I discovered I was all out of wholemeal flour so had to use all plain. I decided that adding a bit of oat bran might help in the absence of wholemeal so I put that in as well.

I'm pleased to say that the whole thing cooked perfectly and came out looking like a fig roll. I could hardly wait for the biscuits to cool before trying one and that first one had slightly crispy pastry, which was lovely but not at all like the commercially made ones. However, the next day, after a night in the biscuit tin, the squidgy filling had made the pastry go soft and it was much more as I had imagined. It has been a while since I last ate a shop-bought fig roll so I can't directly compare these ones with those but I have a sneaky suspicion that my homemade taste better and I can guarantee that the ingredients are a good deal better! 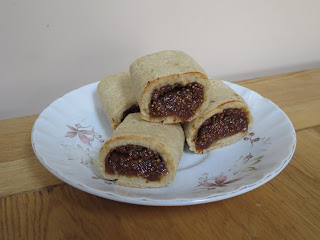 Place the figs, orange zest and juice, pear and caster sugar in a small saucepan and cook for 10 minutes until thick and sticky. Set aside and once cooled, blend. Preheat oven to 180°C and grease a tray. Rub together the flour, oat bran and margarine to form a crumb texture. Stir in the sugar and salt then add a little water to form a dough. Roll out the pastry, quite thin, into a rectangle and cut in half lengthwise. Spoon the mixture into long lines down the length of the two pieces of pastry. Brush the edge of each piece of pastry with milk then roll up. Cut each length into 6 pieces and press each one with the back of a fork. Transfer onto the baking tray and bake for 25-30 minutes until golden. Transfer onto a wire rack and cool.
Posted by Jammy Cow at 16:28