Sunday was the Stony Stratford Apple Day and this year, amongst other things, they were holding an apple charlotte competition. Last year my daughter had entered the apple crumble competition and had been pleased to win 3rd prize so as soon as I said we would be going to the Apple Day she asked what this year's competition was. She, like I, had no idea what an apple charlotte was so I looked it up on the internet. That was when I remembered that in the spring when I had been watching "Kew on a Plate" on TV Raymond Blanc had made an apple charlotte that I quite fancied giving a go when the apples were next ready.

So, armed with Raymond's recipe, my daughter and I set about making the charlotte. It is, essentially, a sweetened apple puree encased in bread and baked. Something like an apple bread and butter pudding or a summer pudding. Raymond's recipe called for two specific apple varieties - Cox's Orange Pippin and Orange Blenheim. However, what he was essentially getting at was that one variety was required (in this case the Cox) to cook and keep its shape, and the other (the Blenheim) needed to quickly turn to mush.

In the slightly eccentric collection of events that is my life, I happened to have been given some Cox's Orange Pippin apples. The man in the flat cap with a Scottish accent who lives 4 doors over had given a bag of them to my husband the other day when he'd been busy working in the front garden. The man (typically we don't know the name of most of our neighbours) had been to Windsor Great Park and had collected the apples from there (presumably with permission - it's not the sort of place you'd want to go scrumping!). Anyway, he said he thought that I would be able to make something with them.

As for the Blenheim, I didn't have any but one of our apple trees (variety unknown) produces apples that mush down beautifully.

The recipe requires making a caramel and cooking the Cox's in that, then making an apple puree from the Blenheims and using a bit of pectin to make it set. I don't have powdered pectin so I substituted the pectin and the caster sugar in that section for jam sugar (which is sugar with pectin added). Then, buttered bread (Raymond recommends wholemeal bread) is used to line a cake ring and the middle of the ring is infilled with the caramel apple mixed into the apple puree. This is then baked and allowed to cool and set before serving.

There isn't anything particularly difficult about making an apple charlotte so it was well within the capabilities of my daughter. However, it would have been useful to have had a photo of what we were trying to achieve and at times I felt Raymond was a little unclear - probably because we didn't really know what we were aiming for. None the less, we managed to create something that looked OK and that I was sure was going to taste great, given the apples that we had used. 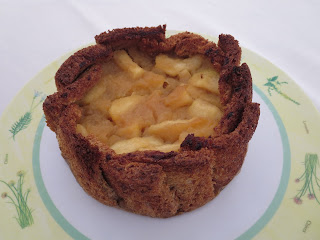 Shortly after taking the charlotte out of the oven, I phoned my mum for our usual weekend chat and told her that we had made an apple charlotte. She gushed at this and said that her mum had made apple charlotte when she was a kid and she loved it. However, it soon became clear that what she had been served as a child was not in the least like what was cooling on my wire rack. A moment of panic crept in and I had to Google images of apple charlotte just to reassure myself that we had made the right thing!

The next day, we took the charlotte to the Apple Day and into the judging tent. A lady was there, accepting the entries and we had a conversation about the competition. She said that for the first Stony Stratford Apple Day they had had an apple pie competition but not many people had entered. She suspected this was because people didn't like making their own pastry these days. Last year the competition had been apple crumble and loads of people had entered because everyone can make a crumble. This year they had wanted the competition to be something again that didn't require making pastry and charlotte had been suggested. I did point out that not many people know what one is and she agreed.

Nevertheless, over the next hour a good number of charlottes were placed on the table for judging. I soon began to realise that it was possible to be quite elaborate with the appearance of the charlotte. Next time we make one I think I will arrange the apples in a circle on the top surface rather than hiding them within the puree. It also seemed obvious that white bread was the bread of choice, giving a more squidged, molded shape that our rather pert looking wholemeal. Clearly Raymond Blanc doesn't know what he's talking about! Still, we had made ours, as I do with most of my cooking, to taste great. Not that this mattered in the end as when we came back to the tent after judging, my daughter's charlotte had been awarded 3rd place but was apparently untouched and untasted, unlike those in 1st and 2nd place. Silly me, I should have realised from 12 weeks of being forced to watch Great British Bake Off that showstoppers are a visual treat first and foremost. 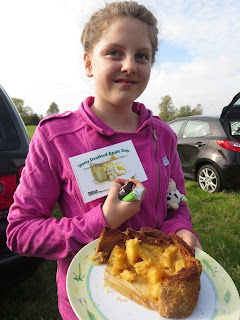 My daughter was happy with her 3rd place and she had been given a Snickers bar and Club biscuit for her efforts. I, on the other hand, was still interested to know how those lovely apples tasted, wrapped in their casing of wholemeal bread, so I went back to the tent to retrieve our entry. By then it was half eaten by hungry Apple Day visitors so I whipped the remains off the show bench and packed it up to bring it home. We ate it on Monday, cold and on Tuesday, reheated with custard. Needless to say, we appreciated the apples and the effort, enjoying it most when hot with custard. Definitely one to try again, perhaps tweaking the recipe and appearance next time, now that we know what an apple charlotte actually is! 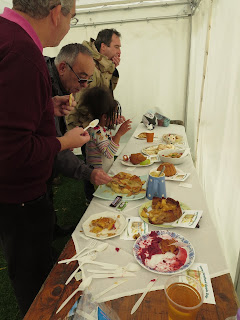 Having felt that our apple charlotte was not quite as it should have been, I decided I wanted to give it another go so in November I tried again, using a combination of Bramley apples (to mush in the compote) and some other unknown variety that keeps it shape when cooked. I decided too to use white bread and my medium hemisphere pan (from Lakeland). I also decided to line the pan with bread completely to make a dome. I don't know whether it is the convention to serve it chilled but we enjoyed it reheated and served with custard. The end result was much more pleasing. 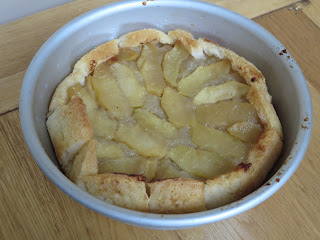 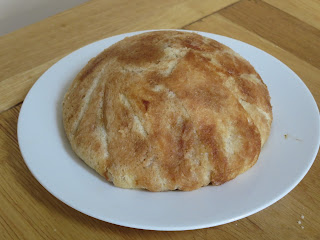 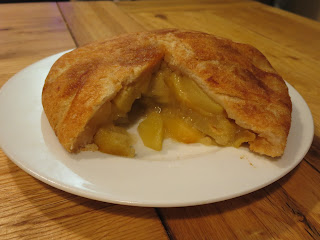