Here is a lovely recipe that looks and tastes amazing but is actually really easy to make if you have a bread machine to do all the kneading and proving for you. It is tasty to make with just the apple and cinnamon as the filling but on a recent occasion I had just finished making a batch of Apple & Cider Mincemeat and had a little smidge left-over so I added that as well and it made it super tasty! 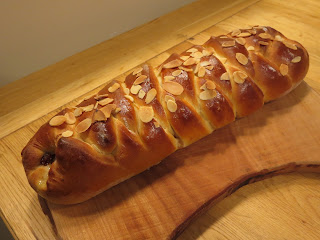 Add the liquids to your bread machine and then stack the flour, salt, butter, sugar and yeast on top (or do this in reverse if that's how your bread machine works). Set the machine onto it's dough setting and let it run through this program. Remove the dough from the machine and knock back on a floured surface. Roll the dough out to the rectangle about 30 by 25cm. Put the apple mixture down the middle of the length of the dough. Make diagonal cuts out and down from the apple to the edge of the dough on both sides at 2.5cm intervals. Fold the strips of dough in towards the centre to form a "plait". Place on a greased baking sheet and cover with greased Clingfilm and leave to double in size. Preheat the oven to 200°C. Brush the plait with beaten egg and scatter on some blanched almonds. Bake for 20 minutes until golden then transfer onto a wire rack to cool. Serve hot or cold, on its own or with custard, cream or ice-cream. 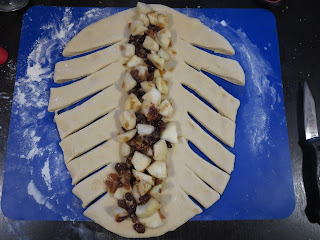 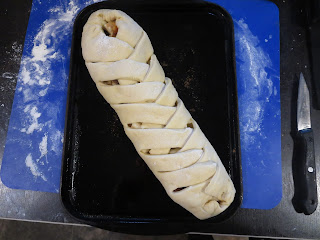 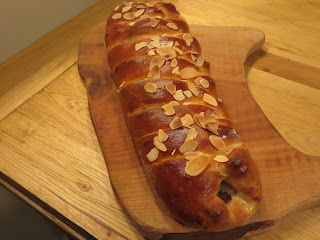