I would say that at this time of year that we eat like kings but as kings historically have gorged themselves on meat, believing vegetables to be unhealthy food for peasants, that wouldn't be quite correct. What I mean is, we eat well at this time of year, able to make some lovely meals not by spending a fortune on expensive food but by starting with the very freshest vegetables and in such quantities that you don't feel that you have to eek them out.

It's been 18 years since I first moved out of my parental home and during that time I have slowly developed as a gardener and a cook. I guess as we flick through magazines and images on Pinterest, we all have a vague idea of the sort of lifestyle we would like to lead and we have moments when we make an effort to follow that lifestyle. There will be other days when life gets in the way and reality is a long way from your idyll.

Today, as I stood in the kitchen preparing the Sunday roast I realised that this particular day I had lived the lifestyle that I had been aiming for. My day had started with a bowl of homemade granola for breakfast before setting up the bread machine. I spent the morning making a beetroot cake with a glut of beetroot, followed by a batch of pea and ham soup from some old peas I'd picked the day before. We had soup and freshly baked rolls for lunch. The afternoon was spent in my eldest daughter's bedroom, helping her decorate her wall with an intricate pattern along the lines of an elaborate doodle. We didn't finish the task before I had to stop to get the roast on; a chicken stuffed with homegrown onions and sage and baked in a chicken brick Steve had unearthed at the back of the garage, in a stock of onion, celery and elephant garlic. The potatoes for the roasts were homegrown and so were the carrots, parsnips, runner beans and corn on the cob. A full meal with all homegrown vegetables and every meal homemade from scratch. 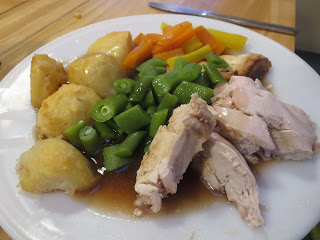 When you ask someone to describe their ideal day they are unlikely to describe such an apparently mundane day of domesticity but this day was special because it had been so ordinary and yet just the sort of way I want to live my life. I have always wanted to feed myself and my family well, knowing what goes into the food and for that food to be tasty. It was lovely to look back on my day today and realise that I had managed that today and, more importantly, had done it without consciously working at it. It had not been a slog, a driven attempt to achieve something for the sake of achieving it or proving a point. It had just happened and as all part of a relaxed and enjoyable family day. I'm just glad I noticed and took the time to bask, momentarily, in my private glory! There will be days in the future when my halo slips and I cram something from a packet hurriedly into my family as I bark irritated commands at them and go to bed feeling exhausted and unfulfilled. At least I now know that my dream is obtainable at least some of the time.


This is an unusual beetroot cake because it does not involve chocolate. It isn't overly sweet and it has a pleasant flavour that is difficult to pin down but has hints of coconut, general cakey-ness and, of course, beetroot.

Preheat an oven to 180 °C, 350 °F, gas mark 4.  Wash the beetroot then peel off the skin and cut off the top and tail.  Cut the beetroot into quarters and place in a food processor to finely chop, or grate with a cheese grater.  Place all the ingredients in a bowl and combine.  Grease the cake tin and spoon the cake mix into it.  Cook in the centre of the oven for 55 to 60 minutes until golden brown and a skewer inserted into it comes away clean.  Allow the cake to cool in the tin for 10 to 20 minutes then turn out onto a wire rack to cool completely. 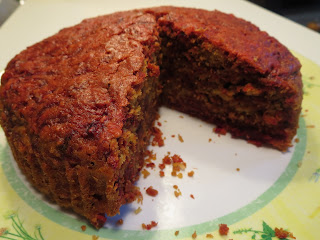