My daughter and I have been having fun dying her old school shirts in the last few days. Well, it's not as if she's going to need them again, having finished Year 11 abruptly in March. 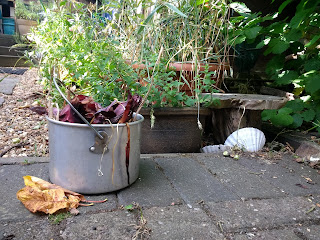 Mentally it took me a while to let go of school uniform. I have been washing and ironing school uniform for 12 years now and without the normal circumstances leading to the end of school, I couldn't quite believe that there wouldn't be a moment when she would have to return to school for a formal occasion where uniform would be expected.  However, we are now at the point where she would be starting her study leave anyway and exams have, the government assures us, definitely been cancelled, not to be reinstated.

My first step toward letting go of the uniform was to remove all the white shirts from her wardrobe and to run them through the washing machine on a 90°C wash with no detergent or conditioner. This would give them a thorough clean and remove any residues of detergent and conditioner from them too. This is scouring and is the first step towards dyeing. Dyes take better to cloth that is free from detergent, conditioners, oils etc. On the plus side, it does not in any way make them unwearable should she suddenly need her uniform for something. It is surprising, however, that even this did not remove the deodorant staining from the armpit area! 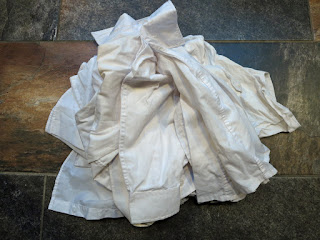 As it happened, there were 15 shirts in her wardrobe! This probably came about because she had "inherited" all her elder sister's shirts at the end of last school year when she had moved into sixth form and there was a mix of both long sleeved shirts for winter and short sleeved shirts for summer. Whatever happened, we were unlikely to get around to dyeing all 15 of them any time soon.

When the weather turned rainy last week, we suddenly became aware that the acer tree in our front garden was almost entirely blocking the path to the front door. When hadn't really noticed before because we had mostly been coming and going via the back door but also because brushing past in the dry was unremarkable. However, when it became wet we realised that it was making for an unpleasant experience for any delivery drivers. Hence, my husband went out and hacked off a couple of branches.

A couple of autumns ago, I had scooped up a bundle of fallen leaves from the acer and stuck it in a pan of boiling water to see if it would yield a dye - and it did - a very strong dark grey one. So, with a couple of branches of fresh leaves at my disposal, I decided to see what colours we could get out of spring acer leaves. 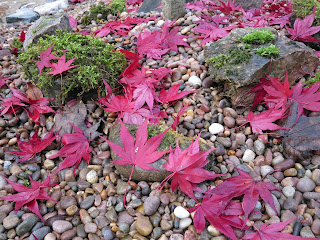 There are two main ways to dye using natural material. The first is, as I have explained, to put the natural materials into a pan with some boiling water. I usually boil things from about an hour then turn out the heat and come back to it the next morning once it has had plenty of time for the colours to be extracted. I drain off whatever it was that I was using and keep the coloured water, which is now a dye. 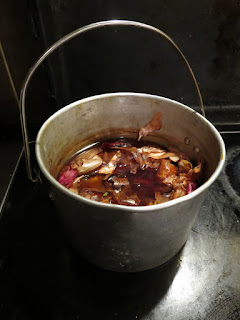 The second method is called "eco-dyeing" and this works by placing flowers, leaves etc. onto the paper or fabric, tieing it into a tight bundle and steaming it to extract the colours. This results in dyed patches, sometimes in splody patterns and sometimes in the very distinct shapes of the leaves and flowers used. 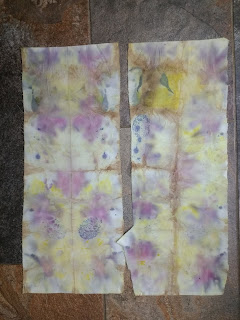 We decided that we would eco dye the first shirt and this we did by placing the acer leaves all over the shirt and wrapping it very tightly around a rust tin can. You see, some things can help to extract the dyes from the leaves or they can act to change the colour produced. These are "modifiers" and iron is a known modifier hence the use of a rusty can. In addition, we dipped some of the leaves in rusty water before putting on them shirt. At the same time, we stacked some leaves in between pieces of paper to see how they would eco-dye the paper. Then we put them both on to steam for an hour and a half.

Not opening the bundles as soon as they are cool enough to handle is something of a challenge so we opened the paper one straight away. We managed to resist opening the shirt until the next morning and we were rewarded with bright pink leaf shapes and rusty stains. However, upon rinsing the shirt, the pink changed to a kind of grey colour. I hung it up to dry and over time other colours developed, with various hues of purple, grey and hints of green - especially in those stained armpit areas! 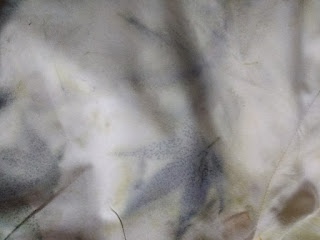 With plenty of acer leaves left, we boiled up some leaves to see what colour they would yield. After leaving it all day, we had a lovely bright pink colour so I dipped a shirt in that and left it to soak for a bit.

By the way, it is necessary to "mordant" fabric before dying it. This means to treat it with some kind of chemical that helps the dye to adhere to the fabric. There are various things you can use for this but we use alum, which we bought online. 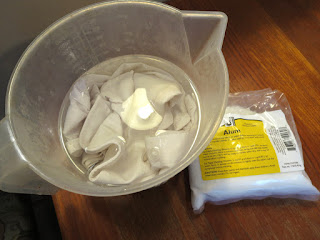 When I removed the shirt from the dye it was a lovely shade of pink but I didn't really expect it to remain that colour upon rinsing, drying and ironing. However, I was pleasantly surprised that it did so that was a win!

Whenever I make a dye pot I always like to do one dyeing with it first and then to try adding a modifier to it to see if we can change the colour and dye something else with the new colour. It is often really surprising what colours can be made and also which additives cause the change. Having had some success with iron with acer leaves on our eco-dyed shirt, I tried adding that to the dye pot but the dye remained stubbornly pink. So instead I tried adding a little water from a jar I had created mixed with ash from the fire place. This instantly turned the dye a dark blue colour. I love a bit of kitchen chemistry! 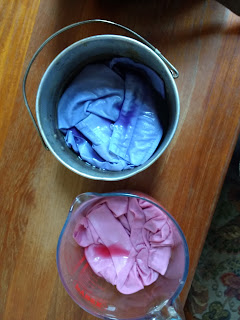 So, with a new colour created, we grabbed another scoured and mordented shirt and tied some rubber bands around it do that we could try tie-dye in this new colour. By the time this one had been dyed, rinsed, dried and ironed it was a grey colour with an attractive marbling effect caused by the tie dye.

We still had an abundance of acer leaves so this time we decided to combine natural dyeing and eco dying. I made a dye pot from avocado skins and arranged iron-dipped maple leaves over the fourth shirt. We then tied it into a tight bundle, boiled it up in the avocado dye for an hour and a half then left it for several hours. It was great fun to see the mix of peachy colours from the avocado, interspered with pink marks from the leaves, with faint leaf-shaped outlines like an impressionistic watercolour. 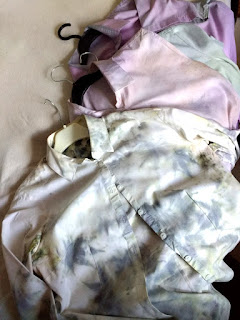 Well, we didn't get to the end of the acer leaves from the prunings but we certainly had a lot of fun experimenting with natural dyes and creating four very different shirts using basic kitchen chemistry. 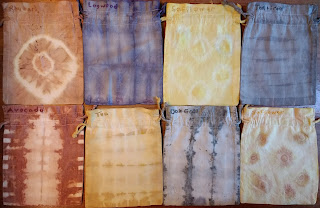 If you fancy giving natural dyeing or eco-dyeing a go, here are the basic steps.

1) Scourer your fabric by washing it at 90°C with no detergent for fabric conditioner.
2) Soak the fabric in a mordant such as alum.
3) Boil some natural materials in water for an hour and leave to soak over night to create the dye pot.
4) Set up the fabric with rubber bands, string etc if you wish to tie-dye it, or arrange with leaves and flowers if you wish to eco-dye it.
5) Soak the fabric in the dye pot or heat it in the dye pot for an hour and half.
6) Leave to fabric over night.
7) Remove the fabric from the dye pot and undo it.
8) Rinse and hang to dry away from direct sunlight.
9) Once dry, iron it. 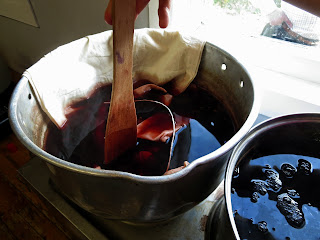 Here are some of the kitchen and garden natural materials we have used successfully in our natural dyeing experiments: 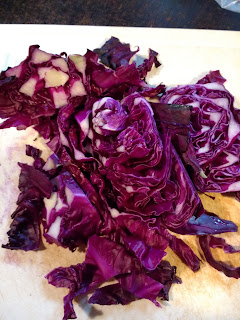