Last Saturday was the end of the long run of beautiful weather we have been having recently. The forecast for Sunday was for the temperature to plummet, bringing with it the possibility of frost. It is one of those things about May, it is easy to get lulled into a false sense of security and to push ahead  enthusiastically. I have learnt to hold fast and to not plant out tender plants into the garden until the end of May/beginning of June. Even so, we had a very healthy crop of potatoes poking their leaves out above the soil and they would surely be damaged by a frost.

Even with the forecast, it was hard to believe that there may be a frost. Often when one is forecast, it can mean for somewhere else and not for us in our sheltered spot in the warmth of a city. So we decided that earthing up the potatoes would help to protect them from the frost but we probably didn't need to cover them in newspaper or fleece. So there I was on a hot Saturday afternoon attempting to bash solid clay soil into submission so that I could break it up enough to rack it up over the potato plants.

And yet what really caught my eye was the elderflower bush in full blossom in the hedgerow that grows along the allotment fence. I was surprised to see it so advanced. I couldn't recall seeing any others in bloom yet locally but then I remembered that I am barely leaving the house so when would I have seen them? I felt the urge to rush over and pick them right then and there and before they went over but I had a job in hand - an exhausting job that would leave me too tired to be processing elderflowers once back at the house.  So I focussed on my task and continued to earth up the potatoes. 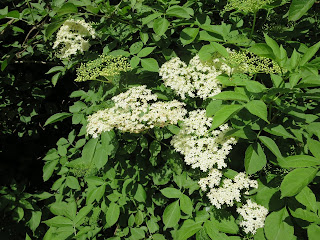 Job done, I walked over to the elderflower bush to inspect it. I wanted to see if any of the glorious blossom was within reaching height and to see if there were buds that would potentially be flowers in a few days time. Yes, on both accounts. So I went home knowing I could come back in a few days.

Well, the weather did take a turn and it got cold. And there was a frost - three in fact! And, despite our efforts, the potatoes got damaged. Although, I was reassured today that one of our allotment friends had covered her potatoes with fleece and they had still got damaged so we wouldn't have avoided the problem had we decided to cover them. 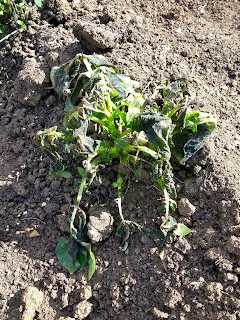 So for the past week I had to scrap my plans to plant anything else out from the greenhouse. Obviously I wasn't planning to plant out the tender stuff such as tomatoes, sweetcorn and French beans anyway, but I thought I would plant out the salads, leeks and peas during the week but it didn't make sense to yank them out of the cosy greenhouse to the shock of cold nights.

Instead, my thoughts returned to the elderflowers that had been so distracting on Saturday. So, I went out and harvested enough to set up a batch of elderflower cordial. This not only makes a lovely, refreshing summer drink, but it is a lovely flavouring to add to other desserts too. 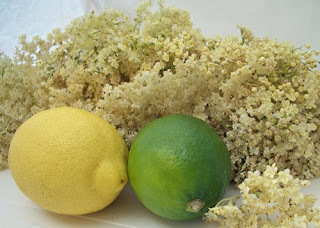 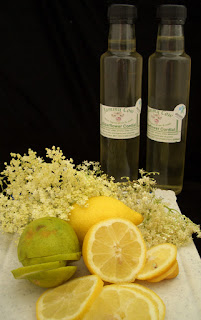 Anyway, if you fancy making elderflower cordial do it soon. Unlike so many things these days, the elderflower season isn't something you can get on catch-up or get round to when you have more time - it is now and needs your attention now if you want to make the most of it.

Soak the gelatine in cold water for 5–10 minutes. Combine the milk, cream and sugar in a saucepan.  Scald the liquid – bring just to the boil, but don’t let it bubble then add the elderflower cordial.  Heat the gelatine to melt it then add to the cream mixture.  Cover the surface of the cream with clingfilm and leave it to cool to room temperature then stir in the yoghurt. Pour into suitable containers then refrigerate for 4 hours until set. Eat out of the container or turn them out onto a plate. We often serve it with some diluted raspberry jam. 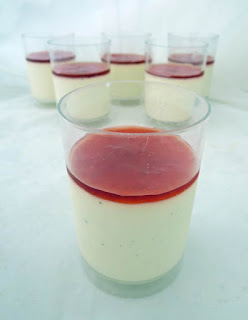