Regular readers of my blog will know that I have one child who will eat almost everything and another who is a fussy eater. On the grand scale of fussiest, she is doing OK and I know deep down that I have nothing to worry about. However, it is perhaps because I too was a fussy eater when I was a child that I want to help her overcome her fussiness. It is definitely more worrying to go out for a meal or to be invited around to friends' houses when you are picky about what you eat and I want her to avoid this embarrassment and unease. I also want her to be fully equipped with a good repertoire of foods she will eat before she leaves home so that she can feed herself a balanced diet and actively put vegetables onto her own plate.

Although my aim is for her to become less fussy, I don't actually know how to go about achieving this. Certainly sticking a plate of food she doesn't like in front of her and making her sit there until she eats it isn't going to work. Nor is me constantly going on at her in a disapproving way about what she does and doesn't eat. Honestly, I barely ever say anything despite sometimes feeling a good deal of disappointment (at best) or resentment when she leaves food on her plate or her shoulders slump when I reply to her question of "What's for dinner?" I have said on occasions, "Are you really going to leave that?", or "Couldn't you eat a bit more of that?" or "But I think it tastes nice." Even so she has accused me of picking on her about what she eats and showing favourism to her sister who eats with enthusiasm. As with pretty much everything else in life, it is not the reality that is important but rather the person's perception of it that matters. She may not see herself as fussy and I do not see myself as picking on her at meal times but we are, nonetheless, not seeing eye to eye at dinnertime. Clearly, the way forward is a difficult one that should include compromises on both sides - her making attempts to try new things and me saying nothing about food left.

I also know that hiding nutritious ingredients into food she likes is not the answer. This is likely to make her wonder why her favourite foods now taste different, odd, or wrong. It is also not teaching her to like those hidden foods so when she is at her friends' she still wouldn't know she liked it and when she is older she wouldn't know to put those things on her plate. And, ultimately, it is re-enforcing her dislike for certain foods but saying that they cannot be enjoyed unless heavily disguised by "nice" ingredients.

Having given this some thought and having done a bit of reading around the subject I have determined that there are a few things that are likely to improve the situation:

1) Me saying nothing.
2) Helping my children to express what they really feel about food to get beyond "I don't like it," and appreciate and respect that everyone has moods when it comes to food likes and dislikes.
3) Presenting her with tiny morsels of new food and inviting her to try them but not complaining if she doesn't - and repeating with the same food several times over an extended period.
4) Giving her a degree of choice in what she eats within a framework of what I want to make for dinner for the whole family. So, she could have her carrots raw or cooked; she could decide if we have mash or chips with our sausages; or she could choose to have more roast potatoes and less meat with our Sunday roast.
4) She can help cook dinner.

I have certainly found that when someone has a say in what goes on to their plates they are happier to eat what is there. It is weird to think that if we had an adult guest for dinner we would either ask them when dishing up the food which vegetables they would like or we would put them in bowls on the table and let them help themselves but we don't think to offer our children the same choice. Instead we assemble their dinner for them and then expect them to eat everything on their plates regardless of preference, mood and how hungry they are feeling. I remember as a child crying out "I don't like [food]!" when really what I meant was "I don't fancy that today," or "I'm too full to eat any more." I went for years saying that I didn't like Yorkshire puddings or custard just because both of these foods made me feel so full up that I didn't like the feeling in my belly afterwards. Children do not always have the words to express what they mean and adults are sometimes less understanding of their day to day preferences. My husband goes for long periods of not really fancying eating bananas and then he'll get in the mood for banana eating again. Admittedly this can make it hard to actually have the right level of bananas in the house for his particular mood but I do just accept this whimsical behaviour because he is an adult. If my daughter did this I would probably find it infuriating, especially if I had just bought a load of bananas because she "liked them last week". It is perhaps easier for a child to just blanket say they dislike a food than try to explain that they like, say, gammon pieces in a quiche but not a slice of gammon on their plate.

I have also found, over the years, that my girls are much more inclined to eat fruit and vegetables that they have grown themselves than ones I have just put onto their plates. They feel ownership of the whole process, from choosing the variety of seeds to sow, through nurturing them to putting them onto their plates. They want to like it because they started from the premise that it would be something good to grow. We can't grow all our foods but our children can certainly take an active role in the kitchen and choose what the cook for dinner and be involved in the preparation of it in various ways depending on their skills. Not only are they important skills to learn but when they have made the food themselves they want to like it and are more forgiving if it is not entirely to their taste. Where they might complain that, "the carrots are hard!" when you cook them, if they have cooked them they might say, "the carrots could have done with cooking for longer but they still taste alright."

So, with all this in mind, I have been attempting to involve my daughter in dinner more and I am especially pleased when she comes to me and says, "I want to have a go at making [food]" or "Would you make me [food] for dinner?"  It might be that I have to say that we can't make that until next week once I have bought all the ingredients for it but other than that I am unlikely to say no. It was therefore truly heart-warming when she came to me to ask if I could make a bone broth. Bone broth!
These are not words any parent would particularly expect a 13 year old girl to say and certainly not a fussy eater! Bone broth - that ridiculously nutritious food that they feed to invalids to help them recover from illness.

It turned out that her favourite YouTube recipe gurus had been making Japanese ramen noodle soup and the basis of this is bone broth. Since her big sister had introduced us to Japanese cuisine (see previous blog post), she has had an open-mind to anything Japanese so this combination of influences was bound to appeal. That's to say - Japanese, as inspired by her awesome big sister, recipe by her favourite cool YouTubers, and absolutely nothing to do with her nagging mother! Who cares, this is progress!

So, with the remains of a chicken carcass and some pork ribs, miso and mirin bought especially, I spent the required 8 hours (yes, 8 hours!), boiling up the bones to make the bone broth. This creates an amazing stock that has potentially hundreds of uses from soups to casseroles and is even so gelatinous that I used it as the jelly in a pork pie. To some of it I added the Japanese flavours - soy sauce, mirin and miso then cooked some egg noodles in it. She insisted that I bought some beansprouts too - I didn't argue! Topped with a hard boiled egg, this made an amazingly filling soup that was more than adequate to be the main meal and she supped it enthusiastically, perhaps not just because it was so tasty but because she had brought this novel meal to the table. I enjoyed it too; it's flavour and that my daughter was eating it without complaint. And you know what, when she got full and couldn't quite finish it, I said nothing! 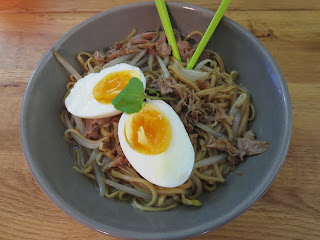 Put the chicken carcass and ribs into a large stock pot saucepan and fill with water. Bring to the boil then drain away the way, retaining the bones. This helps to remove some of the fat and makes for a less greasy stock. Refill the pan with water so that the bones are covered then add the other broth ingredients. Bring to the boil then reduce the heat to a gentle simmer and simmer, with the lid on for 8 hours. This should make plenty of broth which can be poured into suitable containers or sauce bags and put in the fridge or frozen for later use. Remove the ribs from the pan and pick the meat off them then splash with a little soy sauce to flavour. Set aside for later use in the soup but discard the other broth ingredients.
To make the soup, put the correct amount of bone broth into a pan depending on the number of people being served then add the miso, mirin and soy sauce and serve well. Bring to the boil then add the noodles and cook for a few minutes until soft. Stir in the beansprouts and a handful of the reserved pork meat and gently heat through. Pour into a bowl and top with a hard boiled egg cut in half.
Posted by Jammy Cow at 02:23