This weekend I partook in that odd tradition of all kitchen gardeners, and carefully arranged potatoes in egg boxes. The potatoes are my seed potatoes and the arranging is also known as chitting - a way to encourage strong, short green shoots to grow on them prior to planting them out next month. I don't honestly believe that chitting potatoes makes much difference to how quickly they grow away or how big the final yield is but the fact of the matter is that they have been delivered by the seed company and if I leave them in a dark paper sack until next month then they will have long, white sprouts on them that will probably get knocked off when I plant them out and I don't suppose that will help improve yields. 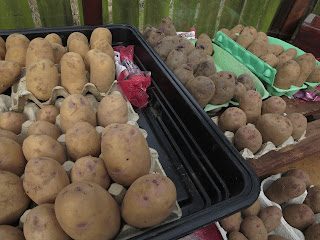 Anyway, this for me is the first dabble into the season ahead and there is a tingling of excitement with it, like those weekend mornings when you throw open the curtains to bright sunshine and actually feel as if you want to clean something! Potatoes are an important part of our kitchen garden and I feel a plate of food without a potato is a sad one. Well, I suppose if there is pasta, rice or bread in its place then that is OK but I'm certainly no caveman, happy with a hunk of red meat and a green salad. I like a good helping of complex carbohydrate on my plate, thank you very much! And being able to provide that straight from one's own garden is a satisfying thing.

Despite the feeling of a new season, the potatoes won't be planted until March and April and the first harvest will have to wait until June. So in the meantime, we are left with the old potatoes. With each passing day they become less and less good at being an eating potato as they slip into their natural springtime state of becoming a seed potato; shrinking, shriveling and sprouting. We have no choice but to either make use of these slightly springy, sprouting things or eat nothing but pasta, rice or bread until summer. I'm not adverse to any of those but I do like a roast potato with my Sunday dinner.

As I have said previously, old potatoes make rubbish roast potatoes, chips or sautees. Too much of the starch, which helps a potato crisp and turn golden, has been converted into sugars, making the potatoes over brown whilst never crisping up. Where is it easy to make a decent chip or roast from a freshly dug up potato in summer, it is a struggle at this time of year. However, if you have ever read the ingredients on a bag of Aunt Bessie's "roast" potatoes, you will see that the secret to faking that crispiness in the absence of good quality ingredients is the addition of a floury coating (rice flour and potato starch in this case - you may like to avoid the environmentally unfriendly palm oil and the sugars dextrin, dextrose and caramel that they also add). At home this can be achieved easily by tossing the potatoes in a mixture of flour and semolina between the par boiling and roasting steps. Below are my steps for making lovely roast potatoes whilst we wait patiently for that glorious day when the new season potatoes to be ready for harvesting. 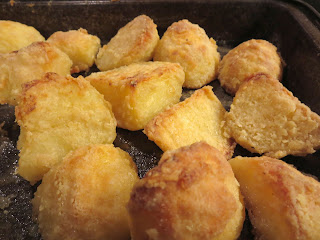 1) Peel the potatoes (yes, a lot of the fibre and nutrients of the potato are to be found in and just below the skin but at this time of year the skins are rubbish to eat so get rid of them).

2) Cut the potatoes up into roast potato sized chunks and place in a pan of boiling water and boil for about 5-8 minutes until just beginning to soften at the edges.

3) In the meantime, preheat the oven to 200°C and place a roasting tin in the oven with fat or oil in it. Saturated fats, such as dripping, goose/duck fat or lard, are best able to withstand the high temperatures of roasting without degrading so use these if you can, otherwise use vegetable oils. It is a misconception that vegetable oils (unsaturated fats) are better for you because when exposed to high temperatures they degrade and create new chemicals, some of which are harmful and even carcinogenic. It may go against everything you were ever taught about healthy eating but dripping, lard and goose fat are probably better for you when roasting potatoes - and they taste great too!

4) Drain the potatoes then put the lid on the pan and give it a good shake to roughen up the edges of the potatoes. Take off the lid and let them steam dry for a couple of minutes.

5) Put a handful of flour and some semolina on large plate or chopping board then tip the potatoes onto the flour and turn each one so that it is coated. If you are making roast potatoes in the summer with fresh potatoes you do not need to bother with this step.

6) Remove the roasting tin from the oven and tip the floured potatoes into the hot fat. Carefully turn each potato around in the fat so that it is coated all over.

7) Return the roasting tin to the oven and cook for an hour until the potatoes are golden brown and crispy. If you have properly coated the potatoes before putting them in the oven then there is no need to turn them part way through cooking.
Posted by Jammy Cow at 01:44