I bought some cream cheese the other day because it was on offer and I thought I would make a cheesecake. Unfortunately, I failed to engage my brain for the rest of the shopping trip and only realised later that I would also be needing some digestive biscuits for the base, some cream and some sort of flavouring. Cream cheese alone does not make a cheesecake.

Bearing this in mind, the next time I remembered the tub of cream cheese in my fridge, I decided to buy some digestives and whipping cream. I make cheesecake fairly often during the course of the year, particularly when the soft fruit is in abundance and I have various recipes that I use and adapt depending on what I have to hand and what we fancy eating. So, with the appropriate ingredients to hand, I scratched my head and wondered what sort of cheesecake I should make.

I really hadn't thought this through, it being March and all and there being a distinct dearth of soft fruit to hand. I do, of course, have soft fruit in the freezer but as I intend these for jam making they are conveniently frozen in 1 lb portions... or not so convenient when I only need 4-5 oz for a cheesecake. I briefly contemplated a lemon cheesecake but my lemons were past their best and you can't successfully grate the zest from a squishy lemon. So, maybe the answer was a vanilla cheesecake - a cooked vanilla cheesecake, or a New York cheesecake.

I Googled for a recipe but unfortunately the recipes didn't match the ingredients I had, calling instead for 3 tubs of cream cheese or ricotta or creme faiche. No good. Maybe I should just give up until I go shopping again.

Later, whilst making chutney, I was considering the last of the stored apples. About a pound and half of them left and in need of using and I only required a pound of them in my chutney. Half a pound to spare... so many possibilities. But how about an apple cheesecake. Apple cheesecake? Have you even heard of such a thing? As I have already said, I make a lot of cheesecake throughout the year and there are all sorts of possibilities for flavours. I've even made a pumpkin cheese but there are some flavours that just don't work. Mincemeat cheesecake was disgusting and plum doesn't work either! But apple? Pear and vanilla works so why not apple.

So I peeled, cored and chopped the apples, put in half a vanilla pod and just enough water to cover the bottom of the pan then cooked it until it was soft. Then I blended it with a tablespoon of icing sugar and created a satisfying thick puree, dotted with black vanilla seeds. This I added to the cream cheese, sugar, cream and egg required for my basic baked cheesecake recipe and then dolloped it on a crushed biscuit base. Some gently cooking and cooling later and I had created a very pleasing vanilla cheesecake with just a hint of underlying fruitiness. Very much a New York cheesecake but with the hint of apple... apple for the Big Apple... so Big Apple New York Cheesecake. The perfect name and the perfect dessert to finish our Sunday evening roast dinner. 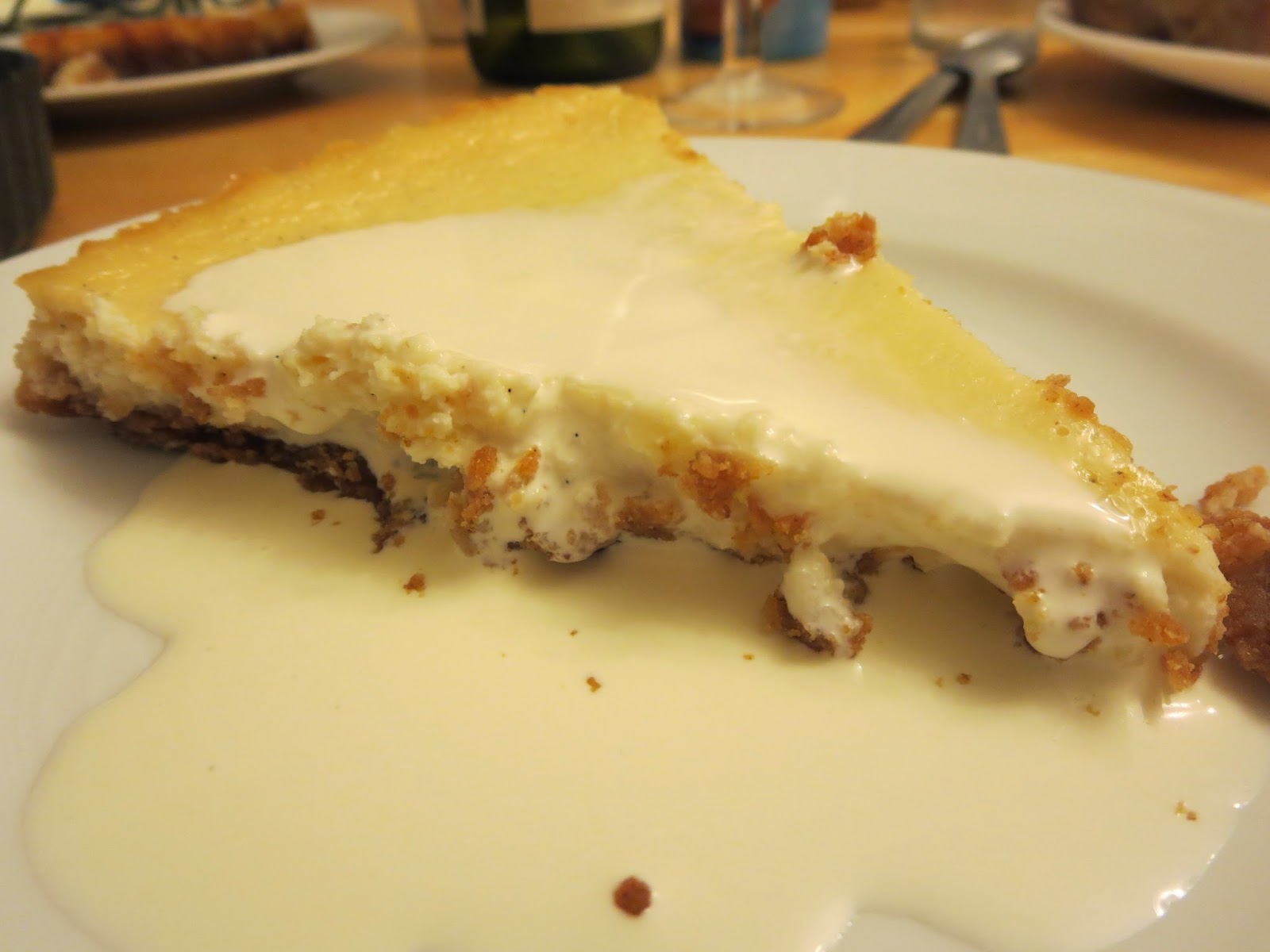 To make the base: Put the biscuits in a bag and crush them with the end of a rolling pin until finely crushed. Melt the butter and mix it with the biscuit crumbs. Press the mix firmly into the bottom of a flan dish and chill for about 1 hour.

To make the filling: Peel, core and chop the apples and place in a small saucepan with just enough water to cover the base of the pan. Split open the vanilla pod and add to the apple. Cook with the lid on for 10 minutes or so until soft. Remove the vanilla pod then put the apple into a blender with the icing sugar and blend until smooth. Allow to cool.

Preheat oven to 180 °C, gas mark 4. Cream together the cheese and the sugar until light and fluffy. Add the egg and cream and whisk until thick. Add the apple puree and stir in. Dollop the creamy filling onto the biscuit base and spread out evenly.  Place in the oven and bake for 20 minutes then turn out the oven and leave it in the oven for another 10 minutes. After that open the oven door and leave the cheesecake inside to continue its slow cooling so that it doesn't crack. Serve chilled.
Posted by Jammy Cow at 14:51