Rhubarb is a peculiar thing - peculiarly English too. You just don't see it used much in other countries and I have struggled to explain what rhubarb jam is to non-native customers at my stalls over the years.

I have always regarded it as a cheap food too - something so easy to grow that you can plant it once and just let it get on with its own thing from then on. Certainly I imagine that everyone who was "Digging For Victory" back in the day must have had some on their plot.

Having never felt the need to buy rhubarb before I really couldn't have told you how much it would cost but this week, out of curiousity, I looked it up on both the Tesco and Ocado supermarket sites and found that it was £6.88 per kilogram on that particular day. Having already harvested 3kg of rhubarb this year, I realised that would have set me back about £21! Astonishing, especially as there is still time to pick some more this season. 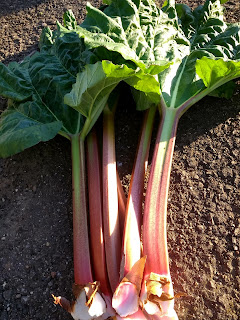 So, was I wrong all along to think of rhubarb as a cheap food? Well, with fresh raspberries coming in at roughly £12 per kilogram, it certainly doesn't compete with those price-wise. But then again, rhubarb isn't as squishy and hard to transport as raspberries so maybe that isn't a fair comparison. What about the other stems that we eat?

Celery comes in at roughly £3 per kilogram so in comparison, rhubarb is something of a luxury food! And, remarkably, on the day I was checking prices, asparagus was being sold for £6.59 per kilogram. So, like for like, asparagus and rhubarb are the same price. And yet I would have considered asparagus to be... a bit posh! 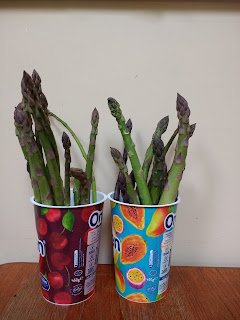 Having discovered that I should be showing more respect to my rhubarb, I decided that I needed to elevate it further than the humble crumble. As such, I combined it with some double cream and some fancy ruby chocolate to create Rhubarb and Ruby Chocolate Mousse, and scattered some homemade granola on top as a nod to rhubarb crumble. There you go, rhubarb, the fancy dessert you deserve!

Cut the rhubarb into pieces and place in a small pan with the sugar and water. Cook gently with the lid on for several minutes until very soft. Leave to cool then use a stick blender to puree. Next, cover the gelatine with water for a few minutes to soften. Put the chocolate in a small bowl over a pan of hot water to melt. Next, squeeze the water out of the gelatine then put it in small pan over a low heat until melted. Add a little of the cream to the gelatine and heat gently to incorporate the two as this will make the gelatine easier to pour. Whisk the remaining double cream in a large bowl until thick. Add all the ingredients to the cream (apart from the granola) and gently fold together until mixed. Spoon into suitable containers/glasses and put in the fridge to set. When ready to serve, scatter the granola on top if using. 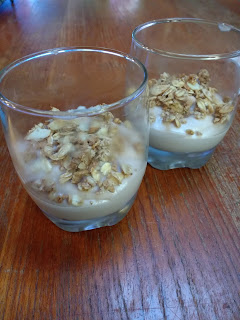