It felt as if Halloween should have been an anticlimax this year, what with rumblings about whether kids should go Trick or Treating or not. But as my girls have never had the desire to go Trick or Treating, they weren't going to miss that. Our only involvement normally is putting out pumpkins and having a bucket of sweets available for anyone who comes knocking, whilst suitably dressed up ourselves.

So on Saturday morning my youngest dressed in her Halloween themed dress, put on her bat wings and decorated the kitchen in Halloween decorations. Then we stuck on a Halloween playlist and gathered together our homegrown pumpkins to decide which ones to carve. Having selected three that looked suitable, we got stuck in, quite literally. 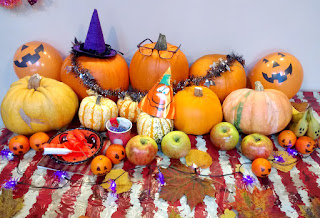 As usual, we saved the seeds and put those out for the squirrels. These little cuties had been tapping on the window all morning asking for treats so they would have to do for Trick or Treaters this year. 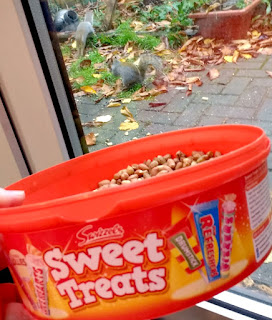 Once carved, we put the pumpkins out in the back garden so that we could enjoy them without giving the wrong impression that we were open for Tricker or Treaters. 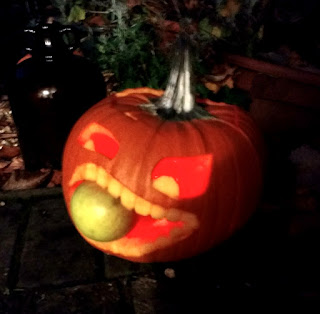 We also saved the bits of pumpkin cut out from the eyes etc. and I put that in the steamer so that I could turn it into pumpkin puree for use in recipes after that. As it happened, it was time to get dinner on by this point so I didn't make it into anything straight away.

We are the support bubble for my step-daughter, who lives with her cat just around the corner. She popped over in the afternoon to do some Halloween crafts with my youngest and I invited her to stay for dinner. We were having massive homegrown baked potatoes for dinner so it was easy enough to whip her up some vegan coleslaw and some baked beans to top her potato. She likes to add a few extra flavours to her beans so I fried up some homegrown courgette, mushrooms, shallots and garlic and she added soy sauce and curry powder to her taste. 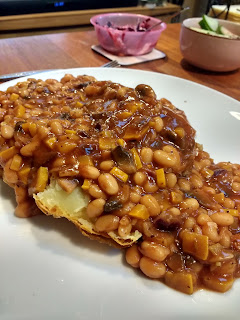 After dinner, and once Strictly had finished, I asked if she fancied cooking some pancakes. They would, of course, have pumpkin in them (and be vegan). She's always up for dessert so I tinkered with a recipe and made vegan pumpkin pancakes, using some of the pumpkin I had steamed earlier, and she cut them into Halloween shapes before adding maple syrup.

If you wish to make these non-vegan, halve the amount of baking powder, add an egg and use milk. 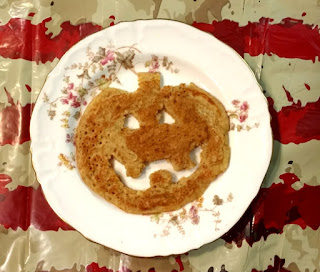 Anyway, my youngest went to bed, tired and feeling as if she had partied all day one way or another so definitely no feeling that Halloween had been cancelled in our house this year.