The other day when I popped round to the allotment to pick the purple sprouting broccoli, I realised that the rhubarb was more than ready to pick. On Saturday afternoon, I headed back to the allotment to pick all the rhubarb that was ready. I had a plan in my head - the first of the Rhubarb and Ginger Jam, and then a roasted rhubarb cheesecake. I'd not made a rhubarb cheesecake before but I was pretty sure I knew how I would go about it.

The rhubarb plants were impressive - large leaves on fat stems. Normally I use a rule of taking no more than 4 stems per plant but this day it just seemed obvious which stems needed picking. They were thick and ready. I gathered up the stack of rhubarb like a stash of firewood and took it over to the compost bin to chop off the leaves and hard bottom part then neatly tucked the stems into the bag I had brought with me. The two men, chatting on the opposite allotment eyed my bundle.

"I hope you have plenty of flour!" one of them called out.

Hmm... my plans would not require flour. There is plenty more you can do with rhubarb than make a crumble... besides, my crumble uses oats not flour. I said none of this, of course but called back, "I have a plan!" so as not to offend.

As I reached the allotment gates with my heavy load, another allotment tenant was on his way in. He looked at my rhubarb and called out cheerfully, "I hope you know how to make custard!"

Let me see, by this point it was 4pm and so far that day I had (as mentioned) re-organised my food cupboard, made lunch for the family, cooked a batch of flapjacks for Steve, baked a batch of cookie for one daughter and coconut macaroons for the other, had made a brine mix to soak some pork in for Sunday dinner, at that very moment the bread machine was busy kneading bread to go with dinner and when I got back home I would be preparing the rhubarb for jam, making a cheesecake and cooking dinner. Even if I had been making crumble I think it might have been acceptable to get the custard out of a tin.

Back home, it turned out I had picked 7lb of rhubarb. 3lb went straight for the first batch of Rhubarb & Ginger Jam. I put 3lb in the fridge to use later for either jam or chutney, depending on my mood. That left me the pound I needed to the cheesecake. This I roasted briefly in the oven, allowed to cool and later added it to the cheesecake filling mixture. It then needed to be cooked gently and cooled slowly so as not to crack and then chilled. Needless to say, it was too late to eat it that night by the time that was finished.

Sunday afternoon involved a lovely walk in the woods to see the bluebells, then home in time to slow cook the brined pork and finish off  making the Rhubarb & Ginger Jam. It turns out that Tom Kerridge knows what he is talking about when it comes to cooking amazing roast pork. Then to finish a rather lovely Sunday, out came my Roasted Rhubarb Cheesecake, dotted with some Rhubarb & Ginger Jam. And you know what, nobody complained that it wasn't crumble! 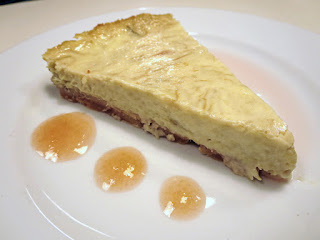 Preheat the oven to 200°C. Place the rhubarb in a bowl and toss with the caster sugar. Put the rhubarb in a shallow ovenproof dish in a single layer and cover with foil. Bake for 20 minutes then take off the foil and mash with a fork and mix in the lemon juice and zest. Leave to cool completely then tip the mixture into a nylon sieve to drain.

In the meantime, mix together the crushed biscuits and the melted butter and press into the bottom of a suitable flan dish. Chill for at least an hour to firm up.