I often talk in my blogs about making use of the fruit and vegetables that I grow but I sometimes feel that the boastful, flamboyant, and sometimes badly behaved fruit and vegetables, grab all the attention. It reminds me of a class full of children where some people just turn up reliably every day, listen carefully, follow instructions and get the work done without making a fuss. They are sensible, dependable and co-operative and yet come parents' evening the teachers struggle to put a face to the name on their class list despite longing every night to have more children in their classes that behave like them. In the vegetable world I am talking about things such as onions, potatoes, carrots and leeks. Where would our cooking be without them yet how often do we think to mention how their presence in a dish really made the difference? Well, I've decided that in 2016 I shall make an effort to acknowledge and appreciate these hard workers and give them the attention and credit they deserve.

My sister-in-law told me years ago that she didn't like potatoes. I can't say this piece of news particularly thrilled me at the time as I was attempting to cater for a family gathering and I already had someone who didn't like garlic or anything spicy, a general (but non-specified) fussy eater and a vegan to cater for. I can't remember what I cooked for that meal now but clearly we all got through it still on speaking-terms. Years later my brother- and sister-in-law got an allotment and dabbled with growing their own potatoes and the next time I saw them, my sister-in-law confessed that she now liked potatoes and understood that they could in fact be very tasty. It turned out that her dislike of potatoes had been a consequence of childhood trauma created by being served meal after meal of boiled "white" potatoes. I understood and sympathised as I too had endured a childhood like that. Not that I blame my parents. That was back in the day when supermarkets only sold "white" potatoes with the occasional opportunity to buy "red" potatoes. They were large, floury and general purpose. Since then shops and consumers alike have learnt the names of potato varieties and appreciate that certain potatoes are more suited to particular jobs than others. We have been introduced to the concept of "salad" potatoes and "new" potatoes and "roasting" potatoes and "baking" potatoes. Even the more disinterested amongst us can probably name at least two potato varieties. Jersey Royals, King Edwards, Rooster, Maris Piper, Desiree, Estima and Charlotte are all commonly found in the shops now.

Anyone who has ever grown their own potatoes will know that the first new potatoes of the year are as exciting as, say, the first strawberries. They are simply the tastiest potatoes ever and they need nothing cheffy done to them to make them better. Boiled gently for 10 minutes and served with a little melted slightly salted butter and they are divine. It is no challenge to create a beautiful dish when gifted such perfect ingredients. 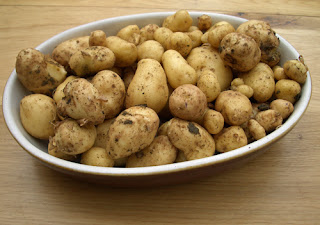 What is more of a challenge is making potato dishes that are a delight at this time of year. We may be able to go to the shops to buy another bag of potatoes whenever we like but the potatoes we buy this week are no fresher than the ones we bought last week. The farmers are not going out weekly to harvest potatoes at this time of year - probably just as well given the images of flooded or snow-covered fields that we see on the TV during the winter months. No, the potatoes in the shops now were harvested at the end of the summer and into the autumn and then put into temperature controlled storage. The only difference we make is that when we bring them home we don't store them cool enough and they start to sprout before we have used up the bag. Nonetheless, a potato in storage gradually converts more and more of its starch into sugars so that potatoes we eat in winter and spring are sweeter and harder to cook, tending to brown more rapidly when fried or roasted and determinedly refusing to crisp up. These potatoes do not make nice chips, wedges or roasts regardless of the care taken to select a suitable variety. We may as well boil them to death and reminisce about our mother's cooking!

If you can show me a way to cook an old potato out of storage at this time of year that renders it delicious, I am keen to learn. So, when my daughter, fresh from her evening YouTube recipe watching, declared that she wanted to give potato croquettes a go I was all ears. This effectively involved making some plain mash potato, shaping it into stubby cylinders and coating it in breadcrumbs before frying it. This is an ideal way to treat old potatoes as they do still make reasonable mash potato but it is the breadcrumbs and not the potatoes that crisps up. Panko breadcrumbs are perfect for this as they give a lovely crispy texture and are available in all supermarkets. 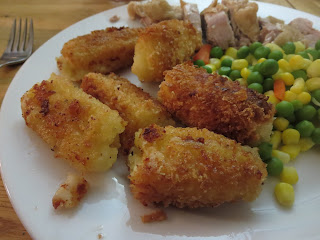 Peel the potatoes and cut into small cubes then boil until tender. Drain the water and put the potato into a large bowl with a couple of knobs of butter and some salt and pepper. Mash the potatoes thoroughly until there are no lumps. When cool enough to handle, take out spoonfuls of the mash and shape into croquettes and place on a board or plate. Using 3 small plates, scatter flour on one, beaten egg on another and some breadcrumbs on the third. Take each croquette in turn and roll it in the flour, dip it in the egg and then coat it in the breadcrumbs. Set aside until ready to cook. Heat some oil in 1 or 2 frying pans (depending on how many croquettes you have made) and shallow fry them, turning occasionally to brown all over. Remove onto a plate with kitchen towel on it to remove the excess oil then serve hot.

These turned out to be the best potato croquettes I had ever had. Forget those sad frozen things you can buy. They were beautifully crispy on the outside, delicately soft in the middle with perfect seasoning and without the weird taste that you can't quite pin-point that lurks around processed freezer food. Needless to say, we were keen for her to make them again on another occasion and as my brother- and sister-in-law were due for dinner a couple of days later I asked her if she would make them when they came. I'm pleased to say she was keen as this was the perfect opportunity to serve up tasty potatoes to a woman who once said she disliked potatoes and to show-off my daughter's cooking skills all in one go, whilst leaving me free to concentrate on creating spectacular steak & ale pies.

The second potato croquette session went as well as the first and our guests delighted in both watching our daughter cook them and in eating them. My daughter, of course, enjoyed their lavish praise too so I am glad she was brave enough to take the risk. 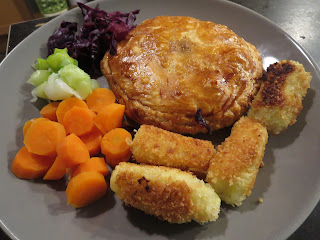 We were left with a little bit of leftover mash potato after making the croquettes but my daughter was quick to tell me that she had come across a recipe for sugared doughnuts that used mashed potato in them and she was keen to give it a go. Not having a deep fat fryer, I had always assumed we couldn't make doughnuts at home but she assured me these could be made on the hob. So the next day, with a friend over for the afternoon, I found myself in the kitchen with 3 girls and a great deal of floury mess but by the end of the afternoon we had enjoyed freshly made ring doughnuts and their friend was sent home with a paper bag of doughnuts to share with her family. Actually, the extra people in the kitchen was handy as we got a bit of a production line going with each person working on separate jobs and it might have been a bit of a strain to do it all on my own. 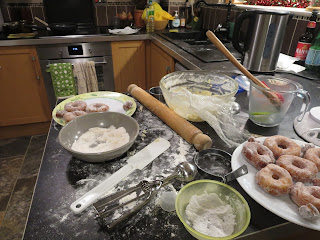 So there we are, quiet, unassuming plain white potatoes can have their moments of kitchen triumph after all!

Warm the milk to body temperature then add the yeast and pinch of sugar and leave to activate for 5 minutes. Put the flour, potato, sugar and vegetable oil in a bowl then add the milk mixture and combine until a dough forms, adding more flour if required. Turn out onto a floured surface and knead for a few minutes until smooth. Place back in the bowl, cover with greased Clingfilm and set aside for an hour to prove. Turn out onto a well floured surface and roll out until about 2cm thick. Cut out large circles of dough and then cut a smaller circle out of the middle to make a ring. Heat about 2-3cm of oil in a wok until just beginning to form bubbles below the surface. Test the oil by dropping in a little of the dough to see if it sizzles gently (not too vigorously). Put 2-3 rings of dough into the oil at a time. Leave to cook for a minute then flip over with a slotted spoon and cook on the other side for the same time until golden brown. Turn out onto a plate with kitchen towel on it to drain off some of the oil then toss on a plate of caster sugar (with cinnamon added if you like). Repeat until all the mixture is used. You can re-roll the dough to cut out more doughnuts and you can put the "holes" back into this or you can fry them as small doughballs and coat them in icing sugar to make "Yum yums".

To view the original YouTube video that inspired my daughter see it here at Sortedfood.com 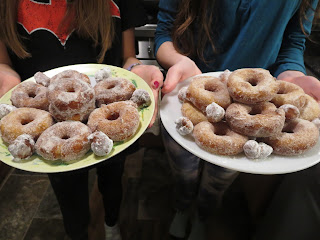