I popped round to my parents house yesterday and gathered up a bag full of pears from their patio. I usually think of conference pears as a late October/ early November crop but as these were on the ground, it would have been a shame to waste them.

Later I made a "lighter treacle tart" using the recipe from "Good Food Magazine", but using a pear instead of the apple. http://www.bbcgoodfood.com/recipes/lighter-treacle-tart. I've been making this recipe for a couple of year now and it's delicious but it only uses up one pear. 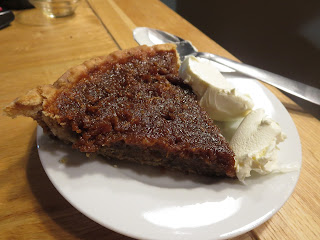 Earlier this week I had come across a recipe for pear, hazelnut and chocolate cake from "Good Food Magazine" that I thought might be worth a try when the pears were ready http://www.bbcgoodfood.com/recipes/1420/pear-hazelnut-and-chocolate-cake. As that moment seemed to have unexpectedly arrived, I looked the recipe up and decided it looked like a good way to make use of 5 pears. I checked my cupboard and, discovering I had everything else I needed, I set about making the cake.

The first problem I encountered was that the pack of hazelnuts I had in my cupboard were a couple of months past their best before date and smelt past their best. I decided to scatter these under my hazelnut tree in the garden and then enjoyed watching the squirrel returning repeatedly during the course of the day. Clearly Christmas had come early as far as he was concerned and he was busy stashing his unexpected bounty in various places around the garden.

With no hazelnuts, I decided to substitute them for pecans. I didn't actually have 100g of pecan left so I put in the 85g I had then added some oatbran to make up the quantity.

The next issue was the rather weird method for making the cake as it used the breadcrumb method of rubbing the fat to flour, which is decidedly odd for making a cake; being more commonly used for making biscuits or pastry. It didn't work very well and creaming the sugar into the butter first would have been a better method.

Anyway, having made a batter, I got it into the oven, only to discover it needed about half as much cooking time again before it was cooked through. Once cooked, however, it had a lovely golden, slightly crispy finish and, as such, I felt it didn't need to be glazed with jam.

Having made all these various alternations, I realised I had made quite a different cake to the one described in the recipe but it was really delicious so definitely one to make again. 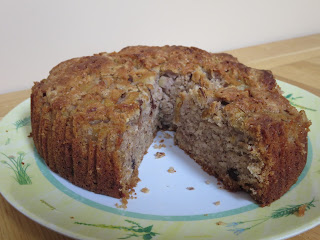