On a Saturday morning my husband takes my youngest daughter out for her weekly dance class and in the meantime I spend some quality time in the kitchen with my eldest daughter. Often I make a batch of jam or some more granola for next week's breakfast or some flapjacks for Steve. She, on the other hand, finds another biscuit recipe to try in order tp keep herself supplied with a mid-morning cookie at the school in the week ahead.

At the moment she is working her way through my "Colossal Cookie" recipe book. As the name suggests, it is quite a tomb so we have lots of recipes to try. It is, however, a bit rubbish. I think maybe it has been translated from American or something and many of the recipes she has tried have failed. Nothing to do with her but rather to do with odd things in the recipes, leading to overly sloppy dough or ridiculous numbers of biscuits.

A couple of weekends ago, we found ourselves in the middle of one such cookie recipe disaster and she was left with sticky dough and runny filling. I broke away from my own baking to help rescue the situation and with the addition of copious amounts of flour and some careful handling, we managed to assemble some biscuits. Even so we were left with about half of the chocolate filling. Not one for wasting food, I potted it up and popped it in the fridge for another occasion.

The "other occasion" presented itself a few days later when I bought a flan case from the supermarket on a whim and then decided to fill it with some freshly picked strawberries. The chocolate biscuit filling made the perfect flan filling, topped with sliced strawberries and I managed to whip up a tasty mid-week dessert in a matter of minutes. It was so tasty that this week I bought another flan case and made some more of the chocolate filling, sliced up a few strawberries and once again enjoyed a delicious summer dessert with very little effort. Definitely one to file for the future. 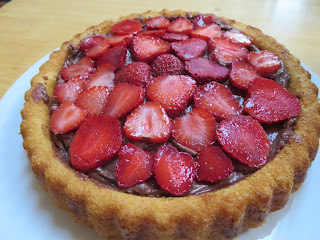 Grate the chocolate into the cream and heat in the microwave for about 15 seconds then stir until the chocolate is melted. Place in the fridge for about half an hour then whip until thick. Spoon the chocolate filling into the flan case and level. Slice some strawberries and arrange them on the filling. Return to the fridge to chill until ready to serve. 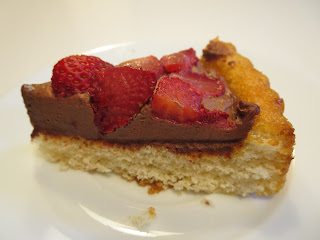